Summit to be at least five times faster than Titan 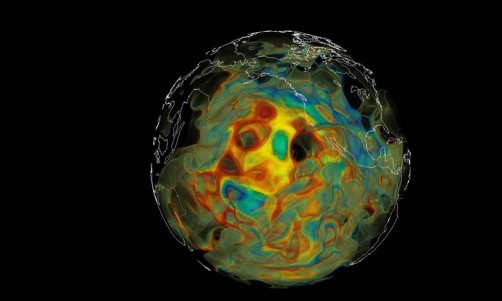 Summit will provide at least five times the performance of Titan, the OLCF’s current leadership system, for a wide range of scientific applications. The hybrid system will support DOE’s Office of Science in its broad science and energy mission, addressing the most challenging and impactful science problems for government, academia, and industry.

The system’s vendor, IBM, and major component suppliers, NVIDIA and Mellanox, are all participating in an open architecture technology collaboration known as the OpenPOWER Foundation. “Summit builds on the hybrid multi-core architecture that the OLCF successfully pioneered with Titan,” says Buddy Bland, the director of the Summit project at the OLCF. “The large, powerful nodes allow applications to achieve very high performance without having to scale to hundreds of thousands of Message Passing Interface (MPI) tasks. The combination of very large memory per node and the powerful IBM POWER and NVIDIA processors provides an ideal platform for data analysis as well as computation.”

Summit will feature more than 3,400 nodes, each with:• Multiple IBM POWER9 processors and multiple NVIDIA Volta GPUs • CPUs and GPUs completely connected with high speed NVLink • Large coherent memory: more than 512 GB of combined DDR4 and high bandwidth memory – all directly addressable from the CPUs and GPUs • An additional 800 GB of NVRAM, which can be configured as either a burst buffer or as extended memory • over 40 TF peak performance

Summit will have a dual-rail Mellanox EDR interconnect configured as a full, non-blocking fat-tree. The file system will be a GPFS Storage Server system with 1TB/s I/O bandwidth and 120 PB of disk capacity.

“High-performance computing has become a key part of technology advancement and scientific discovery,” says Jim Hack, Director of the National Center for Computational Sciences at ORNL. “The OLCF is being used to solve some of the most demanding and important science problems in the world. Summit will allow us to continue in this mission through the end of the decade.”

About the OLCFThe OLCF is a DOE Office of Science User Facility and was established at ORNL in 2004 with the mission of accelerating scientific discovery and engineering progress by providing outstanding computing and data management resources to high-priority research and development projects. Along the way it has delivered two-world leading systems. The first, a Cray XT known as Jaguar, ran the first scientific applications to exceed 1,000 trillion calculations per second (1 petaflop) and ranked as the world’s fastest computer in November 2009 and June 2010 on the Top500 list. The OLCF continued to expand the limits of computing power, unveiling Titan in 2013, a hybrid Cray XK7 capable of 27 petaflops. Titan was recognized as the world’s fastest in November 2012.

For more information about Summit, visit: https://www.olcf.ornl.gov/summit. ORNL is managed by UT-Battelle for the Department of Energy's Office of Science. DOE's Office of Science is the single largest supporter of basic research in the physical sciences in the United States, and is working to address some of the most pressing challenges of our time. For more information, please visit http://science.energy.gov.