Clusters with longer separations between atoms had enhanced catalytic activity. 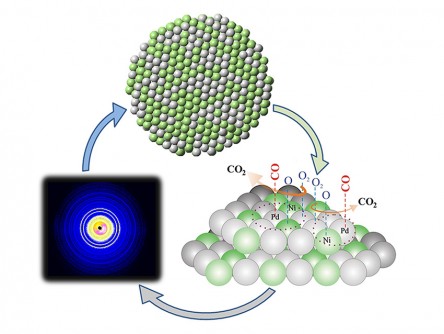 Image courtesy of Central Michigan University and SUNY at Binghamton

Palladium-nickel nanoparticles (top structural model) are synthesized and then exposed to reactive gases (lower right) while being probed with high-energy x-rays. The x-ray scattering pattern (lower left) is used to refine the structural model and direct further synthesis and post-synthesis treatment toward an optimal atomic neighborhood for nanoparticle surfaces.

Scientists have discovered that for palladium-nickel catalysts, certain surface characteristics, measured at the atomic level, sped the creation of carbon dioxide from carbon monoxide. To reveal the optimal atomic neighborhood for surface chemical activity, high-energy x-rays were scattered by nanoparticles while they were exposed to a reactive chemical environment.

Palladium-nickel nanoalloy catalysts have tunable parameters, such as particle size and atomic composition, that affect critical atomic-scale structural features. These key structural features include local bond distances and number of neighbors at surface sites, and are correlated with catalytic activity for the conversion of carbon monoxide into carbon dioxide. Surface sites with more atomic neighbors and longer ﬁrst-neighbor separations were found to be more active catalytically than those with fewer atomic neighbors and shorter ﬁrst-neighbor separations. This type of atomic detail has not been available by traditional studies and can aid the cycle of catalyst design by optimizing for structural parameters at the nearest neighbor level of an atomic environment. The atomic detail in a reactive environment was made possible by x-ray scattering techniques that involve high-energy x-rays and bright synchrotron x-ray beams able to penetrate sealed reaction chambers and resolve positions of atoms with high precision in minute amounts of nanoalloy particles. The work also demonstrated how various thermal and chemical environmental pathways alter the atomic neighborhood of nanoparticle surfaces.

DOE Office of Science, Basic Energy Sciences, for both the research and the use of Advanced Photon Source at Argonne National Laboratory.