Optimizing the Growth of Coatings on Nanowire Catalysts

Scientists chemically treated the surface of wire-looking nanostructures made of zinc oxide to apply a uniform coating of titanium dioxide; these semiconducting nanowires could be used as high-activity catalysts for solar fuel production 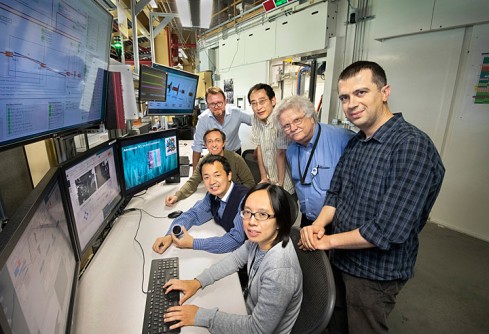 (Sitting from front) Iradwikanari Waluyo, Mingzhao Liu, Dario Stacchiola, (standing from front) Mehmet Topsakal, Mark Hybertsen, Deyu Lu, and Eli Stavitski at the Inner-Shell Spectroscopy beamline of Brookhaven Lab's National Synchrotron Light Source II (NSLS-II). The scientists performed x-ray absorption spectroscopy experiments at NSLS-II to characterize the chemical state of titanium dioxide (titania) coatings on zinc oxide nanowires. They chemically processed the nanowires to make the coatings—which boost the efficiency of the nanowires in catalyzing the water-splitting reaction that produces oxygen and hydrogen, a sustainable fuel—more likely to adhere. These characterization results were coupled with electron microscopy imaging and theoretical analyses to generate a model of the amorphous (noncrystal) atomic structure of titania. 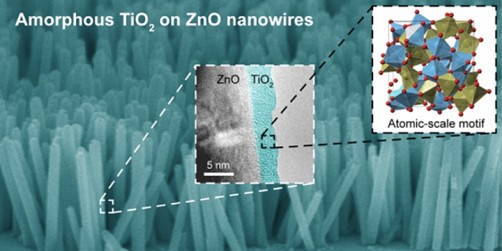 (Background) A false-colored scanning electron microscope image of zinc oxide (ZnO) nanowires coated with titanium dioxide, or titania (TiO2). On average, the nanowires are 10 times longer than they are wide. The white-dashed inset contains a high-resolution transmission electron microscope image that distinguishes between the ZnO core and titania shell. The black-dashed inset features a structural model of the amorphous titania shell, with the red circles corresponding to oxygen atoms and the green and blue polyhedra corresponding to undercoordinated and coordinated titanium atoms, respectively.

Newswise — UPTON, NY—Solar energy harvested by semiconductors—materials whose electrical resistance is in between that of regular metals and insulators—can trigger surface electrochemical reactions to generate clean and sustainable fuels such as hydrogen. Highly stable and active catalysts are needed to accelerate these reactions, especially to split water molecules into oxygen and hydrogen. Scientists have identified several strong light-absorbing semiconductors as potential catalysts; however, because of photocorrosion, many of these catalysts lose their activity for the water-splitting reaction. Light-induced corrosion, or photocorrosion, occurs when the catalyst itself undergoes chemical reactions (oxidation or reduction) via charge carriers (electrons and “holes,” or missing electrons) generated by light excitation. This degradation limits catalytic activity.

Now, scientists from the Center for Functional Nanomaterials (CFN)—a U.S. Department of Energy (DOE) Office of Science User Facility at Brookhaven National Laboratory—have come up with a technique for optimizing the activity of one such catalyst: 500-nanometer-long but relatively thin (40 to 50 nanometers) wire-looking nanostructures, or nanowires, made of zinc oxide (ZnO). Their technique—described in a paper published online in Nano Letters on May 3—involves chemically treating the surface of the nanowires in such a way that they can be uniformly coated with an ultrathin (two to three nanometers thick) film of titanium dioxide (titania), which acts as both a catalyst and protective layer.

The CFN-led research is a collaboration between Brookhaven Lab’s National Synchrotron Light Source II (NSLS-II)—another DOE Office of Science User Facility— and Computational Science Initiative (CSI); the Center for Computational Materials Science at the Naval Research Laboratory; and the Department of Materials Science and Chemical Engineering at Stony Brook University.

“Nanowires are ideal catalyst structures because they have a large surface area for absorbing light, and ZnO is an earth-abundant material that strongly absorbs ultraviolet light and has high electron mobility,” said co-corresponding author and study lead Mingzhao Liu, a scientist in the CFN Interface Science and Catalysis Group. “However, by themselves, ZnO nanowires do not have high enough catalytic activity or stability for the water-splitting reaction. Uniformly coating them with ultrathin films of titania, another low-cost material that is chemically more stable and more active in promoting interfacial charge transfer, enhances these properties to boost reaction efficiency by 20 percent compared to pure ZnO nanowires.”

“These treatments modify the surface chemistry of the nanowires in such a way that the titania coating is more likely to adhere during atomic layer deposition,” explained Liu. “In atomic layer deposition, different chemical precursors react with a material surface in a sequential manner to build thin films with one layer of atoms at a time.”

The scientists imaged the nanowire-shell structures with transmission electron microscopes at the CFN, shining a beam of electrons through the sample and detecting the transmitted electrons. However, because the ultrathin titania layer is not crystalline, they needed to use other methods to decipher its “amorphous” structure. They performed x-ray absorption spectroscopy experiments at two NSLS-II beamlines: Inner-Shell Spectroscopy (ISS) and In situ and Operando Soft X-ray Spectroscopy (IOS).

“The x-ray energies at the two beamlines are different, so the x-rays interact with different electronic levels in the titanium atoms,” said co-author Eli Stavitski, ISS beamline physicist. “The complementary absorption spectra generated through these experiments confirmed the highly amorphous structure of titania, with crystalline domains limited to a few nanometers. The results also gave us information about the valence (charge) state of the titanium atoms—how many electrons are in the outermost shell surrounding the nucleus—and the coordination sphere, or the number of nearest neighboring oxygen atoms.”

Theorists and computational scientists on the team then determined the most likely atomic structure associated with these experimental spectra. In materials with crystalline structure, the arrangement of an atom and its neighbors is the same throughout the crystal. But amorphous structures lack this uniformity or long-range order.

“We had to figure out the correct combination of structural configurations responsible for the amorphous nature of the material,” explained co-corresponding author Deyu Lu, a scientist in the CFN Theory and Computation Group. “First, we screened an existing structural database and identified more than 300 relevant local structures using data analytics tools previously developed by former CFN postdoc Mehmet Topsakal and CSI computational scientist Shinjae Yoo. We calculated the x-ray absorption spectra for each of these structures and selected 11 representative ones as basis functions to fit our experimental results. From this analysis, we determined the percentage of titanium atoms with a particular local coordination.”

To validate the theoretical result, Lu and the other theorists—Mark Hybertsen, leader of the CFN Theory and Computation Group; CFN postdoc Sencer Selcuk; and former CFN postdoc John Lyons, now a physical scientist at the Naval Research Lab—created an atomic-scale model of the amorphous titania structure. They applied the computational technique of molecular dynamics to simulate the annealing process that produced the amorphous structure. With this model, they also computed the x-ray absorption spectrum of titania; their calculations confirmed that about 50 percent of the titanium atoms were undercoordinated.

“These two independent methods gave us a consistent message about the local structure of titania,” said Lu.

“Fully coordinated atoms are not very active because they cannot bind to the molecules they do chemistry with in reactions,” explained Stavitski. “To make catalysts more active, we need to reduce their coordination.”

“Amorphous titania transport behavior is very different from bulk titania,” added Liu. “Amorphous titania can efficiently transport both holes and electrons as active charge carriers, which drive the water-splitting reaction. But to understand why, we need to know the key atomic-scale motifs.”

To the best of their knowledge, the scientists are the first to study amorphous titania at such a fine scale.

“To understand the structural evolution of titania on the atomic level, we needed scientists who know how to grow active materials, how to characterize these materials with the tools that exist at the CFN and NSLS-II, and how to make sense of the characterization results by leveraging theory tools,” said Stavitski.

Next, the team will extend their approach of combining experimental and theoretical spectroscopy data analysis to materials relevant to quantum information science (QIS). The emerging field of QIS takes advantage of the quantum effects in physics, or the strange behaviors and interactions that happen at ultrasmall scales. They hope that CFN and NSLS-II users will make use of the approach in other research fields, such as energy storage. 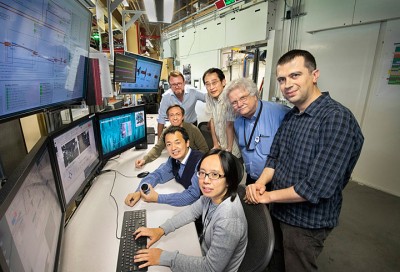 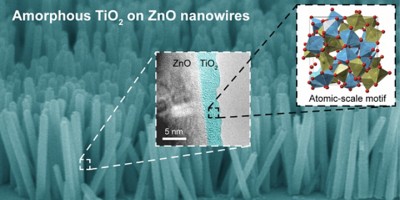 Caption: (Background) A false-colored scanning electron microscope image of zinc oxide (ZnO) nanowires coated with titanium dioxide, or titania (TiO2). On average, the nanowires are 10 times longer than they are wide. The white-dashed inset contains a high-resolution transmission electron microscope image that distinguishes between the ZnO core and titania shell. The black-dashed inset features a structural model of the amorphous titania shell, with the red circles corresponding to oxygen atoms and the green and blue polyhedra corresponding to undercoordinated and coordinated titanium atoms, respectively.