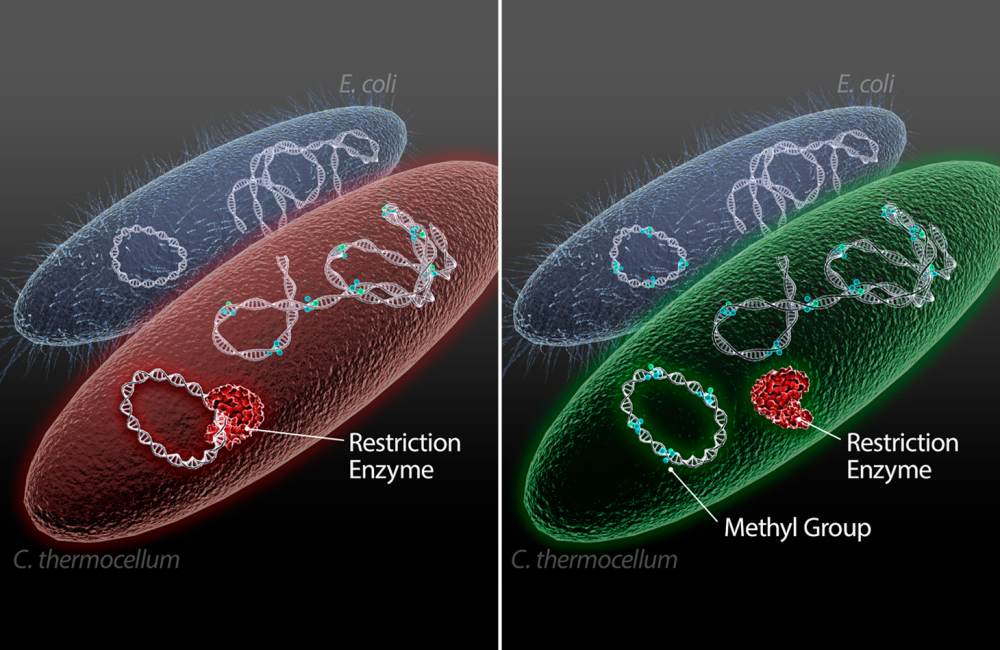 A new method uses E. coli to generate DNA with methylation patterns that target microbes recognize and accept as their own, facilitating customization of microbes for biofuels production.

Newswise — Scientists at the US Department of Energy’s Oak Ridge National Laboratory have demonstrated a method to insert genes into a variety of microorganisms that previously would not accept foreign DNA, with the goal of creating custom microbes to break down plants for bioenergy.

Microbes are the most abundant life forms on earth. They influence the growth of plants, digest food in the human gut, transform pollutants in the environment, and perform a host of other functions that affect everyday life.

Researchers at the DOE Center for Bioenergy Innovation (CBI) at ORNL are harnessing the power of microbes to turn non-food biomass like corn stalks, switchgrass and poplar into biofuels and bioproducts. To increase the efficiency of the conversion process, microbes are needed that can break down cellulose and ferment it into biofuels in a single set of reactions. Dubbed consolidated bioprocessing (CBP), this approach improves the economics of biofuels production.

Though the CBI team has demonstrated the feasibility of consolidated bioprocessing, they need better microbes to achieve greater yields of biofuels. The target: microbes that eat cellulose to produce desired fuels and thrive in high-temperature environments without oxygen.

“That is a complex set of traits, which is extremely difficult to engineer into a model organism like Escherichia coli or Saccharomyces cerevisiae [yeast],” said genetic and metabolic engineer Adam Guss of ORNL’s Biosciences Division. “Instead, we are pursuing use of non-model microbes that already have many of the desired traits.”

Enhancing or introducing target traits in these more unusual microbes can be challenging. There are few tools available for engineering non-model microbes, and the organisms have developed defense mechanisms that can foil attempts to insert new genes.

Meant to ward off viruses, these defense mechanisms guard microbes against unintentionally copying foreign DNA. To distinguish their own DNA from others, each microbe places a methyl group on a handful of specific DNA sequences. These methylated sequences are unique to the organism and act like a signature. Special enzymes called restriction enzymes patrol the cell and chew up any DNA that lacks methyl groups on the signature sequences.

Guss and his team have demonstrated a way to leverage this defense system to coax microbes into accepting bioengineered DNA as their own.

Using two sequencing methods, the scientists first identified a microbe’s signature sequences and the enzymes that methylate them. Then they expressed the enzymes, known as methyltransferases, in a common laboratory microbe, E. coli. With the right methyltransferases in place, E. coli are able to make copies of DNA with the expected methylation patterns, ensuring the target microbe would accept and use the new DNA.

The researchers recently published their method and the results of the experiment validating that the gene they inserted into Clostridium thermocellum ATCC27405—a CBP organism that has been challenging to transform—actually functions as anticipated. They have had similar success with ten other species and counting. These species were previously unamenable to genetic engineering.

“The more we do it, the more we learn,” Guss said. “It becomes more and more rapid and reliable as well.”

Guss foresees many benefits of this rapid domestication method for applied and basic research, especially in identifying gene function. With this approach, scientists can remove or overexpress genes of interest in microbes to determine how that affects the organisms’ traits. In addition to bioenergy, the method can be employed in biomedical and other fundamental research.

“What Adam and his team have done is to remove one of the major stumbling blocks to transforming these organisms,” CBI Chief Scientist Brian Davison said. “This opens the door to take these microbes with really tough-to-replicate traits and be able to tune them to do more of what we want, such as increasing biofuel yields.”

CBI is one of four Bioenergy Research Centers funded by the DOE Office of Science and focuses on custom engineering feedstock plants and microbes for a sustainable bioeconomy.

Co-authors on the publication include ORNL’s Lauren Riley as well as Lexiang Ji, Robert Schmitz and Janet Wespheling of the University of Georgia.

UT-Battelle manages ORNL for DOE’s Office of Science. The single largest supporter of basic research in the physical sciences in the United States, the Office of Science is working to address some of the most pressing challenges of our time. For more information, visit https://energy.gov/science.