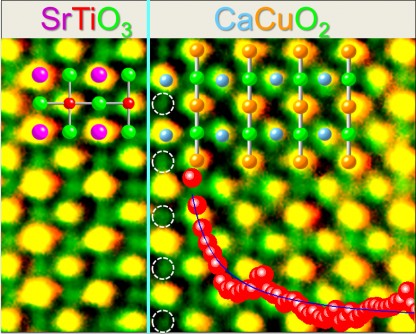 Newswise — Electron microscopy at the Department of Energy’s Oak Ridge National Laboratory is pointing researchers closer to the development of ultra-thin materials that transfer electrons with no resistance at relatively high temperatures.

The study delivers direct evidence of high-temperature superconductivity at the interface of two insulating oxide materials. The paper by researchers from ORNL and the University of Rome Tor Vergata (Italy) is published in Physical Review Letters.

“One grand challenge in science is to manipulate materials locally by changing the distribution of atoms and the electronic structure, and that’s what we’re doing here,” Cantoni said. “This is a way to control the material -- by manipulating the oxygen to make this interface superconducting.”

The ability to control and confine a material’s superconductivity could lead to two-dimensional superconductors for applications such as increasingly smaller computing technologies.

“We always want to scale down to get functionality in thinnest amount of material possible,” Cantoni said. “Usually when a material becomes thinner and thinner, its superconductivity disappears.”

“We were able to establish that a one-unit-cell-thick calcium copper oxide layer at this interface is superconducting and that the critical temperature approaches 50 Kelvin, which is considered high temperature superconductivity,” Cantoni said.

The team’s microscopy showed that superconductivity arises from oxygen ions that are incorporated into the interface calcium layer during the growth process. The extra oxygen ions pull electrons from the adjacent copper oxide layer, creating holes known to produce superconductivity.

The study is published as “High Tc superconductivity at the interface between the CaCuO2 and SrTiO3 insulating oxides.” Coauthors include University of Rome Tor Vergata’s D. Di Castro, F. Ridolfi, C. Aruta, A. Tebano, N. Yang, and G. Balestrino.

ORNL is managed by UT-Battelle for the Department of Energy's Office of Science.