The International Union for Pure and Applied Chemistry has announced formal verification of four new chemical elements, recognizing the Department of Energy’s Oak Ridge National Laboratory and its collaborators for the discovery of elements 115 and 117. 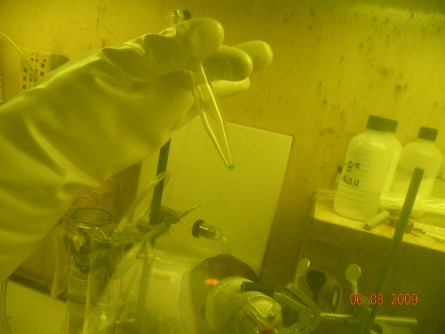 Berkelium-249, contained in the greenish fluid in the tip of the vial, was crucial to the experiment that discovered element 117. It was made in the High Flux Isotope Reactor at DOE's Oak Ridge National Laboratory.

Newswise — The International Union for Pure and Applied Chemistry has announced formal verification of four new chemical elements, recognizing the Department of Energy’s Oak Ridge National Laboratory and its collaborators for the discovery of elements 115 and 117.

In their report, IUPAC concluded that the collaboration of the Joint Institute for Nuclear Research, Dubna, Russia, and the Oak Ridge and Lawrence Livermore national laboratories had met the criteria for the discovery of elements 115 and 117. The IUPAC announcement invites the team to submit names and symbols for the two elements for review.

"These new elements expand our understanding of the nucleus, extend the periodic table, and provide evidence for the possibility of discovery of even heavier nuclei," says ORNL director Thom Mason. "The results demonstrate the power of international collaboration for addressing complex challenges in science."

Six atoms of element 117 were originally observed in 2010 during six months of intense bombardment of a berkelium target from ORNL with calcium ions at one of the world's most powerful heavy ion accelerators at JINR. Atoms of element 115, originally seen in earlier experiments at JINR, were also produced in the 2010 experiment from the decay of element 117. These results for elements 115 and 117 were confirmed in 2012 and 2013 by additional experiments at JINR and at GSI Helmholtz Centre for Heavy Ion Research in Darmstadt, Germany. Vanderbilt University and the University of Tennessee, Knoxville, also participated in the experiments.

The berkelium target material was produced during a six-month irradiation in the world's most intense thermal neutron flux at ORNL's High Flux Isotope Reactor, a DOE Office of Science User Facility. The resulting product was separated and processed during a three-month campaign at ORNL's Radiochemical Engineering Development Center, resulting in 22 milligrams of ultrapure berkelium. In addition to providing this unique target material, ORNL participated in all aspects of the experiments and contributed advanced detector technology to the effort.

The island of stability, originally proposed by Glenn Seaborg in the 1960s, refers to a region beyond the current periodic table where superheavy nuclei with enhanced lifetimes may exist. Such an "island" would extend the periodic table to even heavier elements, and the increased lifetimes would enable chemistry experiments on these elements.

"The element 117 results include the observation of 11 new heavy isotopes that represent our closest approach to date to the proposed island of stability," says ORNL's Jim Roberto, who played a major role in forming the collaboration with JINR, LLNL, UT and Vanderbilt. "These new isotopes continue a trend toward increasing stability with increasing neutron number for superheavy elements, providing evidence for the existence of the island."

The Russia-U.S. collaboration is currently searching for even heavier nuclei at JINR using a unique target of a mixture of californium isotopes, a byproduct of decades of californium-252 production at ORNL. A new detection system for radioactive nuclei developed at ORNL and UT is enhancing the discovery capability of this experiment.

Elements 115 and 117 bring to three the number of new chemical elements discovered by ORNL with its collaborators. Element 61, promethium, was originally observed in 1945 from the chemical analysis of fission products at ORNL's Graphite Reactor. Overall, isotopes from ORNL have helped enable the discovery of nine chemical elements.

UT-Battelle manages ORNL for DOE's Office of Science. The Office of Science is the single largest supporter of basic research in the physical sciences in the United States, and is working to address some of the most pressing challenges of our time. For more information, please visit http://science.energy.gov/.