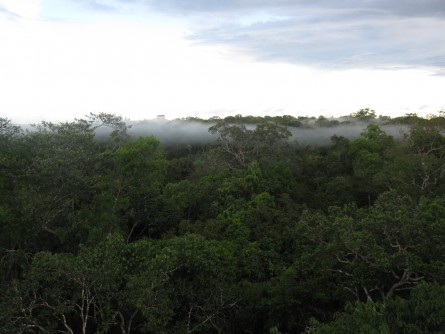 The future of tropical rainforests in the Amazon (pictured) and worldwide is the focus of a new research project that combines field experiments and predictive modeling.

Newswise — OAK RIDGE, Tenn., April 1, 2015—Researchers from the Department of Energy’s Oak Ridge National Laboratory will play key roles in an expansive new project that aims to bring the future of tropical forests and the climate system into much clearer focus by coupling field research with the development of a new ecosystem model.

The project is called the Next Generation Ecosystem Experiments-Tropics, or NGEE-Tropics. Its goal is the development of a model that represents how tropical forests interact with Earth’s climate in much greater ecological detail than ever before. This will help scientists explore, more accurately than is possible today, how rising temperatures, shifting precipitation patterns, increasing greenhouse gas levels, and other natural and human-induced changes affect tropical forests’ influence on Earth’s climate.

“Tropical forests cycle more carbon and water than any other biome, and as such they’re a critical player in the planet’s energy balance and in climate change. But there’s a lot we don’t know. Through NGEE-Tropics, we plan to dramatically reduce this uncertainty to improve future climate projections,” said Berkeley Lab’s Jeff Chambers, the principal investigator and project director of NGEE-Tropics.

More than a dozen researchers with ORNL’s interdisciplinary Climate Change Science Institute will lend their expertise in ecology, environmental science, biology, modeling and data management to the project.

“What’s really unique is this strong connection between modeling and observation,” said ORNL’s Rich Norby. “We are trying to get a pan-tropical view with the final outcome of a global model that’s sensitive to predicting the future climate.”

Over the next decade, NGEE-Tropics scientists will collaborate with other researchers to carry out experiments in tropical forests around the globe. This research will fuel the development of a first-of-its-kind tropical forest ecosystem model that extends from the bedrock to the top of the forest canopy. The model will capture myriad soil and vegetation processes at a resolution better than ten kilometers. This is the resolution that next-generation Earth system models will achieve during the project’s lifetime.

The team will take advantage of lessons learned from a separate DOE-funded initiative called NGEE-Arctic, an ongoing multi-institutional study led by ORNL that is examining similar uncertainties facing Arctic ecosystems.

“This modeling of the tropics is unprecedented in its scale, complexity and number of processes that are being incorporated,” said ORNL’s Scott Painter. “We’re building on the techniques that have been developed in NGEE-Arctic and extending them to the tropics.”

The tremendous biological diversity of tropical forests presents a special challenge for modeling. To meet this challenge, the NGEE-Tropics team will develop a “trait-enabled” modeling approach, integrating data on the variation in many characteristics that influence a plant’s success in a given environment. ORNL will contribute its developing database on root traits to this effort.

During the first phase of the project, which spans the next three years, scientists will assess what’s known about tropical forest ecosystems and how well these processes are represented in models. Several pilot field studies located in Brazil, Panama and Puerto Rico will also be developed in phase one that link modeling advances with field observations.

In Puerto Rico, ORNL researchers will lead a study to better understand the tropical phosphorus cycle by integrating experimental data into the lab’s recently developed phosphorus model. Phosphorus, a nutrient necessary for all plant and animal life, is particularly important in the tropics; its limited presence in weathered tropical soils influences overall ecosystem productivity.

“We intend to do detailed, mechanistic studies at the root-soil interface that are specifically guided by uncertainties in the models,” Norby said. “We’ll plan our measurements around modeling needs.”

Another pilot study in phase one will explore how tropical forests respond to reduced precipitation, which is expected in some tropical regions. The study, in Manaus, Brazil, will investigate changes in the forest carbon cycle resulting from low water supply during the dry season from June through September. This is important for understanding whether tropical forests will respond to drought by releasing instead of accumulating carbon.

And in Panama, scientists will use detailed datasets of species by species differences across regions to understand which characteristics enable some species to thrive under warmer or drier conditions, while others perish. The research will shed light on how forests dynamically respond to a warming climate.

Ultimately, the scientists will integrate what they learn from the pilot studies, and the more extensive field investigations in phases two and three, into their new tropical forest model.