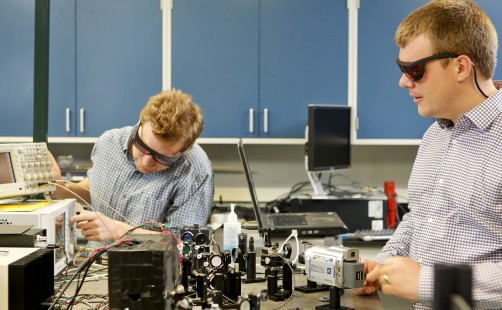 “Quite simply, under certain circumstances, our method enables us to see things we couldn’t see before,” said Raphael Pooser, co-author of a paper published in the journal Optica. He and Benjamin Lawrie used quantum correlated beams of light to overcome the fundamental detection limit of microcantilever-based sensors caused by intensity fluctuations.

“By pushing the noise limit lower than ever before, we enable these sensors to see things they couldn’t see,” Pooser said. “Imagine an image taken with so low contrast that all you see is a big gray square. Now imagine a technique that enhances the contrast to allow discernible features to emerge from that background.”

Their work overcomes fundamental limitations of detection derived from the Heisenberg uncertainty principle, which states that the position and momentum of a particle cannot be measured with absolute precision. The more accurately one of the values is known, the less accurately the other value can be known.

Turning to this discovery, Pooser said, “A similar Heisenberg uncertainty relation exists for the intensity and phase of light. We can surpass the quantum limit without violating the uncertainty principle by moving the noise out of the variable of interest and into an area that we don’t care about and don’t detect.”

Ultimately, the new technique, which uses two beams of light to cancel noise, results in a 60 percent error reduction. The result enables higher contrast imaging and detection of lower concentrations of particles than are possible with conventional sensors.

“This marks the first time quantum states have been applied to practical micro-electro-mechanical-systems, or MEMS, devices that are ubiquitous,” said Lawrie, citing as examples sensors to measure temperature, pressure, inertial forces, chemicals, magnetic fields and radiation. “The cantilever – which resembles a tiny diving board -- we used was an off-the-shelf component and the method we used to improve its sensitivity is highly compatible with existing sensing and imaging platforms.”

Among other possibilities, this work lays the foundation for integrating the sensor into an existing device such as an atomic force microscope, demonstrating that the proof of principle can be used to improve an existing sensor. Atomic force microscopes offer resolution down to fractions of a nanometer and are useful for imaging, measuring and manipulating matter at the nanoscale.

The paper, titled “Ultrasensitive measurement of micro cantilever displacement below the shot noise limit,” is available at http://www.opticsinfobase.org/optica/abstract.cfm?uri=optica-2-5-393.

The research was supported in part by a fellowship from the Intelligence Community (http://www.ornl.gov/science-discovery/national-security/program-areas/intelligence-programs) postdoctoral research and Laboratory Directed Research and Development programs.