ORNL Researchers Use Neutrons to Gain Insight Into Battery Inefficiency 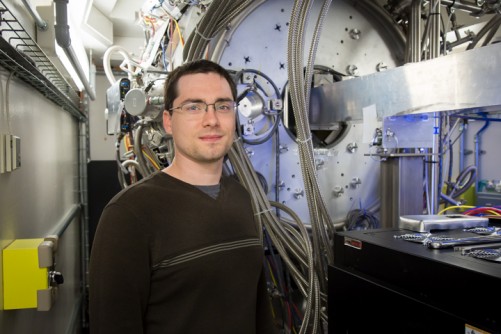 Newswise — Rechargeable batteries power everything from electric vehicles to wearable gadgets, but obstacles limit the creation of sleeker, longer-lasting and more efficient power sources. Batteries produce electricity when charged atoms, known as ions, move in a circuit from a positive end (anode) to a negative end (cathode) through a facilitating mix of molecules called an electrolyte.

Scientists at the Department of Energy’s Oak Ridge National Laboratory are improving the lifetimes of rechargeable batteries that run on lithium, a small atom that can pack tightly into graphite anode materials. The valuable ions are depleted as a battery charges, and they are also lost to the formation of a thin coating on a battery’s anode during initial charging. ORNL researchers used two of the most powerful neutron science facilities in the world to try to understand the dynamics behind this phenomenon.

In a paper published in the Journal of Physical Chemistry C, the ORNL researchers focused on the spontaneous growth of the thin coating, called the solid-electrolyte interphase (SEI). This nanoscale coating protects and stabilizes the new battery, but it comes at a cost. The electrolyte, a mixture of molecules composed of hydrogen, carbon, lithium and oxygen, is forced to break down to form this film.

“The big picture is to increase the amount of lithium we can put into a battery,” said Robert Sacci, lead author and Materials Science and Technology Division scientist. “When you develop a battery, you put in excess lithium because a lot of that lithium gets eaten up or taken away from usability to form this thin film.”

Sacci and colleagues used beams of subatomic particles called neutrons to delve into a battery’s atomic reactivity during its first charging cycle. Neutrons were necessary because they can easily enter three-dimensional structures and are sensitive to changes in hydrogen concentration, a major component of electrolytes.

ORNL researchers targeted anode samples with neutrons from the Spallation Neutron Source (SNS), the world’s most intense pulsed beam, and the High Flux Isotope Reactor (HFIR), the highest continuous-beam research reactor in the United States. They tracked the scattered paths of the neutrons after the beams penetrated the material, creating a constantly updating map of the sample’s molecular dynamics.

Neutron scattering is key to understanding battery activity on the atomic scale. While the diffracted beams of neutrons would appear to be a jumbled mess to most—like lights dancing off a disco ball in all directions—skilled scientists use these scattering signals to calculate chemical and structural changes while the SEI layer develops.

Is battery film friend or foe?

Once the SEI layer forms, it buffers degradation of the electrolyte and prevents a dangerous buildup of metal deposits on the lithiated-graphite anode, increasing a battery’s life cycle.

Sacci and his team wondered if a pre-made film could protect the anode while minimizing the consumption of lithium ions.

The ORNL scientists incorporated lithium atoms into vacancies within graphite through grinding at high force. The result was a powdery, charged anode material that they then dipped into an electrolyte solution.

A thin film formed around each lithiated-graphite particle, encapsulating it. At this point, the scientists were ready to subject samples to neutron scattering tests to gain a fresh perspective into how an SEI layer generates during initial charging of a lithium-ion battery.

“With VISION, we can measure the vibrations of atoms, which tell us how they are bound within molecules, and with SANS, a scattering instrument at HFIR, you’re looking more or less at how big the particles are and how they are arranged,” Sacci said.

After exploring the lithiated-graphite anode material, Sacci and his fellow energy researchers now understand the chemical process by which the thin protective layer generates on the anode.

“We were able to definitely say, yes a polymer formed, the particles appeared bigger—which means a layer grew on them—and they were more interconnected,” said Sacci.

“The advantage of forming this polymeric solid-electrolyte interface prior to battery assembly is that the battery would last longer, and that it’s a good stepping stone to giving us clues into how to design these artificial interfaces.”

This research was supported as part of the Fluid Interface Reactions, Structures and Transport (FIRST) Center, an Energy Frontier Research Center funded by the U.S. Department of Energy Office of Science. Work was performed at the Spallation Neutron Source and the High Flux Isotope Reactor, DOE Office of Science User Facilities at ORNL.

UT-Battelle manages ORNL for DOE’s Office of Science, the single largest supporter of basic research in the physical sciences in the United States, and is working to address some of the most pressing challenges of our time. For more information, please visit http://science.energy.gov/.—by Ashanti B. Washington