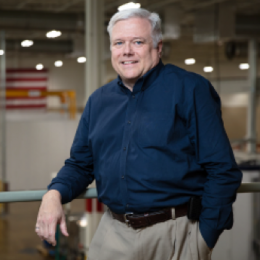 Scott Smith, Oak Ridge National Laboratory's intelligent machine tools group leader, was recognized by ASME and SME for his research in improving the production of highly engineered components in the automotive and aerospace sectors.

Newswise — Scott Smith, group leader for intelligent machine tools at Oak Ridge National Laboratory, is the 35th recipient of the M. Eugene Merchant Manufacturing Medal presented jointly by ASME (the American Society of Mechanical Engineers) and SME (the Society of Manufacturing Engineers). The Merchant Medal was established in 1986 to honor an exceptional individual who has had significant influence and responsibility for improving the productivity and efficiency of manufacturing operations.

Smith received the honor for providing fundamental and translational research contributions that have improved the production of highly engineered components in the automotive and aerospace sectors.

Prior to joining ORNL in 2019, Smith was professor and chair of mechanical engineering at the University of North Carolina at Charlotte. In 2012, he served as the assistant director for technology at the U.S. Advanced Manufacturing National Program Office in Washington, D.C. His research focuses on high-speed machining, process optimization, and machine dynamics. Smith holds 11 patents, has authored more than 100 technical papers, and co-authored two books.

“It is an honor to receive this recognition from ASME/SME ,” Smith said. “ASME and SME both provide critical professional support for manufacturing researchers, so it feels like this award represents the recognition of my peers and colleagues who are working with me to advance the manufacturing and machining of components vital to the transportation sector.”

Smith is a fellow of the International Academy for Production Engineering (CIRP), ASME, and SME. He served as the chair of the Manufacturing Engineering Division of ASME, and as president of the North American Manufacturing Research Institute of SME. Smith’s previous awards from ASME and SME include the William T. Ennor Manufacturing Technology Award, the Blackall Machine Tool and Gage Award, and the S.M. Wu Research Implementation Award. Smith received his doctorate in mechanical engineering from the University of Florida.