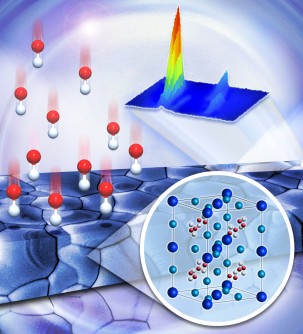 Newswise — OAK RIDGE, Tenn., April 6, 2016 -- Researchers at the Department of Energy’s Oak Ridge National Laboratory have found a potential path to further improve solar cell efficiency by understanding the competition among halogen atoms during the synthesis of sunlight-absorbing crystals.

Perovskite-based solar cells, however, have been hindered by unreliable durability, poor efficiency and unresolved questions.

“Organometallic halide perovskite semiconductors have high carrying capacity and efficiency to rival silicon-based solar cells. These materials are easy and cheap to grow but have been known to degrade,” said Bin Yang, an ORNL postdoctoral researcher at the Center for Nanophase Materials Science.

A new study published in the Journal of the American Chemical Society demonstrates that in the presence of reactive iodide ions, negatively charged bromine and chlorine are left out of the final perovskite crystal structure – like not making the team in gym class. “To take that first step and maximize solar cell technology made with organometallic halide perovskites, we need to know how to grow high quality light-absorbing material and establish optimal film growth processes,” said Yang, the study’s lead author. “The simple printing or spraying of perovskite ink makes solar module costs even lower.”

Halogen ions, jockeying for a position in the growing structure, affect the movement of charges through the crystals and subsequently impact the efficiency of sunlight’s conversion to electricity.

ORNL researchers then extracted chemical, molecular and elemental data from the perovskites using time-of-flight secondary ion mass spectrometry for ex-situ analysis. The mass spectrometer's beams of ions provided a snapshot of information about molecular activity on the crystal’s surface and established chlorine’s eventual distribution in the grain boundaries, or crevices, of perovskite films.

A combination of imaging techniques allowed the ORNL team to track the outcome of the halogen competition in the solar material.

Researchers discovered that while bromine, chlorine and iodine ions facilitate growth in a developing organometallic perovskite structure, only iodine gets a spot in the final crystal. However, though they are left out of the final structure, the molecules build “team morale” as they help promote overall crystal growth.

The measurements offered several insights into perovskite crystallization kinetics that will lead to improvements in the synthesis and processing of the materials for high efficiency solar cells, according to Xiao.

UT-Battelle manages ORNL for the DOE's Office of Science. The Office of Science is the single largest supporter of basic research in the physical sciences in the United States, and is working to address some of the most pressing challenges of our time. For more information, please visit http://wwww.science.energy.gov. -- by Ashanti B. Washington