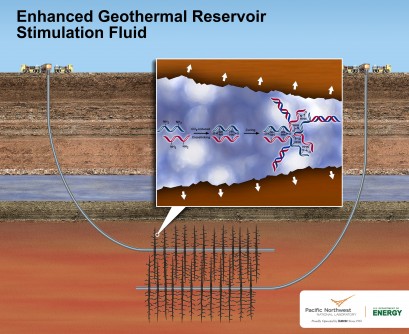 Newswise — RICHLAND, Wash. – More American homes could be powered by the earth’s natural underground heat with a new, nontoxic and potentially recyclable liquid that is expected to use half as much water as other fluids used to tap into otherwise unreachable geothermal hot spots.

The new reservoir stimulation fluid features an environmentally friendly polymer that greatly expands the fluid’s volume, which creates tiny cracks in deep underground rocks to improve power production. This fluid could also substantially reduce the water footprint and cost of enhanced geothermal systems. A paper describing the fluid has been published by the Royal Society of Chemistry in an advance online version of the journal Green Chemistry.

Creating enhanced geothermal systems requires injecting millions of gallons of water – a valuable resource in the arid American West, where enhanced geothermal has the most potential. That water is sometimes mixed with a very small amount of chemicals to help the fluid better create and spread tiny cracks underground, which ultimately extends the life of a geothermal power plant.

Some geothermal reservoir stimulation fluids are similar to oil and gas hydraulic fracturing fluids in that a small percentage of their volume can include proprietary chemicals, according to a 2009 paper in Geothermics and other sources. These chemicals can be toxic if ingested, leading geothermal developers to retrieve and treat used fluids. This protects aquifers, but increases the cost of power generation as well. Environmental reviews must be conducted to receive permits for enhanced geothermal injections.

A better solutionPNNL’s fluid is a solution of water and 1 percent polyallylamine, a chemical made of a long carbon chain with nitrogen attachments that’s similar to well-understood polymers used in medicine. The fluid is pumped into a well drilled at a geothermal hot spot. Soon after, workers also inject pressurized carbon dioxide, which could come from carbon captured at fossil fuel power plants.

Within 20 seconds, the polyallylamine and carbon dioxide link together to form a hydrogel that expands the fluid up to 2.5 times its original volume. The swelling gel pushes against the rocks, causing existing cracks to expand while also creating new ones. The expansion is expected to cut in half the amount of water and time needed to open up an enhanced geothermal reservoir, which shrinks the cost of power generation.

Passing the testTo test the fluid’s performance, geophysicist and co-author Alain Bonneville led the development of an experimental set up. Five cylindrical samples of rocks, about the size of C batteries, taken near a working enhanced geothermal power plant in California, were placed inside a high-pressure, high-temperature test cell created by the PNNL team. Small amounts of the fluid and liquid carbon dioxide were injected into the test cell. Pressure and temperature were gradually adjusted to match the conditions of underground geothermal reservoirs.

The researchers found their fluid consistently created small, but effective cracks in rock samples. Some of the new fractures were too small to be seen with a high-resolution imaging method called X-ray microtomography. But when they watched fluids such as water or carbon dioxide being injected, the team saw liquids moving through the previously impermeable rock samples. Moving liquids did not pass through rock samples that were injected with plain water or the common hydraulic fracturing chemicals sodium dodecyl sulfate and xanthan gum. The team reasoned larger-scale tests might produce bigger cracks.

Reduce, reuse & recycleTwo other benefits are the fluid’s potential to be recycled and cut costs. The fluid could be recycled by reducing or stopping the fluids that are pumped underground, or by injecting an acid. Modeling shows either would cause the hydrogel to disassemble into its original components: the water-polyallylamine solution and carbon dioxide. A pump would move the separated fluids to the surface, where they would be retrieved and used again. The fluid’s recyclability hasn’t been tested in the lab yet, however.

The operational cost of enhanced geothermal systems could also be reduced with the new fluid. With less liquid to pump underground, there will be less water to purchase, capture and treat, which lowers project costs. However, a detailed analysis is needed to precisely quantify by how much the fluid could lower enhanced geothermal’s price tag.

Additional studies are needed to further evaluate the fluid’s performance for enhanced geothermal systems. Fernandez and his team are planning lab studies to examine the fluid’s recyclability and its ability to fracture larger pieces of rock. Their ultimate goal is to conduct a controlled field test.

The team also recently started a PNNL-funded study to examine a similar fluid for unconventional oil and gas recovery. The oil and gas extraction fluid being considered would use a different polyamine that is related to the chemical used in the geothermal extraction fluid. Both fluids are stable and can withstand extreme temperatures, pressures and acidity levels. Many of the fluids used for oil and gas recovery degrade, making them less effective over time. That characteristic, combined with the fluid’s decreased water use, its nontoxic nature and its potential to be recycled, makes the PNNL fluid a candidate for oil and gas extraction.