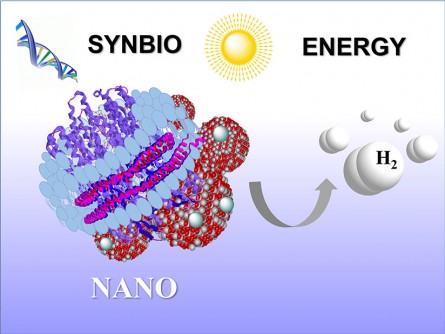 An entirely human-made architecture that converts light into fuel was built at the Center for Nanoscale Materials. This architecture combines tiny, nano-sized and artificial biological structures. It uses water and sunlight to pump out hydrogen without need of high heat or pressure.

Plants and other natural systems use energy to move protons across a cell membrane. The motion turns light energy into a cellular “fuel.” The elegance of this process inspires scientists to mimic it for new human-made materials and processes. A human-made “proton pump” was built. It was then integrated with a tiny embedded titanium and platinum catalyst. The two parts work together to produce hydrogen under illumination. This structure could have practical uses in energy storage, catalysis, and artificial life systems.

At Argonne National Laboratory’s Center for Nanoscale Materials, a U.S. Department of Energy user facility, researchers employed artificial nanodisc membrane technology to develop a structure for converting light into hydrogen. The small nanodisc membranes assist the study of proteins structure. In this case, the researchers sought to mimic nature’s proton pump machinery. The resulting proton pump was synthetically engineered cell-free, using nanodiscs as a membrane template to facilitate non-biological protein synthesis. The team then integrated the nanodisc-protein structure with nanoclusters of a titanium oxide semiconductor and tiny dots of platinum co-catalyst (TiO2/Pt). In this form, titanium oxide is a strong conductor for chemical reactions involving light. Once this bioarchitecture was developed, a near constant transformation of light into hydrogen ensued for at least 2 to 3 hours. This research could have practical applications in energy storage, catalysis, and artificial life systems.

This work was performed at the Center for Nanoscale Materials, a U.S. Department of Energy Office of Science user facility. P. Wang acknowledges partial support from the National Basic Research Program of China and the Recruitment Program of Global Experts. V. Chupin acknowledges support from the Ministry of Education and Science of the Russian Federation.