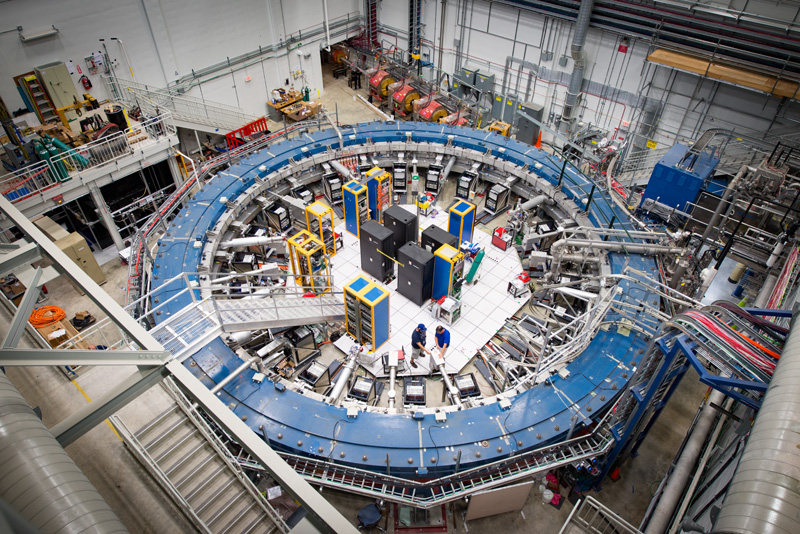 Today's publication by the Muon g-2 Theory Initiative marks the first time the global theoretical physics community has come together to publish a consensus value for the muon's magnetic moment. Now the world awaits the result from Fermilab's current Muon g-2 experiment, whose magnetic storage ring is pictured here. 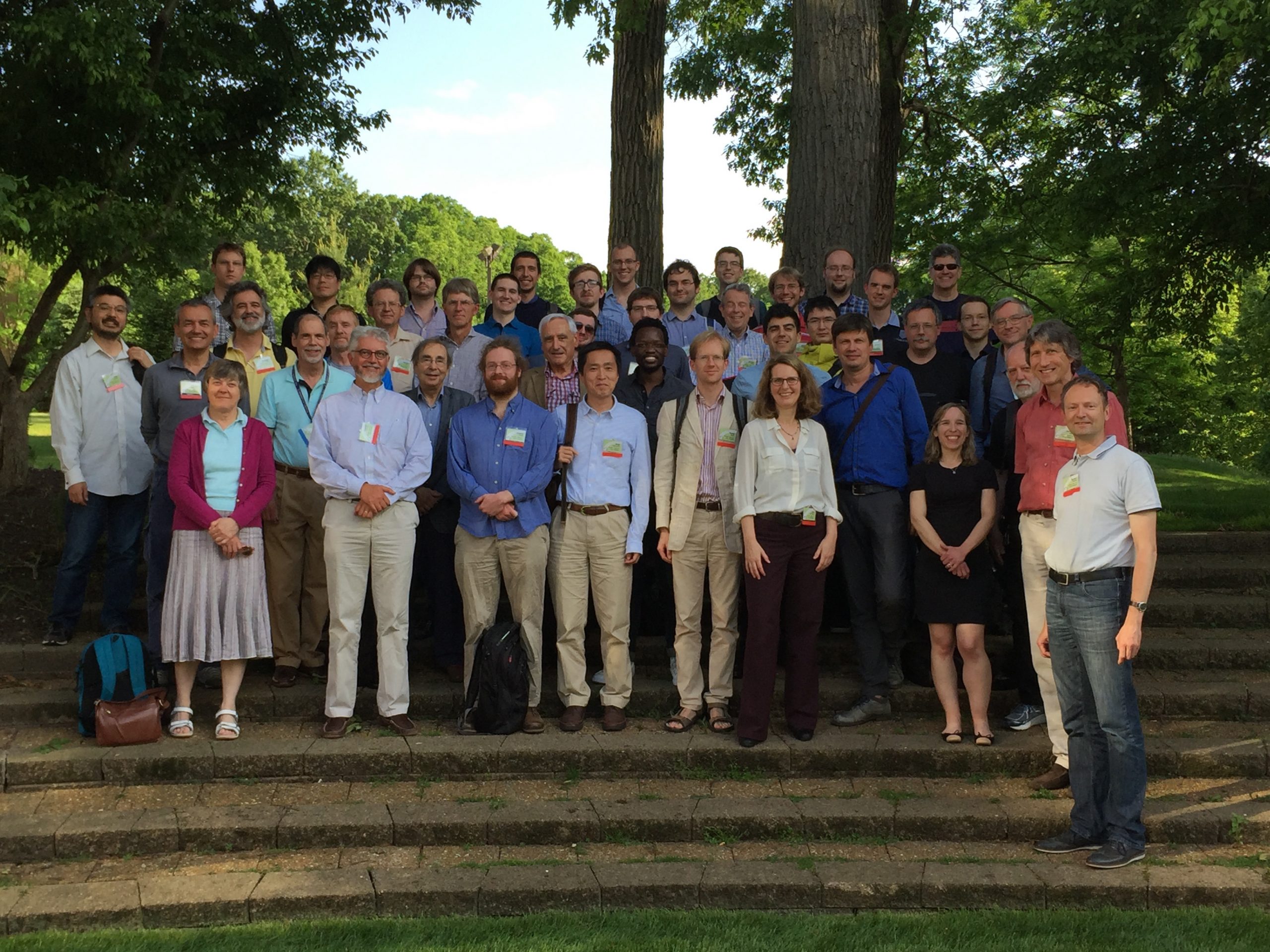 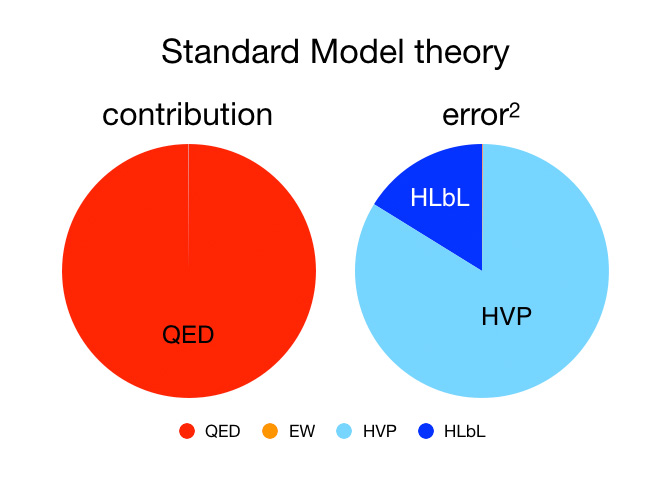 Standard Model theory: The chart on the left shows the contributions to the value of the anomalous magnetic moment from the Standard Model of particles and interactions. About 99.994% comes from contributions due to the electromagnetic force while the hadronic contributions account for only 0.006% (note the blue sliver). The right chart shows the contributions to the total uncertainty in the theoretical prediction. About 99.95% of the total error in the theoretical prediction is due the uncertainties in the hadronic corrections, while, at about 0.05% of the total error, the uncertainties in the electromagnetic and electroweak contributions are negligibly small. (QED – quantum electrodynamic forces; EW – electroweak forces; HVP – hadronic vacuum polarization; HLbL – hadronic light-by-light).

Newswise — For decades, scientists studying the muon have been puzzled by a strange pattern in the way muons rotate in magnetic fields, one that left physicists wondering if it can be explained by the Standard Model — the best tool physicists have to understand the universe.

This week, an international team of more than 170 physicists published the most reliable prediction so far for the theoretical value of the muon’s anomalous magnetic moment, which would account for its particular rotation, or precession. The magnetic moment of subatomic particles is generally expressed in terms of the dimensionless Landé factor, called g. While a number of international groups have worked separately on the calculation, this publication marks the first time the global theoretical physics community has come together to publish a consensus value for the muon's magnetic moment.

The result differs from the most recent experimental measurement, which was performed at Brookhaven National Laboratory in 2004, but not significantly enough to unambiguously answer this question.

Now the world awaits the result from Fermilab's current Muon g-2 experiment. In the upcoming months, physicists working on the experiment will unveil their preliminary measurement for the value. Depending on how much the Standard Model theoretical calculation differs from the upcoming experimental measurement, physicists may be one step closer to determining whether the muon’s magnetic interactions are hinting at particles or forces that have yet to be discovered.

In the late 1960s at CERN laboratory, scientists began using a large circular magnetic ring to test the theory that described how muons should "wobble" when moving through a magnetic field. Since then, experimenters have continued to quantify that wobble, making more and more precise measurements of the muon's anomalous magnetic moment.

The decades-long effort eventually led to an experiment at Brookhaven National Laboratory and its successor at Fermilab, as well as plans for a new experiment in Japan. At the same time, theorists worked to improve the precision of their calculations and fine-tune their predictions.

The theoretical value of the anomalous magnetic moment of the muon, published today, is:

The most precise experimental result available so far is:

Again, the slight discrepancy between the experimental measurements and the predicted value has persisted, and again it is just beneath the threshold to make a definitive statement.

This theoretical value, published in the arXiv, is the result of over three years of work by 130 physicists from 78 institutions in 21 countries.

“We’ve not had a theory effort like this before in which all the different evaluations are combined into a single Standard Model prediction,” said Aida El-Khadra, a physicist at the University of Illinois and co-chair of the Steering Committee for the Muon g-2 Theory Initiative, the name of the group of scientists who worked on the calculation.

Their work builds on a single equation published in 1928 that simultaneously started the field of quantum electrodynamics and laid the foundations for the Muon g-2 experiment.

If you were to ask physicists what they considered the most accurate and successful equation in their field, chances are more than a few would say it’s Dirac’s equation, which describes the relativistic quantum theory of the electron. Published in 1928, Dirac described the spin motion of electrons, and his equation bridged the gap between Einstein’s theory of relativity and the theory of quantum mechanics, and unintentionally predicted the existence of antimatter with only a single equation.

Dirac was also able to calculate something called the magnetic moment of the electron, which he described as being “an unexpected bonus.”

Electrons can be thought of as tiny spinning tops that rotate on their axis, an intrinsic property that makes each electron act like a tiny magnet. When placed in a magnetic field, such as the ones generated in particle accelerators, electrons will precess — or wobble on their axis — in a specific and predictable pattern. This wobble is an effect of the particle's magnetic moment, and it applies to more than electrons. Every electrically charged particle with ½ spin (spin is quantified in half units) behaves in the same way, including particles called muons, which have the same properties as electrons but are more than 200 times as massive.

Dirac's equation, which did not take into account the effects of quantum fluctuations, predicted that g would equal 2. Experiment has shown that the actual value differs from that simple expectation — hence the name "muon g-2."

Physicists now have a much better understanding of what those quantum fluctuations are and how they behave at subatomic scales, but precisely calculating how they affect the muon’s path is no easy task.

“Calculating the effects of these quantum fluctuations at the precision level demanded by modern experiment isn’t something that one brilliant person can do alone,” El-Khadra said. “It really takes the whole village.”

Meeting of the minds

With so many physicists working on the latest developments to the theory around the world, El-Khadra and her colleagues at Fermilab knew the best way to facilitate interactions between the groups was to bring them all together. So, starting in 2016, El-Khadra and her colleagues in the Fermilab Theory Group, together with Brookhaven National Laboratory scientist Christoph Lehner, Theory Initiative co-chair, and several other international collaborators reached out to the leaders in the global community of physicists working on this problem to put together a new initiative, the Muon g-2 Theory Initiative. The initiative, led by a nine-person Steering Committee that includes leaders of all the major efforts in both theory and experiment, organized a series of workshops around the world, including in the U.S., Japan and Germany, the first of which was hosted at Fermilab in 2017.

“We had some very intense discussions,” El-Khadra said, “That led to more detailed comparisons and a better understanding of the pros and cons of the various approaches.”

The establishment of the Muon g-2 Theory Initiative was the first coherent international effort to bring together all of the parties working on the Standard Model value of the muon's anomalous magnetic moment.

“Before this initiative began, there were a number of evaluations in the literature of the Standard Model value, each of which differed slightly from the others," said Boston University scientist Lee Roberts, co-founder of the Fermilab experiment and a member of the initiative’s Steering Committee. “The remarkable thing is that this worldwide community was able to come together and to agree on the ‘best’ value for each of the contributions to the value of the muon's magnetic moment.”

“Muons and other spin-½ particles are never really alone in the universe,” said Fermilab scientist Chris Polly, who is one of Muon g-2's spokespersons, along with University of Manchester physicist Mark Lancaster. “They interact with a whole entourage of particles that are constantly popping into and out of existence.”

The two main sources of uncertainty are hadronic vacuum polarization and light-by-light scattering — in which a muon emits and reabsorbs photons after they have traveled through a bubble of quarks and gluons. Both of these factors combine to make up less than 0.01% of the effect on the muon’s wobble yet make up the main source of uncertainty in the theory calculation.

Calculating the light-by-light scattering part of the hadronic contribution has proven to be especially difficult, and before the start of the Muon g-2 Theory Initiative, physicists had not yet produced reliable estimates of its effects. The best they could manage were rough approximations that led some to wonder whether these evaluations of the light-by-light scattering might be the source of the difference between the muon’s calculated anomalous magnetic moment and the experimentally measured value.

But theorists are now confident that they can lay these doubts to rest. Thanks to heroic efforts in recent years within the theory community, not just one, but two independent evaluations are now available, each with reliably estimated uncertainties, which are included in the total error of the Standard Model prediction listed above.

“We’ve now quantified the light-by-light scattering contribution to the extent that it can no longer be used as an explanation to save the Standard Model if the experimental value turns out to differ significantly from the theoretical prediction,” said Brookhaven National Laboratory physicist Christoph Lehner, Theory Initiative co-chair.

And with so much riding on the line, El-Khadra and other members of the Theory Initiative have left nothing to chance.

“We have strongly emphasized the importance of including evaluations based on several different methods in our construction of the Standard Model prediction of the anomalous magnetic moment of the muon,” El-Khadra said. “Because if we find that the Fermilab experiment's measurement is inconsistent with the Standard Model, we want to be sure.”

The Fermilab Muon g-2 experiment is supported by the DOE Office of Science.

Caption: Today's publication by the Muon g-2 Theory Initiative marks the first time the global theoretical physics community has come together to publish a consensus value for the muon's magnetic moment. Now the world awaits the result from Fermilab's current Muon g-2 experiment, whose magnetic storage ring is pictured here.

Caption: Standard Model theory: The chart on the left shows the contributions to the value of the anomalous magnetic moment from the Standard Model of particles and interactions. About 99.994% comes from contributions due to the electromagnetic force while the hadronic contributions account for only 0.006% (note the blue sliver). The right chart shows the contributions to the total uncertainty in the theoretical prediction. About 99.95% of the total error in the theoretical prediction is due the uncertainties in the hadronic corrections, while, at about 0.05% of the total error, the uncertainties in the electromagnetic and electroweak contributions are negligibly small. (QED – quantum electrodynamic forces; EW – electroweak forces; HVP – hadronic vacuum polarization; HLbL – hadronic light-by-light).