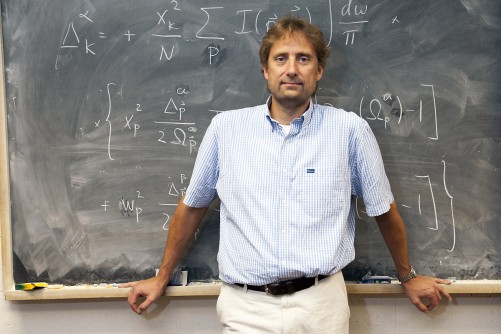 UIC physicist Dirk Morr, who worked with researchers at Brookhaven National Laboratory, says the findings were the result of "the close collaboration of theory and experiment."

Newswise — Physicists have identified the "quantum glue" that underlies a promising type of superconductivity -- a crucial step towards the creation of energy superhighways that conduct electricity without current loss.

The research, published online in the Proceedings of the National Academy of Sciences, is a collaboration between theoretical physicists led by Dirk Morr, professor of physics at the University of Illinois at Chicago, and experimentalists led by Seamus J.C. Davis of Cornell University and Brookhaven National Laboratory.

The earliest superconducting materials required operating temperatures near absolute zero, or −459.67 degrees Fahrenheit. Newer unconventional or "high-temperature" superconductors function at slightly elevated temperatures and seemed to work differently from the first materials. Scientists hoped this difference hinted at the possibility of superconductors that could work at room temperature and be used to create energy superhighways.

Superconductivity arises when two electrons in a material become bound together, forming what is called a Cooper pair. Groundbreaking experiments performed by Freek Massee and Milan Allan in Davis's group were analyzed using a new theoretical framework developed at UIC by Morr and graduate student John Van Dyke, who is first author on the report. Their results pointed to magnetism as the force underlying the superconductivity in an unconventional superconductor consisting of cerium, cobalt and indium, with the molecular formula CeCoIn5.

"For a long time, we were unable to develop a detailed theoretical understanding of this unconventional superconductor," said Morr, who is principal investigator on the study. Two crucial insights into the complex electronic structure of CeCoIn5 were missing, he said: the relation between the momentum and energy of electrons moving through the material, and the 'quantum glue' that binds the electrons into a Cooper pair.

Those questions were answered after the Davis group developed high-precision measurements of CeCoIn5 using a scanning tunneling spectroscopy technique called quasi-particle interference spectroscopy. Analysis of the spectra using a novel theoretical framework developed by Morr and Van Dyke allowed the researchers to extract the missing pieces of the puzzle.

The new insight allowed them to explore the 30-year-old hypothesis that the quantum glue of superconductivity is the magnetic force.

“Knowing the directional dependence of the quantum glue, we were able, for the first time, to quantitatively predict the material’s superconducting properties using a series of mathematical equations," he said.

“Our calculations showed that the gap possesses what's called a d-wave symmetry, implying that for certain directions the electrons were bound together very strongly, while they were not bound at all for other directions,” Morr said. Directional dependence is one of the hallmarks of unconventional superconductors.

“We concluded that magnetism is the quantum glue underlying the emergence of unconventional superconductivity in CeCoIn5.”

The finding has "lifted the fog of complexity" surrounding the material, Morr said, and was only made possible by "the close collaboration of theory and experiment, which is so crucial in advancing our understanding of complex systems."

"We now have an excellent starting point to explore how superconductivity works in other complex material," Morr said. “With a working theory, we can now investigate how we have to tweak the system to raise the critical temperature -- ideally, all the way up to room temperature."

In addition to those mentioned above, Cedomir Petrovic of Brookhaven National Laboratory is a co-author on the study.