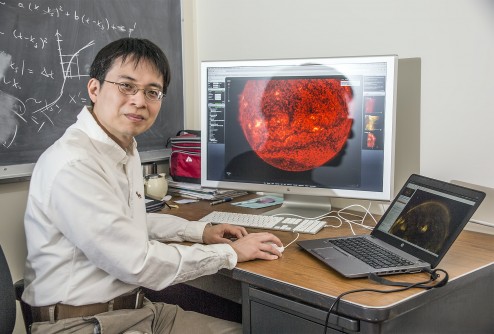 Newswise — Scientists at the U.S. Department of Energy’s (DOE) Princeton Plasma Physics Laboratory (PPPL) have discovered key conditions that give rise to fast magnetic reconnection, the process that triggers solar flares, auroras, and geomagnetic storms that can disrupt signal transmissions and other electrical activities, including cell phone service. The process occurs when the magnetic field lines in plasma, the hot, charged state of matter composed of free electrons and atomic nuclei, break apart and violently reconnect, releasing vast amounts of energy. This happens in thin sheets of plasma, called current sheets, in which electric current is strongly concentrated.

By incorporating computer simulations, the findings add to an earlier theory of fast reconnection developed mathematically by physicists at PPPL and Princeton University. The new results incorporate a new predictive model that gives a more complete description of the physics involved.

The impact of reconnection can be felt throughout the universe. The process may cause enormous bursts of gamma-ray radiation thought to be associated with supernova explosions and the formation of ultra-dense neutron stars and black holes. “A gamma-ray burst in our Milky Way galaxy, if pointing towards Earth, could potentially cause a mass extinction event,” said PPPL physicist Yi-Min Huang, lead author of a paper reporting the findings in Astrophysical Journal. “Clearly, it is important to know when, how, and why magnetic reconnection takes place.”

Scientists have observed that reconnection happens suddenly, after a long period of quiescent behavior by magnetic fields inside current sheets. What exactly causes the magnetic fields to separate and reconnect, and why does the reconnection take place more quickly than theory says it should?

Using computer simulations and theoretical analysis, the physicists demonstrated that a phenomenon called the “plasmoid instability” creates bubbles within plasma that can lead to reconnection when certain conditions are met:

The trigger breaks up two-dimensional sheets of electric current within plasma into bubbles, or plasmoids, and many smaller sheets. The growing number of sheets creates more opportunity for magnetic lines to break apart and join together. Reconnection also occurs in more than one place, causing the aggregate rate for an entire system to increase.

The smaller size of current sheets speeds up reconnection as well. Electromagnetic forces tend to propel the plasma between sheets, producing motion that accelerates when the sheets break into smaller ones. The accelerating plasma brings magnetic lines together more quickly and leads to faster reconnection rates.

Huang and fellow physicists would like to test their new model using experimental machines with additional capability. While no such machine exists at present, researchers look forward to a new unit that is coming online.

Funding for this research was provided by the National Science Foundation and the DOE (Fusion Energy Sciences). The simulations were performed by supercomputers at the Oak Ridge Leadership Computing Facility and the National Energy Research Scientific Computing Center, a DOE Office of Science User Facility at Lawrence Berkeley National Laboratory in Berkeley, California. Coauthors include Amitava Bhattacharjee, head of the Theory Department at PPPL, and Luca Comisso, a former PPPL and Princeton University physicist now at Columbia University.