For the nervous system to function properly, a neurotransmitter acteylcholine (cyan ovals) is broken into two parts - acetic acid (green half) and choline (blue half) - inside a deep gorge of the enzyme human acetylcholinesterase. When organophosphorus poison (red pellet shape) is attached in the gorge blocking the enzyme catalytic site, the neurotransmitter molecules remain intact, resulting in overstimulation of the nervous system. An antidote (yellow wiggly shape) should effectively reach the site of the poison attachment within the acetylcholiesterase gorge, chemically react with it and then quickly leave so that the enzyme function is restored. 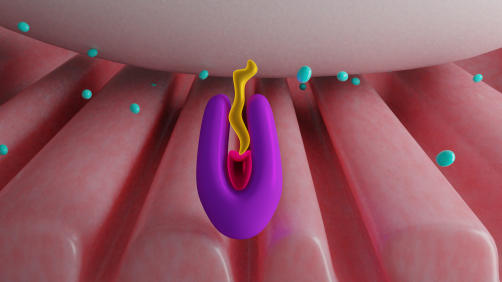 A fast-acting antidote to mitigate the effects of organophosphate poisoning requires a reactivator that can effectively and efficiently cross the blood-brain barrier, bind loosely to the enzyme, chemically snatch the poison and then leave quickly. Oak Ridge National Laboratory is using neutron diffraction data towards improving a novel reactivator design.

Newswise — Pick your poison. It can be deadly for good reasons such as protecting crops from harmful insects or fighting parasite infection as medicine—or for evil as a weapon for bioterrorism. Or, in extremely diluted amounts, it can be used to enhance beauty.

While targeted chemical attacks on civilians tend to make headlines, the most common poisoning reports in the United States are from accidental exposure to household chemicals such as insect sprays, cleaning solutions or improperly washed fruit or vegetables. In any case, the remedy is a fast-acting, poison-chasing drug compound, and Oak Ridge National Laboratory is on the forefront developing a new generation of life-saving antidotes.

Simply put, “a poison is something that acutely degrades your health, or your health state,” said Andrey Kovalevsky, a crystallographer and biochemist at ORNL. He is an expert in atomic-level understanding of enzyme function, drug binding and drug resistance. Using neutrons and X-rays, he studies how enzymes work in the body and, depending on the specifics, how to inhibit or reactivate them using small organic molecules.

“Depending on the poison and amount, the effect can be very quick—within seconds—or it can be slow,” he added. The body triggers its own defenses to counteract a poisonous substance; however, it’s usually not enough. Any level of exposure could be deadly, especially if the type of poison is not immediately known to a first responder or medical team attending to an affected patient.

An antidote must act fast—before the poison does irreversible damage—to be effective and save lives.

Kovalevsky is part of a team led by Zoran Radić of the University of California, San Diego, developing a new family of antidotes for poisons called organophosphates, which include nerve agents. Radić’s research uniquely targets the root cause of organophosphate poisoning, going beyond just treating the symptoms as with existing remedies.

Their focus is on the complex biochemical mechanisms that control and maintain the body’s nervous system. They start with acetylcholine, or ACh, which is a compound found at the junction of muscles and nerves and also in the brain. ACh functions as a neurotransmitter that maintains normal communication between nerves and muscles. But ACh doesn’t act alone.

The enzyme called acetylcholinesterase, or AChE, is also where muscles and nerves meet. Its job is to provide specific control of the levels of ACh compound by degrading it, which ensures the nerves are functioning properly.

When a person is exposed to a nerve agent, or to copious amounts of an insect spray, for instance, the poison passes quickly from the lungs or skin into the blood stream and races to the nervous system. As it reaches the muscle-nerve junctions, the poison overwhelms and inhibits the work of the AChE enzyme.

As the AChE enzyme is under attack and unable to degrade ACh, the levels of the ACh compound rise, disrupting the balance between muscles and nerves. This wreaks havoc on the body.

“Instead of being too little of something, there’s too much of this neurotransmitter. So, the nerves’ receptors are overexcited, and people can go into shock, have tremors and seizures and start sweating because their glands are working too much,” Kovalevsky explained. In the end, the affected person will likely die because they stopped breathing.

Radić said the antidote must mirror the poison’s activity without acting as an inhibitor, too.

“These poisons, typically comprised of uncharged or neutral molecules, traverse biological membranes very quickly into the blood and are then distributed from blood to tissue, including the central nervous system. And all of this happens in minutes after exposure,” he said.

“The poison gets to its target quickly, so to treat that target and recover the activity of the enzyme, we have to have an antidote that does the same.”

If done right, the antidote will relieve the AChE enzyme of the poison’s attack, essentially excising the poison’s molecule attached to the enzyme, and allowing it to begin leveling out the ACh neurotransmitters and ultimately calm down the entire nervous system. The trick is to ensure the antidote is designed not to overstay or get too attached to the enzyme—and become part of the problem.

In a study funded by the CounterACT Program, National Institutes of Health Office of the Director and the National Institute of Neurological Disorders and Stroke and published in the Journal of Biological Chemistry, Radić’s team designed and tested fast-acting drugs called reactivators on three different nerve agents and one pesticide with positive initial results.

The team started with an existing drug compound (code name RS194B), which was developed by Radić and UC San Diego professor Palmer Taylor about 15 years earlier, because it had already shown promise traveling through the blood-brain barrier when tested on primates exposed to organophosphate poisoning.

However, the newly designed reactivators performed better in vitro, or outside a living organism, than RS194B, and the research team figured out why.

At the atomic level, RS194B could not reach the site of the poison’s activity within the AChE molecule as efficiently as the new reactivators.

For this study, the team used X-ray crystallographic analysis to look at the RS194B complex with the AChE enzyme alone and then introduced an analog of a chemical nerve agent called VX—one of the deadliest chemicals ever made. While RS194B didn’t bind as expected, the experiment did foster ideas on how to redesign “a sort of elite compound,” Kovalevsky said.

“We need to improve the reactivator’s ability to cross the blood-brain barrier, bind loosely to the enzyme, chemically snatch the poison and then leave quickly,” Kovalevsky said. “We don’t want it to stay upon reactivation, as we do for many standard drugs that normally inhibit an enzyme function.”

“That’s our goal. That’s why designing reactivators is a completely different endeavor and many rules of conventional drug design do not apply,” he added.

After some tweaks to the drug design, the team came up with a new paradigm that can completely change how researchers think about a reactivator design. They ran computer simulations and later synthesized several most promising compounds of the altered design options, which provided details on their properties and clues on how each compound might work.

They analyzed the impact of each drug design variation, plus the original RS194B, with nerve agents Sarin, Cyclosarin, VX and a pesticide Paraoxon. Also, the team included 2PAM (also called Pralidoxime)—the only antidote for organophosphate poisoning that is approved by the U.S. Federal Drug Administration for use in adults and children—which served as a control for the experiments.

“We wanted our reactivator designs to be as good as, or better than, 2PAM in these studies,” said Kovalevsky. However, 2PAM is not able to cross the blood-brain barrier. It can travel to other poison-effected areas of the body to act on the peripheral nervous system, but it doesn’t reactivate in the central nervous system.

Based on the study’s initial results, several of the team’s drug design variations worked better than RS194B and 2PAM, which Kovalevsky said is a very encouraging result for their novel reactivator design ideas.

“One of distinctions of our antidote is that they can engage different organophosphate poisons more effectively, because their reactivation structures can change with their protonation,” Radić said. “Unlike X-rays, diffraction of neutrons is an experimental technique that can tell us about the position of protons in both the antidote and in the poisoned enzyme.”

To get a better picture of the novel reactivator design, the team used neutron crystallography at ORNL’s High Flux Isotope Reactor, a Department of Energy Office of Science user facility. Kovalevsky operates the instrument named IMAGINE, which uses neutron diffraction techniques to look at the structure of a single crystal at atomic scale.

The molecular structure of the protein is complex, which requires growing large single crystals—a strength of ORNL’s—for neutron diffraction. Neutrons are highly sensitive to light elements such as hydrogen, and they are particularly well suited to find individual hydrogen atoms in protein crystals that X-rays cannot detect. The data collected from IMAGINE, along with information from a neutron experiment performed at Institut Laue–Langevin in France, confirmed it’s possible to pinpoint the location and distribution of each hydrogen atom in the protein.

The team will continue growing larger crystals for analysis, which should produce higher resolution datasets and inform adjustments to the promising, novel drug designs. Their continued research could ultimately confirm a new class of fast-acting, life-saving antidotes for organophosphate poisoning.

UT-Battelle LLC manages ORNL for the DOE Office of Science. The single largest supporter of basic research in the physical sciences in the United States, the Office of Science is working to address some of the most pressing challenges of our time. For more information, please visit energy.gov/science.—by Sara Shoemaker