Poof! The Weird Case of the X-Ray That Came Out Blank 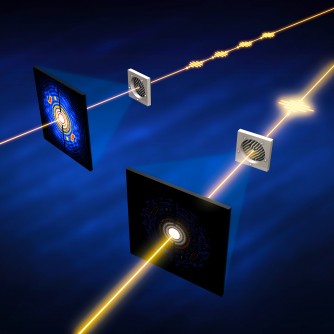 An illustration shows what happens in a typical experiment with SLAC’s LCLS X-ray laser, top, versus what happened in this study with an especially intense X-ray pulse. Normally the X-ray pulses -- which are shown coming in from the right -- scatter off electrons in a sample and produce a pattern in a detector. But when researchers cranked up the intensity of the X-ray pulses, the pulses seemed to go straight through the sample, as if it were not there, and the pattern in the detector vanished. Two recent papers describe and explain this surprising result, which is due to a ‘nonlinear’ effect where particles of X-ray light team up to cause unexpected things to happen.

Newswise — Imagine getting a medical X-ray that comes out blank – as if your bones had vanished. That’s what happened when scientists cranked up the intensity of the world’s first X-ray laser, at the Department of Energy’s SLAC National Accelerator Laboratory, to get a better look at a sample they were studying: The X-rays seemed to go right through it as if it were not there.

This result was so weird that the leader of the experiment, SLAC Professor Joachim Stöhr, devoted the next three years to developing a theory that explains why it happened. Now his team has published a paper in Physical Review Letters describing the 2012 experiment for the first time.

What they saw was a so-called nonlinear effect where more than one photon, or particle of X-ray light, enters a sample at the same time, and they team up to cause unexpected things to happen.

“In this case, the X-rays wiggled electrons in the sample and made them emit a new beam of X-rays that was identical to the one that went in,” said Stöhr, who is an investigator with the Stanford Institute for Materials and Energy Sciences at SLAC. “It continued along the same path and hit a detector. So from the outside, it looked like a single beam went straight through and the sample was completely transparent.”

This effect, called “stimulated scattering,” had never been seen in X-rays before. In fact, it took an extremely intense beam from SLAC’s Linac Coherent Light Source (LCLS), which is a billion times brighter than any X-ray source before it, to make this happen.

A Milestone in Understanding How Light Interacts with Matter

The observation is a milestone in the quest to understand how light interacts with matter, Stöhr said.

“What will we do with it? I think we’re just starting to learn. This is a new phenomenon and I don’t want to speculate,” he said. “But it opens the door to controlling the electrons that are closest to the core of atoms ­– boosting them into higher orbitals, and driving them back down in a very controlled manner, and doing this over and over again.”

Nonlinear optical effects are nothing new. They were discovered in the1960s with the invention of the laser – the first source of light so bright that it could send more than one photon into a sample at a time, triggering responses that seemed all out of proportion to the amount of light energy going in. Scientists use these effects to shift laser light to much higher energies and focus optical microscopes on much smaller objects than anyone had thought possible.

The 2009 opening of LCLS as a DOE Office of Science User Facility introduced another fundamentally new tool, the X-ray free-electron laser, and scientists have spent a lot of time since then figuring out exactly what it can do. For instance, a SLAC-led team recently published the first report of nonlinear effects produced by its brilliant pulses.

“The X-ray laser is really a quantum leap, the equivalent of going from a light bulb to an optical laser,” Stöhr said. “So it’s not just that you have more X-rays. The interaction of the X-rays with the sample is very different, and there are effects you could never see at other types of X-ray light sources.”

A Most Puzzling Result

Stöhr stumbled on this latest discovery by accident. Then director of LCLS, he was working with Andreas Scherz, a SLAC staff scientist, who is now with the soon-to-open European XFEL in Hamburg, Germany, and Stanford graduate student Benny Wu to look at the fine structure of a common magnetic material used in data storage.

To enhance the contrast of their image, they tuned the LCLS beam to a wavelength that would resonate with cobalt atoms in the sample and amplify the signal in their detector. The initial results looked great. So they turned up the intensity of the laser beam in the hope of making the images even sharper.

That’s when the speckled pattern they’d been seeing in their detector went blank, as if the sample had disappeared.

“We thought maybe we had missed the sample, so we checked the alignment and tried again,” Stöhr said. “But it kept happening. We knew this was strange – that there was something here that needed to be understood.”

Stöhr is an experimentalist, not a theorist, but he was determined to find answers. He and Scherz dove deeply into the scientific literature. Meanwhile Wu finished his PhD thesis, which described the experiment and its unexpected result, and went on to a job in industry. But the team held off on publishing their experimental results in a scientific journal until they could explain what happened.

“We are developing a whole new field of nonlinear X-ray science, and our study is just one building block in this field,” Stöhr said. “We are basically opening Pandora’s box, learning about all the different nonlinear effects, and eventually some of those will turn out to be more important than others.”

The study included other collaborators from SLAC and Stanford, and was funded by the DOE Office of Science.