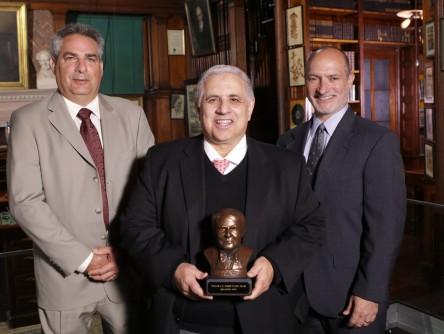 Photo courtesy of the R&D Council of New Jersey 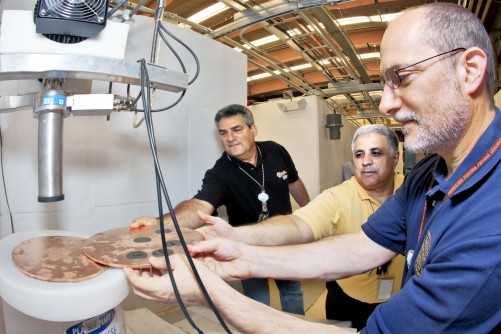 PPPL inventors, from left, George Ascione, Charles Gentile, and Adam Cohen in the lab where they invented a new way of producing a much needed radioisotope for medical imaging.

Newswise — A team of scientists at the U.S. Department of Energy’s (DOE) Princeton Plasma Physics Laboratory (PPPL) has won the 2016 Edison Patent Award for inventing an on-demand method to create a badly needed isotope used routinely in medical imaging devices to diagnose diseases such as cancer and heart disease.

Charles Gentile, head of the Tritium Systems Group at PPPL, will accept the award along with George Ascione, head of the Health Physics Division, and Adam Cohen, Deputy Undersecretary for Science and Energy at DOE, who was deputy director for operations at PPPL when he worked on the technology. The three will be honored by the Research & Development Council of New Jersey at a Nov. 3 ceremony at the Liberty Science Center in Hoboken, New Jersey.

“We’re gratified to receive this award,” Gentile said. “There was a lot of work that went into this and we’re just happy that we can potentially make a positive impact on helping people in the world who would not necessarily have access to this diagnostic technology.”

“This is an excellent example of how research can lead to unexpected results,” Ascione added. “Our experiments in fusion and plasma physics led us to a technology that could benefit millions of people around the world. There’s no greater honor than to receive recognition named for this country’s greatest inventor, Thomas Alva Edison.”

The invention could help fill a global need for the radioactive element Technetium 99-m (Tc-99m), the substance used in two-thirds of nuclear medical diagnostic procedures and part of a multi-billion-dollar radioisotope industry. The inventors received a patent this year. There have been shortages of the material in recent years due to unexpected maintenance shutdowns of nuclear reactors. The refrigerator-sized device can produce Tc-99m on-site in a hospital or doctor’s office, eliminating the need to transport it great distances. This could make the substance more available to third-world countries, Gentile said. And unlike the production of Tc-99m in nuclear reactors, there is no danger of nuclear proliferation associated with the device because it does not use uranium.

Doctors inject Tc-99m into patients during scans used to diagnose diseases in bones and organs throughout the body. The isotope emits gamma rays that scanning devices can easily trace. Since the substance has a half-life of six hours, the radiation exposure to patients is kept to a minimum. But the half-life also makes it difficult to ship to third-world countries that are more than six hours away from the reactors that produce the substance.

In addition to the Edison Award, Gentile also will receive an Innovator’s Award from the New Jersey Inventors Hall of Fame, cosponsored by the Stevens Institute of Technology. He will accept the award at the 2016 awards banquet on Thursday, Oct. 27, in Hoboken, New Jersey.

Joining Gentile will be PPPL physicist Manfred Bitter, who will receive an Innovator’s Award for his patented invention of a new type of X-ray crystal spectrometer using a new class of focusing crystal surfaces. The device uses intense beams of ultraviolet light called “extreme ultraviolet” or EUV. It could be used to improve spectroscopy (measuring and investigating spectra produced by light from electromagnetic radiation) and microscopy (microscopes). The device could lead to substantial advancements and cost savings in EUV lithography (printing integrated circuits), which is critical for manufacturing the next generation of integrated circuits.

PPPL’s Christopher Brunkhorst won the Innovator’s Award in 2015, along with David Geveke, a USDA scientist, and Andrew Bigley, a USDA engineering technician, for his invention of a novel technique for pasteurizing eggs by using radio frequency heating.

PPPL, on Princeton University's Forrestal Campus in Plainsboro, New Jersey, is devoted to creating new knowledge about the physics of plasmas — ultra-hot, charged gases — and to developing practical solutions for the creation of fusion energy. The Laboratory is managed by the University for the U.S. Department of Energy’s Office of Science, which is the largest single supporter of basic research in the physical sciences in the United States, and is working to address some of the most pressing challenges of our time. For more information, please visit science.energy.gov. 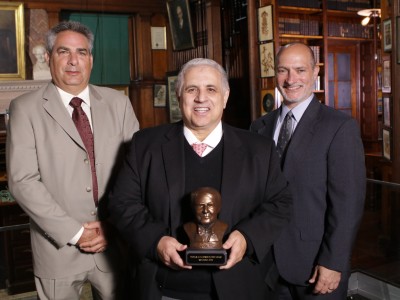 Credit: Photo courtesy of the R&D Council of New Jersey 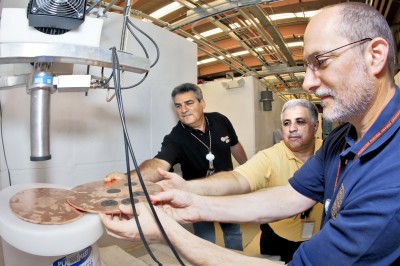 Caption: PPPL inventors, from left, George Ascione, Charles Gentile, and Adam Cohen in the lab where they invented a new way of producing a much needed radioisotope for medical imaging.