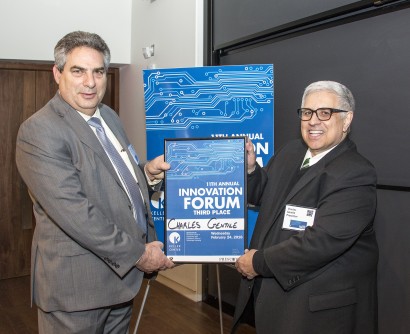 Charles Gentile, right, and co-inventor George Ascione, show off their award at the 11th Annual Innovation Forum at the Andlinger Center for Energy and the Environment on Feb. 24. 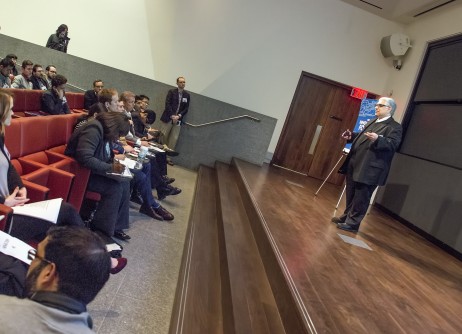 Charles Gentile presents to judges seated in the front row at the Innovation Forum. 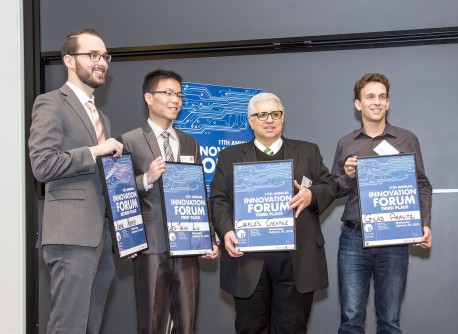 The invention could help solve a worldwide shortage of a radioactive element that is crucial in medical scanning devices used to diagnose diseases such as heart disease and breast cancer. And it does so without the use of uranium. The refrigerator-sized device can produce Technetium-99m (Tc-99m), the substance used in most medical diagnostic procedures, in a hospital or doctor’s office. This could make the substance more available to third-world countries, Gentile said. And unlike the production of Tc-99m in nuclear reactors, there is no danger of nuclear proliferation associated with the device because it does not use uranium.

The award gives Gentile, the head of the Tritium Systems Group at PPPL, and Ascione, the head of the Health Physics Division, $5,000 to develop their invention. The third inventor was Cohen, the Deputy Undersecretary for Science and Energy at the U.S. Department of Energy, who formerly was deputy director for operations at PPPL when he worked on the technology.

“I’m really happy,” Gentile said after receiving the award. “They know we’re onto something and we’re going to have a positive impact.”

Recently awarded a patentAscione said he and Gentile are looking forward to receiving a patent. The inventors recently learned through Princeton’s Office of Technology Licensing that the device has been received a patent and expect the patent to issue any day. “It’s a great thing,” Ascione added. “This is really a payoff for all the hard work we put in.”

Princeton University’s Keller Center, which hosted the event along with the Office of Technology Licensing, invited Gentile and six other inventors to present their inventions at The Innovation Forum, held at Princeton’s Andlinger Center for Energy and the Environment’s Maeder Hall, before a panel of judges made up of entrepreneurs and venture capitalists. The judges decided this year to award not one but two third-place prizes along with the first and second-place prizes. “The judges really fell in love with many of the inventions,” said Cornelia Huellstrunk, the executive director of the Keller Center.

Jen-Tang Lu, a Princeton University Ph.D. candidate in electrical engineering, won first place for his invention to enhance ultrasound imaging. Jake Herb, a chemistry Ph.D. candidate, won second place for his method of producing low-cost green electrolytes for magnesium-ion batteries. The other third place prize winner was Gilad Arwatz, a postdoctoral researcher in mechanical and aerospace engineering, for a nano-wire that provides a faster, cheaper and more compact device to measure temperature, velocity and humidity.

Gentile said his invention would help fill a need for Tc-99m, which is used in two-thirds of medical diagnostic procedures around the world and is part of a multi-billion dollar radioisotope industry. There is currently a worldwide shortage of the material due to nuclear reactors being shut down. A facility in Chalk River, Ontario, Canada, which is one of the main producers of the substance, is slated to shut down this year, Gentile said.

Doctors inject Tc-99 m to diagnose conditions ranging from brain tumors to heart disease. The isotope emits gamma rays that scanning devices can easily trace. Since the substance has a half-life of six hours, the radiation exposure to patients is kept to a minimum. But the half-life also makes it difficult to ship to third-world countries that are more than six hours away from the reactors that produce the substance. Gentile said he hopes that hospitals and medical centers in these areas would be able to use the device to produce Tc-99m themselves. Gentile told the judges that he could produce a prototype of the refrigerator-sized device within a year. “We would like to get this material to many places where people now can’t access it,” he said.

Laurie Bagley, head of Technology Transfer at PPPL, said she was happy to see the invention recognized. “The technology is potentially life changing for those who would now have access to this medical isotope,” she said. 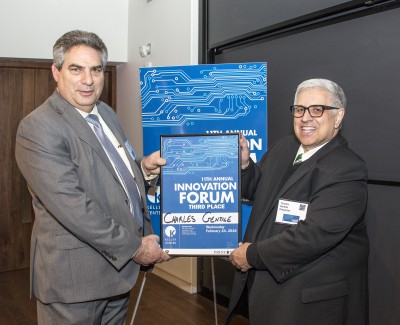 Caption: Charles Gentile, right, and co-inventor George Ascione, show off their award at the 11th Annual Innovation Forum at the Andlinger Center for Energy and the Environment on Feb. 24. 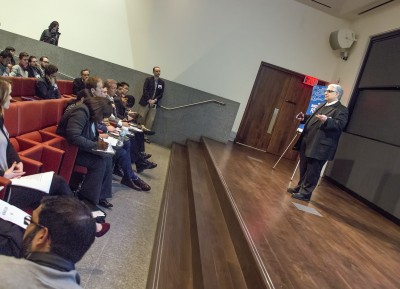 Caption: Charles Gentile presents to judges seated in the front row at the Innovation Forum. 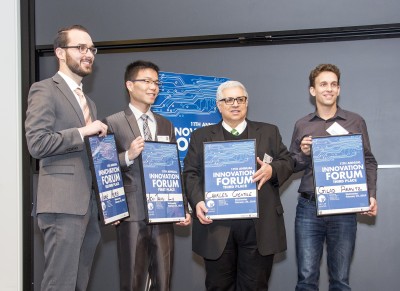