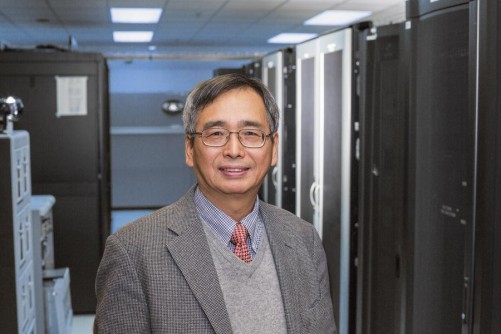 Newswise — A nationwide team of researchers led by physicist C.S. Chang of the U.S. Department of Energy’s (DOE) Princeton Plasma Physics Laboratory (PPPL) has won the use of 269.9 million supercomputer hours to complete an extreme-scale study of the complex edge region of fusion plasmas. The award was made by the DOE’s ASCR Leadership Computing Challenge (ALCC(link is external)) program for 2017, supported by DOE’s Office of Science.

The investigation, to be performed with the XGC code developed by PPPL and nationwide partners, will perform double-duty. It will model the width of the plasma flux that strikes and could damage the heat-exhausting divertors in donut-shaped magnetic fusion facilities called tokamaks, and will also simulate the crucial transport barrier — or “pedestal” —  that stands between the hot core of the plasma and the cooler edge.

The study will bear directly on ITER, the international experiment under construction in France to demonstrate the feasibility of fusion as an energy source. “ITER must be able to reliably withstand the steady exhaust heat that will be deposited in an extremely narrow strip on the divertor target plates,” Chang said in the investigation proposal.  The study will provide insight into control of this heat-deposition strip, he said, and will also “shed light on the structure of the ITER pedestal, which is another critical issue.”

Working with Chang on the project will be PPPL physicists Seung-Hoe Ku, Robert Hager, Stephane Ethier, Daren Stotler, Michael Churchill, and other members of the team. Collaborating with them will be researchers from Oak Ridge National Laboratory, Lawrence Berkeley National Laboratory, the University of Colorado Denver, Rensselaer Polytechnic Institute, NERSC, and the firm PHworley Consulting.