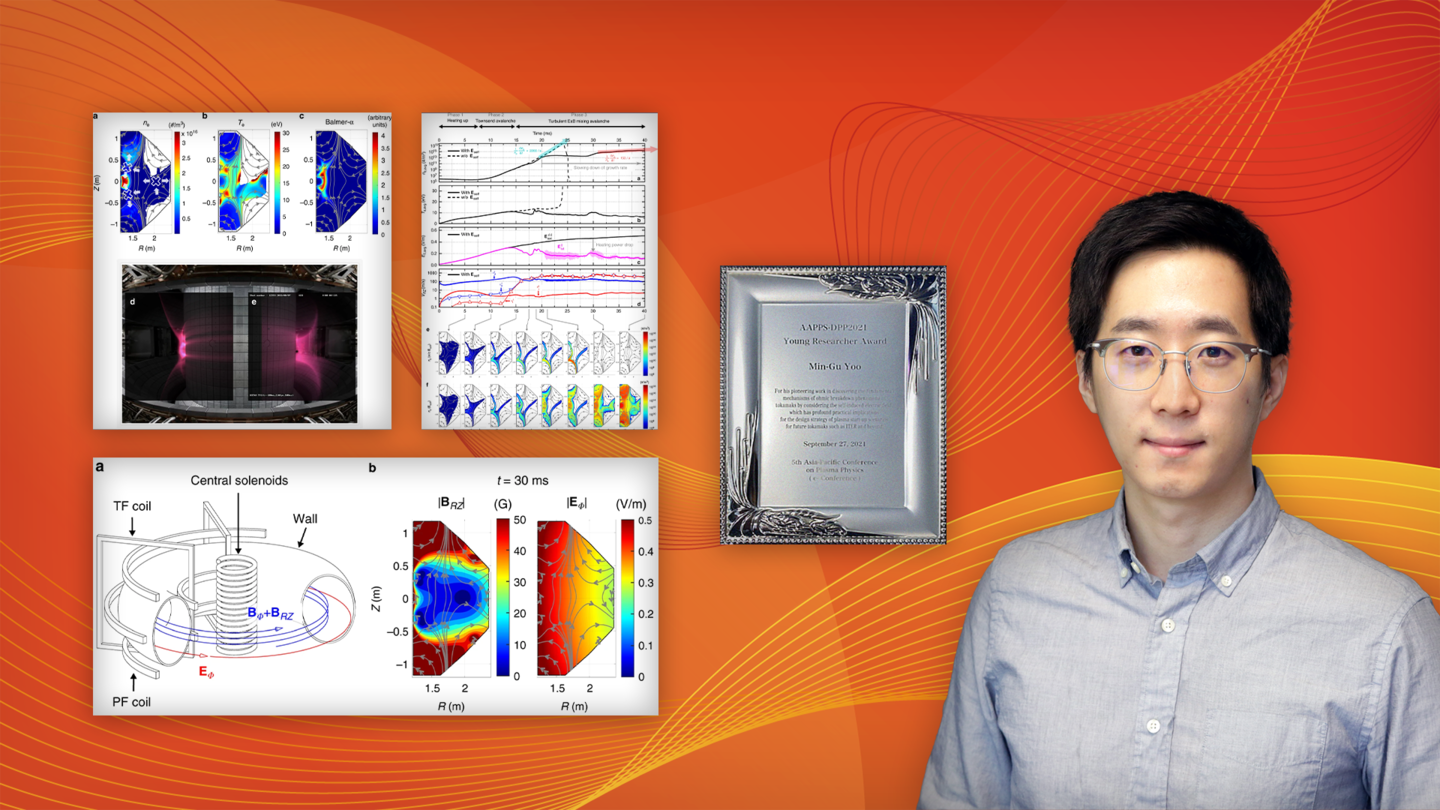 Newswise — Min-Gu Yoo, a postdoctoral physicist in the Theory Department at the U.S. Department of Energy’s (DOE) Princeton Plasma Physics Laboratory (PPPL), has won an Under 40 Young Researcher Award from the Association of Asia-Pacific Physical Societies-Division of Plasma Physics (AAPPS-DPP). The honor recognizes Yoo’s “pioneering work in discovering the fundamental mechanisms of ohmic breakdown phenomena in tokamaks,” according to the AAPPS-DPP website.

The young physicist started studying ohmic breakdown, also known as the plasma startup phase, as a graduate student in the Nuclear Engineering Department at Seoul National University in South Korea. This is the process in which an initial small amount of plasma, which consists of free electrons and atomic nuclei, or ions, is generated from the neutral gas in fusion devices like tokamaks. He continued his research when he took a short post-doctoral position at his alma mater after graduating.

“I have spent a long time, more than five years, developing a new code from scratch because there was no code that can read that complex situation,” Yoo said. “After a long time, I discovered the very fundamental mechanism of the plasma startup phase, more specifically the underlying mechanisms of ohmic breakdown and it was very different from the common belief.”

Yoo joined PPPL in 2018 and has continued his research into ohmic breakdown. He also works with theorist Weixing Wang on developing a gyrokinetic tokamak simulation (GTS) code to help analyze the physics of disruptions, which can halt fusion reactions and damage the interior of doughnut-shaped tokamaks.

“Min-Gu’s work that earned him the prestigious U40 award introduces modern plasma physics into understanding the ohmic breakdown process, being truly a breakthrough to this important classic topic,” Wang said.

To produce an ohmic breakdown, researchers first pump neutral gas into a tokamak before conducting experiments. The breakdown occurs when the researchers ionize the gas to produce the plasma that fuels fusion reactions. The most popular method of doing this is applying an electric field inside the tokamak to create the plasma.

“The underlying mechanism for the phenomenon has received very little attention because it’s the very introductory phase,” Yoo said. “So, it’s not a common ‘hot fusion plasma,’ it’s just a transition between the neutral gas to an initial cold plasma and people thought it’s not interesting and too tedious.”

“What I found during that transition phase was that a very small amount of electrons can generate a very strong electric field. So, the so-called self-generated electric field changed the physics a lot,” he said.

Yoo’s research into ohmic breakdown has broad and practical implications, especially for devices such as ITER, the international fusion experiment under construction in France, and the National Spherical Torus Experiment-Upgrade (NSTX-U), the flagship fusion facility at PPPL. Yoo noted that the ohmic breakdown process wasn’t fully captured in outdated and classical theories. “Using the new theory, we can predict the initial plasma physics more accurately and it would be helpful for designing more robust scenarios,” he said.

“Min-Gu has developed a novel theory and simulation which, for the first time, reveals the crucial role of the plasma response against complex electromagnetic fields during the starting phase of tokamak plasma formation,” Wang said. “One really astonishing aspect is that such high quality, high impact research was accomplished at the first phase of his research career. Min-Gu’s excellent research continues at PPPL while working on tokamak disruption study, a project sponsored by the DOE SciDAC program.”

PPPL, on Princeton University's Forrestal Campus in Plainsboro, N.J., is devoted to creating new knowledge about the physics of plasmas — ultra-hot, charged gases — and to developing practical solutions for the creation of fusion energy. The Laboratory is managed by the University for the U.S. Department of Energy’s Office of Science, which is the largest single supporter of basic research in the physical sciences in the United States, and is working to address some of the most pressing challenges of our time. For more information, please visit science.energy.gov