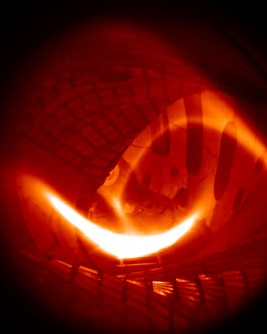 Photo courtesy of the Max Planck Institute for Plasma Physics

An image of the hydrogen plasma inside the W7-X. 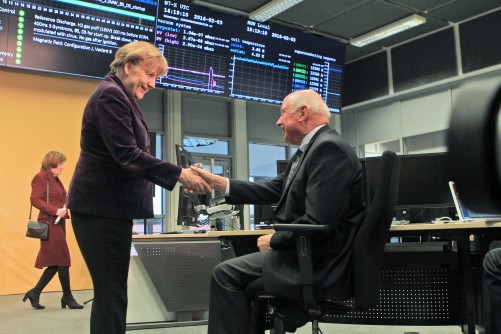 Photo courtesy of the Max Planck Institute for Plasma Physics 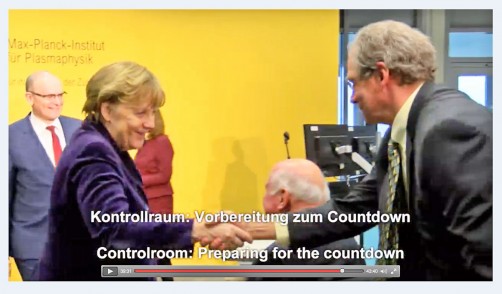 Image courtesy of the Max Planck Institute for Plasma Physics

Hutch Neilson, head of advanced projects at PPPL and the coordinator of the U.S. collaboration at the W7-X, greeting Chancellor Merkel. 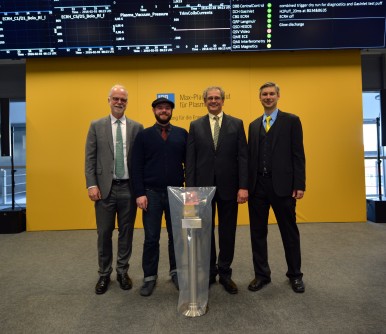 In the W7-X control room behind the button that Merkel used to activate the W7-X hydrogen plasma are, from left: Ed Synakowski, associate director for Fusion Energy Sciences in the U.S. Department of Energy’s Office of Science; physicist Novimir Pablant; Hutch Neilson, head of advanced projects at PPPL and the coordinator of the U.S. collaboration at the W7-X; and physicist Sam Lazerson of PPPL. 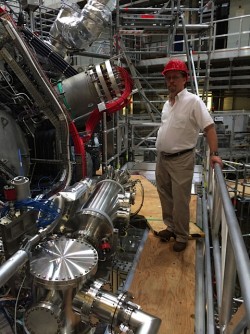 David Gates, the stellarator physics leader at PPPL by the completed X-Ray crystal spectrometer on the W7-X in October. 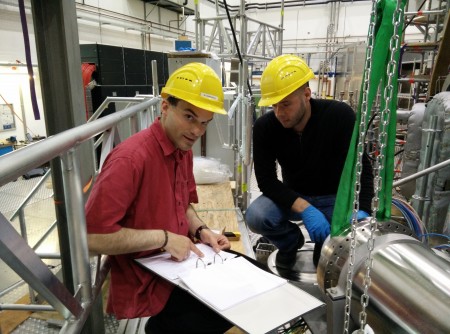 PPPL physicist Novimir Pablant and Andreas Langenberg, of the Max Planck Institute, in front of the housing for components of the X-Ray crystal spectrometer built by Pablant and PPPL engineer Michael Mardenfeld.

Newswise — Princeton Plasma Physics Laboratory (PPPL) physicists collaborating on the Wendelstein 7-X (W 7-X) stellarator fusion energy device in Greifswald, Germany, were on hand for the Feb. 3 celebration when German Chancellor Angela Merkel pushed a button to produce a hydrogen-fueled superhot gas called a plasma. The occasion officially recognized a device that is the largest and most advanced fusion experiment of its kind in the world.

The W7-X is a stellarator, a device that uses twisted magnetic coils to confine the plasma that fuels fusion reactions in a three-dimensional and steady-state magnetic field. It is a departure from the more common fusion device used in fusion experiments, a donut-shaped device called a “tokamak,” such as that used at PPPL.

“It was a day of building excitement and it was a very happy mood because everything is working really well on the experiment,” said Hutch Neilson, head of advanced projects at PPPL and the coordinator of the U.S. collaboration. “It was kind of amazing when the chancellor walked into the control room her eyes lit up.”

Scientists and dignitaries from around the world watched as Merkel pushed the button to create a hydrogen plasma that lasted a quarter of a second. But that was long enough to begin discharging hydrogen into the stellarator and begin heating the plasma to 80 million degrees Centigrade. By 2020, the W7-X is designed to produce a plasma that lasts up to 30 minutes and would demonstrate that stellarators could be a model for the fusion power plants of the future.

Merkel acknowledged that there are “huge scientific challenges” and costs associated with developing fusion energy but she said the possibility of developing fusion energy as a source of generating electric energy is worth the investment. “Rising energy demands and the vision of an almost inexhaustible energy source are convincing arguments for investing in fusion,” Merkel said.

Neilson and Princeton University Vice President for PPPL A.J. Stewart Smith were among the select group of scientists in the W7-X control room, along with Ed Synakowski, DOE Associate Director of Science for Fusion Energy Sciences. PPPL physicists Samuel Lazerson and Novimir Pablant also attended the event along with other U.S. collaborators.

“Major progress for the understanding of plasma” Greeting Merkel on behalf of the U.S. delegation, Smith said the W7-X is a significant achievement that will lead to “major progress for the understanding of plasma.” “The W7-X is a major step for fusion research. Princeton and the whole U.S. team are absolutely thrilled,” Smith said to Merkel in German. “We are so pleased to be involved in this exceptional event.”

“I am very impressed by the professional way the IPP team was able to successfully build such a complex daunting machine,” Smith said. “The success of W7-X shows that the daunting challenges facing stellarators have been solved.”

PPPL physicists and other staff members watched the live stream of the event from the Melvin B. Gottleib auditorium at PPPL and applauded when the live stream concluded at the end of Smith’s remarks.

The hydrogen plasma is “a step on the path to making the device perform as planned,” said David Gates, a PPPL physicist and stellartors physics leader, who was on hand at W7-X for the first test plasma and watched the first hydrogen plasma at PPPL. “From a plasma physicist’s point of view, this next phase of research is an important milestone.”

PPPL leads the U.S. collaboration with W7-X scientists, which is funded by $4 million annually from the Department of Energy’s Office of Science. PPPL scientists and technicians built some key components of the machine, which took some 20 years and €1 billion to build. Collaborators include researchers from Los Alamos and Oak Ridge National Laboratories, as well as researchers and students from MIT, the University of Wisconsin, Auburn University, and Xantho Technologies, LLC. “Exceeding expectations”

Neilson said the experiment is already getting good results. “We're getting data and physics results from it exceeding expectations for what everybody thought would be accomplished during this start-up period.”

PPPL researchers designed and delivered the five massive 2,400-pound trim coils that fine-tune the shape of plasma in fusion experiments. Physicists also designed and built an X-ray spectrometer for measuring the plasma temperature. A current project is the design and construction of divertor scraper units that intercept heat from the plasma to protect divertor targets from damage.

PPPL researchers have also collaborated on research at the W7-X. Lazerson has been at the W7-X since March of 2015 and performed one of the first experiments on the machine when he mapped the structure of the magnetic field and proved that the main magnet system, and the trim coils that PPPL designed and had built in the U.S. were working as intended. He presented his research at the APS Division of Plasma Physics Conference in November. Pablant used the X-ray spectrometer to make the first plasma temperature measurements on W7-X.

“I was really proud of the American contingent for the work they’ve done,” Neilson said the evening of the event. “We’ve made ourselves as indispensable as it's possible to be. We’re not on the periphery. We’re doing things that matter.”

Two approaches to the same problem

Neilson said stellarators and tokamaks are simply two different approaches to the same difficult challenge of developing fusion as an energy source. He added that the W7-X is putting more attention on the potential of stellarators.

PPPL has taken a different approach to stellarators with its quasi-axisymmetric stellarator or QUASAR, which was not completed. With W7-X now operating, it could lead the U.S. to reconsider stellarators, Neilson said. “For 10 years, the focus is going to be on W7-X itself,” he said, “but it does create an atmosphere in which it’s reasonable to ask, ‘What about us?’ ” 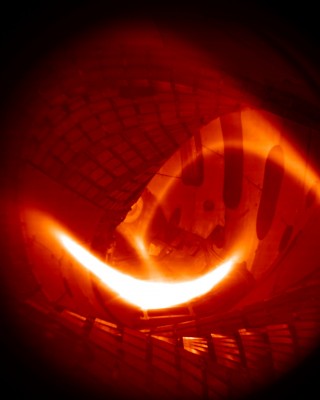 Caption: An image of the hydrogen plasma inside the W7-X. 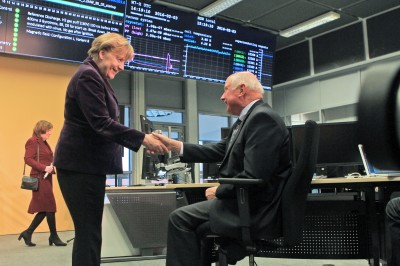 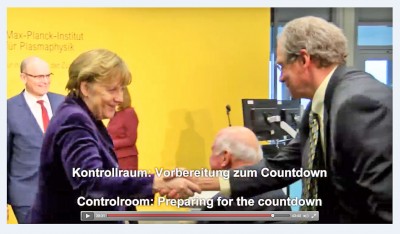 Caption: Hutch Neilson, head of advanced projects at PPPL and the coordinator of the U.S. collaboration at the W7-X, greeting Chancellor Merkel. 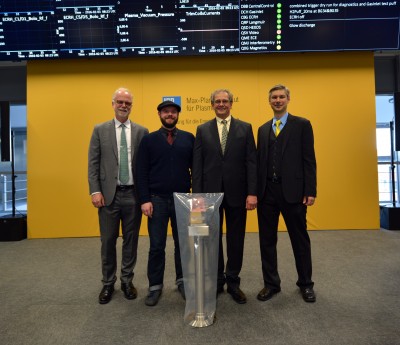 Caption: In the W7-X control room behind the button that Merkel used to activate the W7-X hydrogen plasma are, from left: Ed Synakowski, associate director for Fusion Energy Sciences in the U.S. Department of Energy’s Office of Science; physicist Novimir Pablant; Hutch Neilson, head of advanced projects at PPPL and the coordinator of the U.S. collaboration at the W7-X; and physicist Sam Lazerson of PPPL. 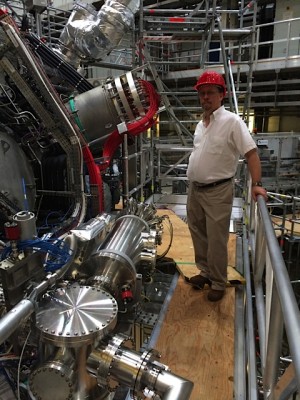 Caption: David Gates, the stellarator physics leader at PPPL by the completed X-Ray crystal spectrometer on the W7-X in October. 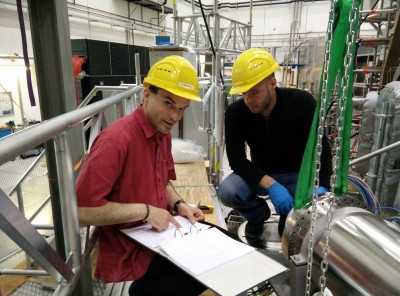 Caption: PPPL physicist Novimir Pablant and Andreas Langenberg, of the Max Planck Institute, in front of the housing for components of the X-Ray crystal spectrometer built by Pablant and PPPL engineer Michael Mardenfeld.