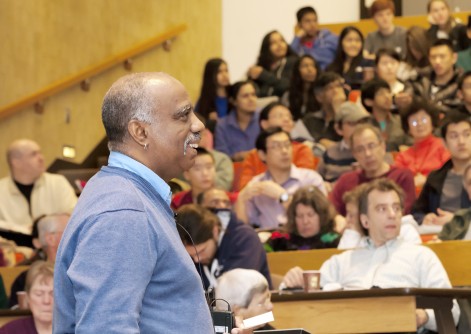 Newswise — The U.S. Department of Energy’s Princeton Plasma Laboratory’s popular Science on Saturday lecture series will have a new name when it begins on Jan. 10. “The Ronald E. Hatcher Science on Saturday Lecture Series” honors the late PPPL engineer who spent some 20 years organizing the series and serving as the unofficial master of ceremonies.

The free nine-week lecture series will continue to offer a wide variety of science topics from top experts in their fields aimed at a high school level. This year’s series features several lectures by PPPL scientists.

Hatcher died on March 24 just two weeks after last year’s series ended. He was well known to countless students and Science on Saturday regulars for beginning each lecture with personal chats with the renowned scientists who gave the lectures.

Andrew Zwicker, head of the Science Education Department, said those personal introductions offered the thousands of students who attended the series over the years a glimpse into the lives and careers of scientists. “He started every lecture by asking about favorite teachers, hobbies, the things that would let young people know about how these people got involved in science,” Zwicker said. “We’re going to continue that tradition before each lecture.”

That personal touch was no doubt an inspiration to many of the young people, Zwicker said. “We’ll never know how many young people Ron helped set along a career in science,” he said.

Hatcher also coordinated the wide-ranging Science on Saturday list of speakers and topics, which drew top experts on topics ranging from neurology to microbiology to physics. “He had this list of speakers that he got from I don’t know where,” said Deedee Ortiz, a program administrator in Science Education. “He just knew so many people and he picked amazing speakers. Every single time he hit it out of the park.”

A principal engineer at PPPL, Hatcher made important contributions to systems that analyze the power systems of the $94 million upgrade of the National Spherical Torus Experiment. He worked on the power supply of numerous other experiments during his 30-year career at PPPL, including the Tokamak Fusion Test Reactor. He also worked on numerous other experiments nationally and internationally, most recently the Wendelstein 7-X stellarator in Greifswald, Germany.

To the visitors who attended Science on Saturday lectures, Hatcher was known for his involvement with the lectures. “Not having him here is a huge loss, it’s a huge impact on the program,” Ortiz said. “We have regulars who come every single week and they’re all going to miss him.”

For Hatcher’s colleagues, the start of the series will inevitably bring back memories of Hatcher. “The first lecture will be very sad,” Zwicker said. “It’s very, very sad and bittersweet.”

"Consciousness and the Social Brain"

This year’s lecture topics range from psychology to energy and the environment. The first talk on Jan. 10 by Michael Graziano, of Princeton University’s Department of Psychology, will focus on “Consciousness and the Social Brain.” Princeton University’s Emily Carter, director of the Andlinger Center for Energy and the Environment, will discuss “The Road to A Sustainable Energy Future?” on Jan. 31.

There will be lectures by PPPL physicists. On Jan. 17, PPPL physicist Samuel Lazerson will discuss devices called stellarators that use complex, twisted coils to confine plasma in fusion experiments. On Feb. 14, physicist Clayton Myers will discuss “Honey, I Shrunk the Plasma: Studying Astrophysical Processes in Laboratory Experiments.”

The final lecture of the series will focus on PPPL’s central experiment, the National Spherical Torus Experiment, (NSTX-U), which is currently undergoing a $94 million upgrade. On March 14, Jonathan Menard, a principal research physicist and program director for NSTX, will discuss “Scientific Opportunities and Challenges in the Upgraded National Spherical Torus Experiment.”

The lectures begin at 9:30 a.m. at PPPL, which is located at 100 Stellarator Road, Princeton, off Scudders Mill Road. Visitors should plan to come early because seats fill up quickly. PPPL’s doors open at 8:15 a.m. and there will be refreshments for early birds. (There is no lecture on Feb. 21 due to the Department of Energy’s New Jersey High School Science Bowl®).

No registration is required. However, visitors must show photo identification at the security gate. Directions and visitor information can be found at http://www.pppl.gov/about/visiting-pppl. If a Science on Saturday lecture must be canceled due to inclement weather, a notice will be left on the Science on Saturday Hotline, 609-243-2121.

A downloadable schedule is available at: http://www.pppl.gov/education/science-education/programs/ronald-e-hatcher-science-saturday-lecture-series.

PPPL, on Princeton University's Forrestal Campus in Plainsboro, N.J., is devoted to creating new knowledge about the physics of plasmas — ultra-hot, charged gases — and to developing practical solutions for the creation of fusion energy. Results of PPPL research have ranged from a portable nuclear materials detector for anti-terrorist use to universally employed computer codes for analyzing and predicting the outcome of fusion experiments. The Laboratory is managed by the University for the U.S. Department of Energy’s Office of Science, which is the largest supporter of basic research in the physical sciences in the United States, and is working to address some of the most pressing challenges of our time. For more information, please visit science.energy.gov.