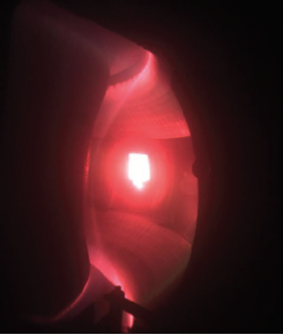 Photo of white-hot limiter glowing in contact with the plasma during an EAST discharge.

Newswise — Scientists at the U.S. Department of Energy's Princeton Plasma Physics Laboratory (PPPL) have helped design and test a component that could improve the performance of doughnut-shaped fusion facilities known as tokamaks. Called a "liquid lithium limiter," the device has circulated the protective liquid metal within the walls of China's Experimental Advanced Superconducting Tokamak (EAST) and kept the plasma from cooling down and halting fusion reactions. The journal Nuclear Fusion published results of the experiment in March 2016. The research was supported by the DOE Office of Science.

"We demonstrated a continuous, recirculating lithium flow for several hours in a tokamak," said Rajesh Maingi, head of boundary physics research and plasma-facing components at PPPL. "We also demonstrated that the flowing liquid lithium surface was compatible with high plasma confinement and with reduced recycling of the hydrogen isotope deuterium to an extent previously achieved only with evaporated lithium coatings. The recirculating lithium provides a fresh, clean surface that can be used for long-lasting plasma discharges."

Along with Maingi, the research team included engineer Charles Gentile and benefitted from key leadership and insights from physicist Leonid Zakharov, who previously worked at PPPL. Scientists from the Institute of Plasma Physics at the Chinese Academy of Sciences were part of the team, which built the limiter to use only a small amount of lithium and operate at low pressure to ensure safety.

The device incorporates an electromagnetic pump that circulates the lithium from a distributor to the top of an angled guide plate inside the EAST tokamak. This pump works with the magnetic field within EAST to drive the lithium to the top of the plate during plasma discharges. The lithium then flows down the front surface of the plate and serves as the main point of contact between the plasma and the plasma-facing components of the EAST vessel.

Serving as the main point of contact with plasma enables the lithium to absorb the hot deuterium ions that drift from the center of the plasma, and keeps them from striking the interior walls of the tokamak and cooling down. Limiting the amount of cool deuterium at the edge of the plasma reduces the difference in temperature between the hot plasma center and the cooler edge, and reduces turbulence. As a side note, however, contact with the ions was found to slightly damage the thin stainless steel foil surface of the limiter device, prompting work on an improved design.

Researchers increased their control of the amount of lithium that flowed down the front of the guide plate by varying the amount of electric current to the electromagnetic pump. This control was important because researchers did not know before the experiment how much lithium was required for optimum plasma performance. More control of the limiter means more control over the performance of a tokamak, a crucial ability when trying to create and maintain optimal conditions for fusion reactions.

All in all, the experiment confirmed that liquid lithium can be driven through an electromagnetic pumping device that works with a tokamak’s magnetic field to raise and recirculate the liquid metal and improve tokamak performance. Next step in the research will be to modify the surface of the limiter to reduce the damage caused by contact with the ions.