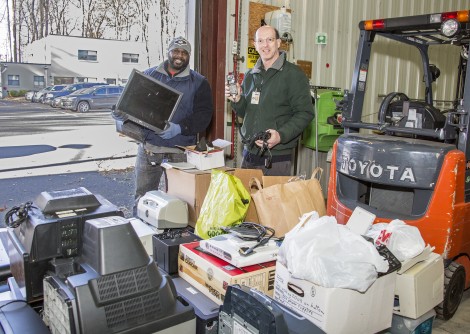 Newswise — The Princeton Plasma Physics Laboratory (PPPL) has received two national awards for its green purchasing program, adding to the long list of honors the Laboratory’s environmental program has received over the past several years.

“We are very pleased to receive the awards as recognition of the Lab’s continued focus on sustainable purchasing,” said Robert Sheneman, head of the Environmental Services Division.

PPPL and other national laboratories funded by the Department of Energy are required to meet federal standards set by Executive Order 13693, signed by President Obama in February of 2015, to reduce greenhouse gas emissions by 2025. The executive order replaces a previous one that set goals to reduce greenhouse gases by 2015. PPPL is required to report on its initiatives to reduce energy, cut down on waste and increase its purchases of green products. Both awards are based on data from PPPL’s sustainability plan, which it submits to the DOE each year.

PPPL received the EPEAT award last week. It was the second year the Laboratory was honored for its purchase of green electronics that not only use less energy but also can be reused or recycled when they have outlived their usefulness. Every printer purchased last year meets the standards of EPEAT, a worldwide rating system developed by the Green Electronics Council, based in Portland, Oregon. Sheneman said his division works with PPPL’s IT Department to find greener electronics and track the purchases. “We’re always looking for ways to incorporate some of these things into how we do business, but we’re not going to ask the Laboratory to spend more money than they would otherwise unless it makes sense,” Sheneman said. “These products are very cost-competitive with traditional products.”

The certificate for the award states that PPPL’s green electronics purchases will avoid disposing of the equivalent of 286 kilograms of hazardous waste and will eliminate enough waste to equal one U.S. household’s waste for eight months, the equivalent of 1,195 kilograms.

The energy saved by the products will also have the following effects on the environment, according to the Green Electronics Council: • Save $10,995 in energy costs. • Save 120,900 kWh of electricity – enough to power nine U.S. homes for a year. • Avoid 187 kilograms of water pollution emissions • Reduce 20.95 metric tons of greenhouse gas emissions – the equivalent of taking 15 average U.S. cars off the road.

The silver Green Buy purchasing award that PPPL received in April recognizes the Laboratory’s purchase of numerous green products as well as its composting and recycling program. PPPL purchases a wide variety of such products. Last year, 95 percent of cleaning products purchased for the Laboratory were bio-based, according to Leanna Meyer, a PPPL environmental scientist. The Laboratory also uses bio-based fuel for some vehicles and requires Brock, the company that runs the cafeteria, to purchase compostable plates and dinnerware. Half of all food served in the cafeteria is from local sources.

“Facility and Site Services continues to include the purchase of bio-based products, non-toxic paints, and recycled content products in its plan as an effort to ensure that Executive Order 13693 is in place at PPPL,” said Margaret Kevin King, building and grounds supervisor. “The purchase and use of these environmentally preferred products in the janitorial and facility group ensures environmental safety and enhances health, wellness and productivity.”