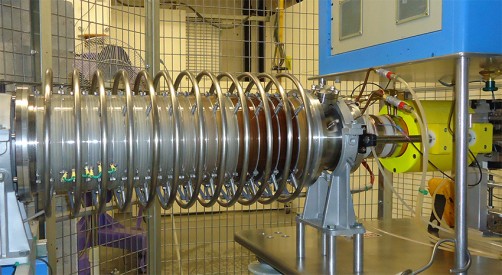 The ion accelerator at the Laboratory for Experimental Nuclear Astrophysics produces the highest intensity proton beam current in the world for measuring nuclear fusion reactions that take place in stars.

Stars shine because nuclear reactions in their interiors convert mass to energy at a rate of many million tons each second. At the same time, these nuclear reactions change the composition of the matter in the stellar interior. Thermonuclear fusion takes place quiescently in stars that are much older than the Sun, and also explosively in novae and supernovae. To explain how stars work, we need to measure the rates of the important nuclear reactions. But direct measurements of these nuclear reactions are extremely difficult because they occur at a tiny rate in the laboratory. Thanks to a new experimental technique, scientists have now measured a crucial fusion reaction, involving hydrogen (H) and a rare isotope of oxygen (17O), that occurs inside stars.

The ability to accurately determine the rate of this H-17O fusion reaction provides nuclear physicists with another key puzzle piece, alongside direct observations of oxygen elemental and isotopic abundances in stellar atmospheres and in primitive meteorites, to zero in on complete and accurate models of stars. This information helps establish strong constraints for stellar models, probe complex mixing of matter deep inside stars, and reveal the origin of 17O in our Galaxy.

To improve our understanding of the Galaxy, scientists study in the laboratory the nuclear reactions that power stars. Such experiments are extremely difficult because the nuclear reactions occur at a tiny rate and their signal is overwhelmed by the environmental background radiation. A breakthrough occurred at the Laboratory for Experimental Nuclear Astrophysics (LENA) at the Triangle Universities Nuclear Laboratory, where a combination of a very high hydrogen beam current (2.0 mA on target) and strong detector background reduction (by two orders of magnitude) enabled researchers to probe the H-17O fusion reaction directly at stellar energies. The results impact our understanding of the origin of 17O in the Galaxy and of how matter is transported and mixed in stars from the interior to the surface.