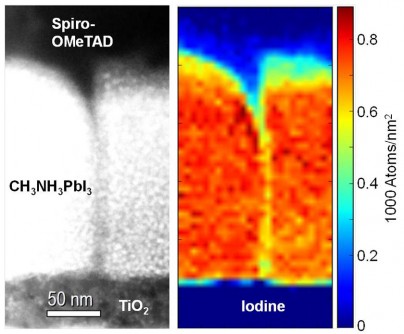 What if solar panels could be used to power cell phones or other mobile electronics? Researchers may be a step closer thanks to a new addition to perovskite solar cells, which don’t rely on silicon, like conventional cells do. In the laboratory, the researchers designed solar cells with large crystals of perovskite and a specially tailored material sandwiched between the grains, and the result is a more efficient solar cell.

Creation and characterization of a new hybrid perovskite-based structure that makes use of all absorbed packets of sunlight, or photons, to generate electricity enables an industrially scalable, cost-effective approach for producing solar-panel materials that are less expensive and more flexible than silicon.

Organometallic halide perovskites are under development as solution-processed solar cells that are less costly and more flexible than silicon. Unfortunately, during drying to form a film, grain boundaries develop between perovskite crystals that typically act as sinks where photo-generated charge carriers – electrons and holes – become trapped, recombine, and are lost. Whereas humidity normally degrades perovskite solar-cell efficiencies, researchers turned the tables to use humidity during the drying process to chemically drive the formation of large single crystals of perovskite with vertical, active grain boundaries that together harvest nearly 100 percent of the free carriers generated by absorbed photons in a solar cell. To activate the grain boundaries to suppress carrier recombination and to transport, rather than trap, the carriers, a hole-transport medium (Spiro-OMeTAD) was used to infiltrate the boundaries. The material converted 16 percent of the incident sunlight into power, which is comparable to solar cells of cadmium and tellurium and higher than those of amorphous silicon. This approach represents a promising path for industrial printing of hybrid films to make lightweight, flexible solar panels for mobile electronics and building-integrated photovoltaic applications.

This research was conducted at the Center for Nanophase Materials Sciences, a DOE Office of Science User Facility supported by the Office of Basic Energy Sciences.