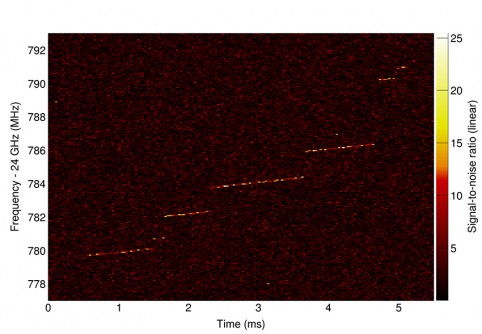 A 83mKr conversion electron as seen by Project 8. At the time of the decay, there is a sudden onset of power at a frequency directly related to the initial kinetic energy. The frequency rises as energy is transferred to cyclotron radiation. The electron exhibits a series of discrete steps in frequency as it scatters on hydrogen in the vacuum environment, before finally scattering out of the magnetic trap.

The absolute mass of the neutrino is one of the most critical unknown quantities in nuclear and particle physics and cosmology. Neutrinos may have been significant players in the evolution of large-scale structure in the universe and could be a window into physics beyond the Standard Model at much higher energy scales.

The Project 8 collaboration, a group of scientists and engineers at the Massachusetts Institute of Technology, University of Washington, University of California-Santa Barbara, Pacific Northwest National Laboratory, and Yale University, constructed a prototype instrument at the University of Washington to demonstrate a new electron spectroscopy technique that could be used for a next-generation tritium endpoint experiment. The technique, dubbed Cyclotron Radiation Emission Spectroscopy (CRES), is based on detection of the faint (10-15 Watt) microwave signal of tritium endpoint electrons in a 1-Tesla magnetic field. The microwave frequency is related to the kinetic energy of the electrons by relativistic kinematics. The demonstration was performed with monoenergetic conversion electrons from 83mKr, which include a line very close to the tritium endpoint. The best reported resolution is 15 eV (full-width at half-maximum) measured for the 30,477-eV emission. The resolution is understood to follow from the parabolic shape of the magnetic trap used to confine electrons during the measurement, and will be improved in the future with more uniform trapping geometries.

Project 8 collaborators are working to make initial measurements with molecular tritium gas in a similar configuration. In the future, CRES will need to be scaled up in size to accommodate enough tritium for sufficient neutrino mass sensitivity, and use an atomic tritium source to evade the systematic smearing of electron energies introduced by the rotations and vibrations of the tritium molecule.

Project 8 is supported by

The 83mKr used in this research was supplied by the U.S. Department of Energy Office of Science by the Isotope Program in the Office of Nuclear Physics. A portion of the research was performed using PNNL Institutional Computing at Pacific Northwest National Laboratory. 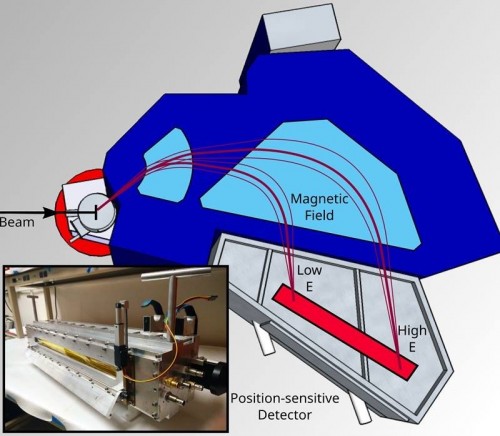