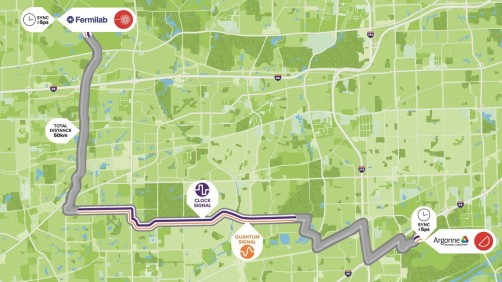 To test the synchronicity of two clocks — one at Argonne and one at Fermilab — scientists transmitted a traditional clock signal (blue) and a quantum signal (orange) simultaneously between the two clocks. The signals were sent over the Illinois Express Quantum Network. Researchers found that the two clocks remained synchronized within a time window smaller than 5 picoseconds, or 5 trillionths of a second.

Newswise — The world awaits quantum technology. Quantum computing is expected to solve complex problems that current, or classical, computing cannot. And quantum networking is essential for realizing the full potential of quantum computing, enabling breakthroughs in our understanding of nature, as well as applications that improve everyday life.

But making it a reality requires the development of precise quantum computers and reliable quantum networks that leverage current computer technologies and existing infrastructure.

Recently, as a sort of proof of potential and a first step toward functional quantum networks, a team of researchers with the Illinois‐Express Quantum Network (IEQNET) successfully deployed a long-distance quantum network between two U.S. Department of Energy (DOE) laboratories using local fiber optics.

The experiment marked the first time that quantum-encoded photons — the particle through which quantum information is delivered — and classical signals were simultaneously delivered across a metropolitan-scale distance with an unprecedented level of synchronization.

The IEQNET collaboration includes the DOE’s Fermi National Accelerator and Argonne National laboratories, Northwestern University and Caltech. Their success is derived, in part, from the fact that its members encompass the breadth of computing architectures, from classical and quantum to hybrid.

“To have two national labs that are 50 kilometers apart, working on quantum networks with this shared range of technical capability and expertise, is not a trivial thing,” said Panagiotis Spentzouris, head of the Quantum Science Program at Fermilab and lead researcher on the project. “You need a diverse team to attack this very difficult and complex problem.”

And for that team, synchronization proved the beast to tame. Together, they showed that it is possible for quantum and classical signals to coexist across the same network fiber and achieve synchronization, both in metropolitan-scale distances and real-world conditions.

Classical computing networks, the researchers point out, are complex enough. Introducing the challenge that is quantum networking into the mix changes the game considerably.

When classical computers need to execute synchronized operations and functions, like those required for security and computation acceleration, they rely on something called the Network Time Protocol. This protocol distributes a clock signal over the same network that carries information, with a precision that is a million times faster than a blink of an eye.

With quantum computing, the precision required is even greater. Imagine that the classical network time protocol is an Olympic runner; the clock for quantum computing is The Flash, the superfast superhero from comic books and films.

To assure that they get pairs of photons that are entangled — the ability to influence one another from a distance — the researchers must generate the quantum-encoded photons in great numbers.

Knowing which pairs are entangled is where the synchronicity comes in. The team used similar timing signals to synchronize the clocks at each destination, or node, across the Fermilab-Argonne network.

Precision electronics are used to adjust this timing signal based on known factors, like distance and speed — in this case, that photons always travel at the speed of light — as well as for interference generated by the environment, such as temperature changes or vibrations, in the fiber optics.

Because they had only two fiber strands between the two labs, the researchers had to send the clock on the same fiber that carried the entangled photons. The way to separate the clock from the quantum signal is to use different wavelengths, but that comes with its own challenge.

“Choosing appropriate wavelengths for the quantum and classical synchronization signals is very important for minimizing interference that will affect the quantum information,” said Rajkumar Kettimuthu, an Argonne computer scientist and project team member. “One analogy could be that the fiber is a road, and wavelengths are lanes. The photon is a cyclist, and the clock is a truck. If we are not careful, the truck can cross into the bike lane. So, we performed a large number of experiments to make sure the truck stayed in its lane.”

Ultimately, the two were properly assigned and controlled, and the timing signal and photons were distributed from sources at Fermilab. As the photons arrived at each location, measurements were performed and recorded using Argonne’s superconducting nanowire single photon detectors.

The network was synchronized so accurately that it recorded only a five-picosecond time difference in the clocks at each location; one picosecond is one trillionth of a second.

“This is the first demonstration in real conditions to use real optical fiber to achieve this type of superior synchronization accuracy and the ability to coexist with quantum information,” Spentzouris said. “This record performance is an essential step on the path to building practical multinode quantum networks.”

This project was funded through the DOE Office of Science, Advanced Scientific Computing Research program.

Fermi National Accelerator Laboratory is America’s premier national laboratory for particle physics research. A U.S. Department of Energy Office of Science laboratory, Fermilab is located near Chicago, Illinois, and operated under contract by the Fermi Research Alliance LLC. Visit Fermilab’s website at https://www.fnal.gov and follow us on Twitter @Fermilab.