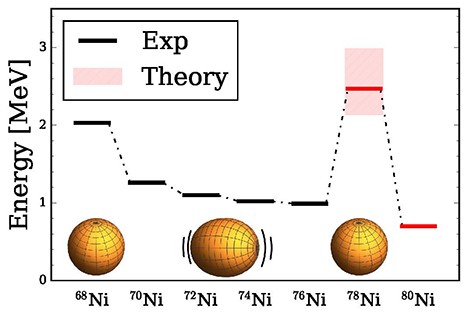 Scientists predict nickel-78 to be doubly magic (meaning it has an ultra-stable number of protons and neutrons) because its first excited state is significantly higher in energy than for neighboring nuclei. As shown in the figure, the energy of the first excited collective state, experimentally (Exp), is higher for the doubly magic nucleus nickel-78. Thick horizontal bars (connected by dashed lines) mark the energies of the first excited states, and the theoretical uncertainty for nickel-78 is shown as a pink band. As indicated by the depicted shapes, nuclei with a low-energy collective state exhibit a softness to surface vibrations, while doubly magic nuclei are stiffer.

How atoms form different elements tells us about the nature of our world and the universe beyond. Within an atom, the number of positively charged protons and neutral neutrons influences the atom. If the number of protons or neutrons equals a “magic” number (2, 8, 20, 28, 50, 82, and 126), it’s more stable and binds better. If both the protons and neutrons equal “magic” numbers, the heart of the atom, or nucleus, is “doubly magic.” Doubly magic nuclei are particularly strongly bound. Nuclear physicists have a sound understanding of doubly magic nuclei that are stable; however, in rare cases, the atom doesn’t behave as expected and there is not a good understanding as to what the magic numbers are. Can the rare atom nucleus 78Ni, having both magic numbers for protons (28) and neutrons (50), but with an extreme excess of neutrons, still be doubly magic? Scientists discovered it is. This finding is critical to understanding the processes that make elements inside supernovas.

Why are some elements formed more often than others? That question matters to those trying to understand our world and the universe. The answer may lie inside supernova, or exploding stars, that produce and spew out certain elements. The team’s work offers calculations that could lead to insights of rare elemental isotopes. Experimental confirmation of the calculations done in this study will be valuable to developing an accurate model of important elemental nuclei and the formation of the heavy elements.

Using the supercomputer Titan at Oak Ridge National Laboratory, scientists performed first-principles computations of the structure of 78Ni and its neighbors. Key observables, such as the neutron separation energies and the energy of the first excited state, confirm the picture of a doubly magic nucleus 78Ni that is more strongly bound than its neighbors are and less prone to surface vibrations. The study makes several predictions, including the energy of a key collective state in 78Ni, and an unexpected level ordering in 79Ni that is strongly influenced by the weak binding due to the extreme neutron excess. These predictions and more await experimental verification. This study offers calculations that could pave the way to new insights and theoretical predictions in heavy rare isotopes and how the universe forms and evolves.

This work was supported by the Office of Nuclear Physics, U.S. Department of Energy, Office of Science under grants DE-FG02-96ER40963, DESC0008499 (NUCLEI SciDAC collaboration), and the Field Work Proposal ERKBP57 at Oak Ridge National Laboratory (ORNL). Computer time was provided by the Innovative and Novel Computational Impact on Theory and Experiment (INCITE) program. This research used resources of the Oak Ridge Leadership Computing Facility located at ORNL, which is supported by the Office of Science of the U.S. Department of Energy under contract DE-AC05-00OR22725.