New post will create scientific research partnerships between PNNL and universities, others 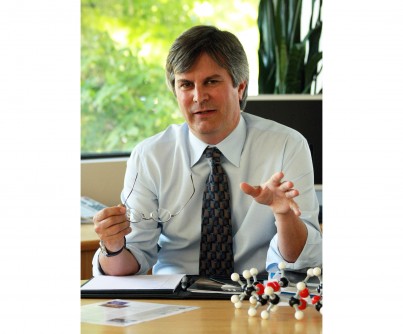 Newswise — RICHLAND, Wash. – Douglas Ray, who has overseen unprecedented growth of Pacific Northwest National Laboratory's fundamental science research portfolio over the past decade, has been named to lead a new office that will identify and create strategic partnering opportunities between PNNL, research universities and other scientific research institutions.

"Doug is extremely well suited to this position and I look forward to working with him to develop and implement a partnership strategy that will significantly enhance our scientific stature and impact," said PNNL Director Steven Ashby.

Prior to his role with FCSD, Ray served as PNNL's deputy director for science and technology and chief research officer from 2005 to 2006, where he was responsible for integrating PNNL's science and technology base to address critical challenges in science, energy and national security, leading PNNL's strategic planning activities, and stewarding PNNL's discretionary research portfolio.

Since joining PNNL as a senior research scientist in 1990, Ray has also held posts as director of PNNL's chemical sciences division, where he helped establish the Institute for Integrated Catalysis, and as deputy director of EMSL, the Environmental Molecular Sciences Laboratory, a national scientific user facility located at PNNL.

Ray earned a bachelor's degree in physics from Kalamazoo College in Michigan in 1979, and a doctorate in chemistry from the University of California at Berkeley in 1985. He was a postdoctoral research associate at the Joint Institute for Laboratory Astrophysics in Boulder, Colorado before joining PNNL.

Ray was elected a Fellow of the American Association for the Advancement of Science in 2013 for "distinguished contributions to physical chemistry and molecular spectroscopy, and for building a world-class chemistry organization at PNNL." He is a member of the American Chemical Society, the American Geophysical Union and the American Physical Society. Ray serves on the Editorial Advisory Board for the American Chemical Society's journal Energy & Fuels, and is a member of the U.S.-Japan Joint Committee for Cooperation in High Energy Physics, the Carbon Capture Simulation Initiative Board of Directors, the Joint BioEnergy Institute Board of Directors, the International Advisory Committee for the Dalian National Laboratory for Clean Energy, the International Energy Agency's Experts Group on Science for Energy and the Scientific Advisory Committee of DOE's Combustion Research Facility.