Researchers harvest long-lived isotopes that are difficult or impossible to acquire otherwise. 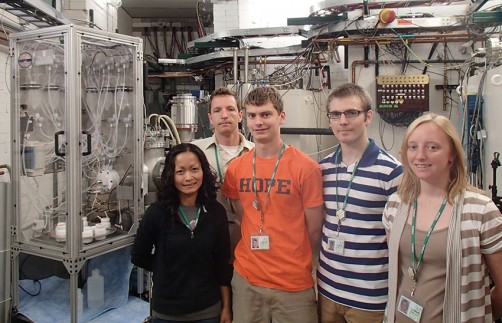 Dr. Aranh Pen (back row) and students Shaun Loveless, Scott Essenmacher, Eric Greve, and Tara Mastren (right to left) are part of the team that is testing a new method to harvest long-lived radioisotopes from the remotely operated aqueous target device (background) at the National Superconducting Cyclotron Lab.

A team of researchers has designed a method to radiochemically harvest several long-lived radioisotopes from the water-cooled target at the future Facility for Rare Isotope Beams (FRIB). Such harvesting would potentially supply isotopes for which there is limited or no other source. The team is now conducting proof-of-principle experiments at the National Superconducting Cyclotron Lab (NSCL), where the FRIB is being fabricated, to demonstrate the feasibility of the harvesting technique.

Some rare long-lived radioisotopes that cannot be easily produced by existing accelerator or reactor methods (such as 67Cu, 32Si, 48V, 85Kr) will be produced in abundance in the FRIB production target. Developing a method to radiochemically harvest these isotopes and purify them will allow their use in environmental monitoring, nuclear medicine, stockpile stewardship, and other activities.

A research team led by Graham Peaslee of Hope College and Suzanne Lapi of Washington University in St. Louis has developed methods to collect specific long-lived radioisotopes suspended in aqueous solutions and to separate potentially useful radioisotopes for further use and study. All these radioisotopes would be produced by the normal operation of the future accelerator FRIB, but until now, nobody has tried to extract the “long-lived” radioisotopes that might be useful. The difficulty lies in the number of very similar isotopes produced at once, and the radiochemical separations that must be performed to “harvest” the important radioisotopes. This team has begun the work by developing an aqueous target into which a mixture of radioisotopes are delivered, and then methods are developed to extract the long-lived isotopes and to purify them. This work could help pave the way for synergistic use of the FRIB facility to not only produce rare isotopes for fundamental science, but to continuously supply isotopes that are hard (or sometimes impossible) to produce in other ways. These radioisotopes would provide opportunities for new science and applications in nuclear medicine, environmental tracers, and stockpile stewardship, and elsewhere. The new method would also serve in training future generations of nuclear scientists and radiochemists.