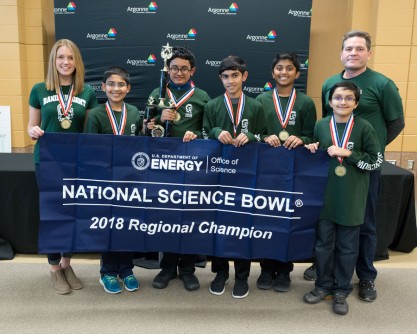 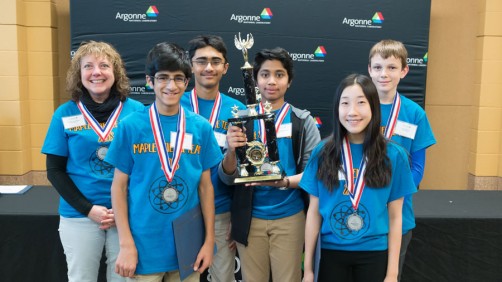 Newswise — There is a competition taking place and yet, in a room full of people, the silence is deafening. Two teams of eager middle school students are seated directly across from a group of scientists and engineers who are asking them challenging math and science questions. The whole room has leaned forward to hear the questions. The students are focused and tuned in, anticipating the next question.

A student buzzes in, the answer is correct, but there is no time to celebrate as they are on to the next one. Each team is answering questions, both teams wanting to be champions. The timer goes off, it is the end of the 12th round of competition and the reigning champions, Daniel Wright Junior High School, take the 2018 title.

"It’s a pretty remarkable opportunity for them in that it gives them a glimpse of a path they can choose to follow themselves.” — Jessica Dietzel, leader of education outreach for Argonne’s  Educational Programs Department

The U.S. Department of Energy’s (DOE) Illinois Regional Middle School Science Bowl is one of more than 100 competitions held across the country from January to March. DOE created the National Science Bowl® in 1991 to encourage students to excel in mathematics and science and to pursue careers in these fields. More than 275,000 students have participated in the program since its inception, making it one of the nation’s largest science competitions. More than 9,000 high school students and 4,500 middle school students are slated to take part in this year’s event.

Students compete as teams of four, with one alternate and a teacher who advises and coaches. The middle schoolers face off in a fast-paced, Jeopardy-meets-Family-Feud style format where they must to answer questions in the areas of life science, physical science, Earth and space science, energy and mathematics.

After the first of a minimum of six rounds that make up the day’s competition, Alissa Chiementi, an eighth-grader from Wredling Middle School, came away smiling. “Ready to move on to Round 2,” she expressed enthusiastically, “At first I was nervous, but I am competitive by nature. Even if I don’t know  the answer, I can use the contextual evidence and answer anyway.” Alissa is considering a math focus for her future studies.

“It’s a good experience for the kids. They get a chance to show what they know, and the questions are a stretch for them, too,” commented Wredling coach Yvette Stahl, the math and science teacher for the Infinity Gifted Magnet Middle School program at Wredling.

This year’s Illinois Regional Middle School Competition was held at Oswego East High School on January 27th. It was a hard-fought competition with Daniel Wright Junior High taking first place over Maple School. Rounding out the top three, for their first time, was Bednarcik Junior High. Daniel Wright, Maple and Bednarcik will all receive a tour of DOE’s Argonne National Laboratory and Daniel Wright will go on to represent the region at the DOE National Science Bowl®  in Washington, D.C. at the end of April.

Thirty science and engineering staff members from Argonne ran the event alongside a few of the University of Chicago graduate students, who served as moderators, judges, scorekeepers and timekeepers. Jessica Dietzel, who joined Argonne in 2016, develops and coordinates science, technology, engineering and math (STEM) competitions and other large events for middle and high school students. She enjoys the energy that students radiate when they share what they know about the sciences.

“The kids have a fantastic time,” she said. “This is a great place for students to test their knowledge and to meet scientists and engineers who work in the very fields they aspire to join. It’s a pretty remarkable opportunity for them in that it gives them a glimpse of a path they can chose to follow  themselves.”

Dietzel believes the program has a lasting impact on participants: She’s already met two Argonne scientists who competed in the Science Bowl in their youth.

Experts say competitions like this offer a rare and valuable outlet for gifted students to pursue a particular interest, inviting them to go far beyond the scope of knowledge typically required for middle school math and science.

Meridith Bruozas, manager of Educational Programs and Outreach at Argonne, said she’s proud to be part of a program that celebrates STEM education.

"Competitions like this help us identify, grow and encourage the next generation of scientists," Bruozas said. "These young people will help us solve the most pressing problems of our age. They're tech-savvy, enthusiastic and highly collaborative. All they need is the opportunity to succeed. We are happy to help them along the way."

The event brings out a spirit of competition and camaraderie. The students are genuine in their desire to work as a team and enjoy the day, regardless of the outcome. Daniel Schalk, an eighth-grader at Troy Middle School, had been in science clubs before with Dr. Barbara Will-Henn,  the Science Bowl coach.

“Dr. Will-Henn encouraged me and reminded me to practice,” he said. “Even if we don’t move on,  I’ll have had the experience of being with the people here.” Dr. Will-Henn teaches an exploratory class called SciCap (Science Capstone), which combines the science and engineering knowledge the students have accumulated at Troy.

Argonne National Laboratory seeks solutions to pressing national problems in science and technology. The nation's first national laboratory, Argonne conducts leading-edge basic and applied scientific research in virtually every scientific discipline. Argonne researchers work closely with researchers from hundreds of companies, universities, and federal, state and municipal agencies to help them solve their specific problems, advance America's scientific leadership and prepare the nation for a better future. With employees from more than 60 nations, Argonne is managed byUChicago Argonne, LLC for the U.S. Department of Energy's Office of Science. 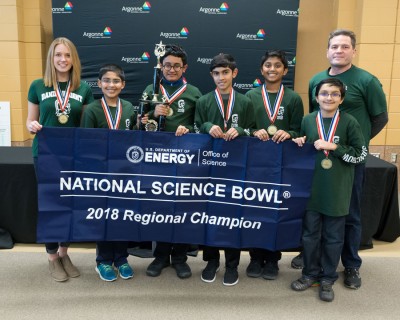 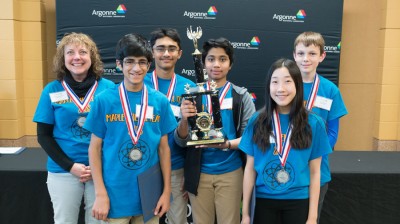