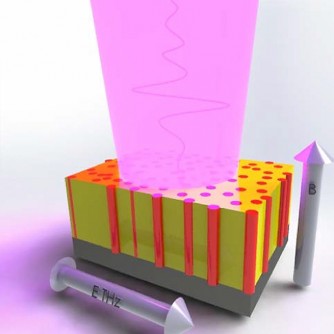 Electronics could work faster if they could read and write data at terahertz frequency, rather than at a few gigahertz. Creating such devices would be eased with materials that can undergo a huge change in how easily they conducted electricity in response to a magnetic field at room temperature. Scientists believe thin films of perovskite oxides hold promise for such uses. However, such behavior has never been seen at these frequencies in these films. Until now. Via terahertz pulses, scientists at Center for Integrated Nanotechnologies and the United Kingdom discovered colossal changes in electricity’s flow at the desired frequencies and temperature.

In the designer composites, electrical conductivity can be controlled by both an applied magnetic field and temperature. The team’s work highlights a new approach to control conductivity in these thin films. Such materials might revolutionize the design of memory devices.

The work at Los Alamos National Laboratory was supported by the National Nuclear Security Administration’s (NNSA’s) Laboratory Directed Research and Development Program and was performed, in part, at the Center for Integrated Nanotechnologies, an Office of Science user facility operated for the U.S. Department of Energy Office of Science. Los Alamos National Laboratory, an affirmative action equal opportunity employer, is operated by Los Alamos National Security, LLC, for the NNSA of the Department of Energy. The work at the University of Warwick was supported by the Engineering and Physical Sciences Research Council.