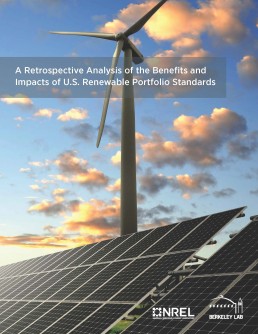 A Retrospective Analysis of the Benefits and Impacts of U.S. Renewable Portfolio Standards

Newswise — Berkeley, CA — A new study estimates that $2.2 billion in benefits came from reduced greenhouse gas emissions and $5.2 billion from reductions in other air pollution for state renewable portfolio standard (RPS) policies operating in 2013. The report also shows national water withdrawals and consumption were reduced by 830 billion gallons and 27 billion gallons in 2013, respectively. The report, entitled A Retrospective Analysis of the Benefits and Impacts of U.S. Renewable Portfolio Standards, was conducted by researchers from the U.S. Department of Energy’s Lawrence Berkeley National Laboratory (Berkeley Lab) and National Renewable Energy Laboratory (NREL) and evaluates the benefits and other impacts of RPS policies.

RPS policies require utilities or other electricity providers to meet a minimum portion of their load with eligible forms of renewable electricity. They currently exist in 29 U.S. states plus Washington, D.C., and have been a driver for renewable electricity generation in the United States over the past decade. Many states are currently considering whether to extend, eliminate, or otherwise revise existing RPS policies. “This work is intended to inform these ongoing discussions by helping states evaluate RPS programs,” said Berkeley Lab’s Ryan Wiser, one of the report authors.

The study takes care to describe its methods and highlights uncertainties in its findings. For example, benefits from greenhouse gas reductions were estimated to range from $0.7 to $6.3 billion, reflecting differences in underlying estimates of damages caused by climate change. Similarly, air pollution reduction benefits—which arise primarily from avoided premature mortality—were estimated to range from $2.6 to $9.9 billion in 2013, reflecting differences in underlying epidemiological literature, among other factors.

“Our goal was to estimate the magnitude of RPS benefits and impacts at a national-level, using established methodologies, while recognizing that individual states can perform their own, more-detailed assessments,” adds NREL’s Jenny Heeter, another of the report’s authors.

In addition to evaluating environmental benefits, the study also assessed other impacts. Specifically, the research estimates that RPS policies supported 200,000 renewable energy-related jobs in 2013, saved consumers up to $1.2 billion from reduced wholesale electricity prices and another $1.3 to $3.7 billion from reduced natural gas prices. Consumer savings from reduced electricity and natural gas prices occur because renewable electricity displaces other electricity generation with higher operating costs, much of which is fueled by natural gas. The study is careful to describe these as impacts rather than benefits as they represent resource transfers from some stakeholders to others, rather than net societal benefits on state, national, or global scales.

This work was a follow-up and complement to an earlier study by the two labs that focused on the costs of state RPS programs to-date and that noted the need for a full understanding of the potential benefits, impacts, and costs of RPS programs. To that end, this most recent study provides a point of comparison for estimates of RPS program costs. Based on the results of this national study, benefits from reduced greenhouse gas emissions equate to 0.7 to 6.4 cents per kilowatt-hour (kWh) of renewable energy, while benefits from reduced emissions of criteria air pollutants amount to 2.6 to 10.1 cents per kWh. Consumer savings from wholesale electricity market and natural gas price reductions represent another 0 to 1.2 cents per kWh and 1.3 to 3.7 cents per kWh, respectively.

Although the study takes a national view—evaluating all state RPS programs as a whole—many of the associated benefits and impacts were highly regional. For example, the economic benefits from air pollution reductions are associated mostly with reduced sulfur dioxide (SO2) emissions from coal-fired power plants and are concentrated primarily in the Mid-Atlantic, Great Lakes, Northeast, and Texas. Reductions in water withdrawal and consumption were largest in California and Texas respectively—both states that regularly experience droughts—while renewable energy jobs from RPS projects were concentrated mostly in California, where large amounts of utility-scale photovoltaic generation was being built in 2013.

Additional information and research on state RPS policies are available at rps.lbl.gov.

This research was supported by the U.S. Department of Energy’s Strategic Programs Office within the Office of Energy Efficiency and Renewable Energy.