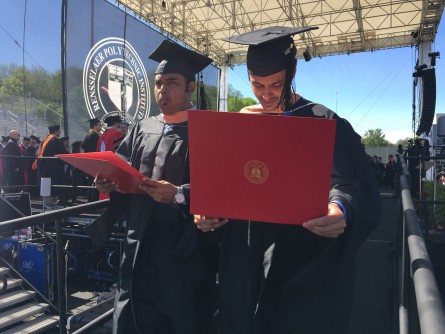 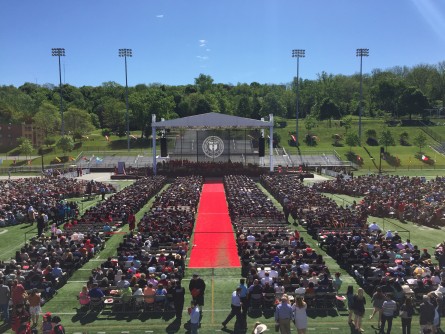 Newswise — Troy, N.Y. – Describing the dizzying pace of technological innovation, former United States Secretary of Energy Ernest J. Moniz urged graduates to “anticipate career change, welcome it, and manage it to your and your society’s benefit” at the 211th Commencement at Rensselaer Polytechnic Institute (RPI) Saturday.

“Technologies are coming to us at dizzying speed. Faster than as had been predicted, faster even than yesterday. We live at a time of accelerating clock speed that challenges us as individuals and as governments, and as institutions, to adapt, to change, and to succeed,” said Moniz.

Rensselaer and other highly ranked technological institutions provide graduates with the skillset to perform and thrive in such circumstances, Moniz continued. Echoing his friend Bill Gates in his own recent advice to college graduates, Moniz recommended a career in energy, a sector where innovation is needed to address the urgent global challenge of climate change. Despite current political uncertainty, Moniz said “there is no going back – the world is going to a low-carbon future.” The potential for innovation in the energy and other sectors is necessary and “a great opportunity for Rensselaer.”

The clock speed of change can be “overwhelming and debilitating for those who do not have the advantages of a Rensselaer education,” Moniz said, which creates another need, that of shaping a world that benefits all, rather than the advantaged few. “We cannot succeed collectively or individually until we figure out how to bring more of our fellow citizens along with respect and opportunity for meaningful contributions to the public good in this new world of work.”

Moniz addressed 1,841 graduates, their families, and friends at the 211th Rensselaer Commencement today, held at the East Campus Athletic Village. During the ceremony, Rensselaer awarded a total of 2,025 degrees. They include: 122 doctoral degrees, 456 master’s degrees, and 1,447 bachelor’s degrees. Some graduates have earned more than one degree. More than 10,000 graduates and visitors are expected to attend the ceremony.

Invoking the examples of Commencement honorands Moniz and Roger Ferguson – each of whom is credited with the swift resolution of a crisis that materialized on their watch – Rensselaer President Shirley Ann Jackson assured graduates that they are well prepared to face “moments of truth,” occasions “when the stakes are extremely high, when you must rise to the occasion.” Just as Moniz, as Secretary of Energy, helped to negotiate an accord converting Iran’s nuclear infrastructure to peaceful projects, and as Ferguson, as Governor of the United States Federal Reserve, acted in the immediate wake of 9/11 terrorist attacks to assure a swift, confident, and humane response to the public, so graduates may find that their legacies may be “determined by mere moments in time,” Jackson said.

These moments, Jackson said, may take the form of a crisis, or of a window of opportunity that opens unexpectedly. Many years of preparation, hard work, and experience can be tested in an instant.

“All of us face such moments in our lives — times when we simply cannot disappoint our families, our partners, our employers, our country, or all of humanity,” said Jackson. “As you leave us for wonderful careers and lives, I hope that you continue to develop the character that will allow you to act with great honor and discipline in a crisis — or, in an instance of opportunity that sweeps down with the abruptness of a crisis.”

Class of 2017 Presidents Kyle Neumann and Michael Gardner emphasized the “importance of the diversity of our class and how diverse perspectives expand our view of the world.” Neumann and Gardner shared the presidency and wrote the speech together, with Neumann addressing the graduates on behalf of them both.

"No matter what you participated in at Rensselaer, we all made new friends, people of different backgrounds than we grew up with at home. It is through the friends we made that we learned lessons that helped us grow along with the technical knowledge of our coursework,” Neumann said. “Now at Commencement we are more technically skilled, more aware of new ideas and others’ perspectives. We will continue our learning in academia or industry with new mentors to push us further in our passions and broaden our world view. All the while we will keep RPI’s mission at heart: ‘Why not change the world.’"

The graduates were also addressed by the Roger W. Ferguson Jr., president and chief executive officer of TIAA.

Ferguson said he had three pieces of advice for graduates: embrace the reality of change; commit to a life of continuous learning; think of your career as a journey. A truly satisfying career, Ferguson said, is not about steadily progressing in a straight line to ever-bigger titles and paychecks.

“The purpose of the journey is figuring out what you like to do, where you like to do it, and with whom you want to work. Recognize that at different points in your life, you may answer those questions differently,” Ferguson said. “My point to you is this – don’t be too rigid about your own career path and goals. Be open to trying different things. Don’t be afraid to change course if that’s what your heart is telling you to do. Take advantage of opportunities that come your way, and be willing to take reasonable risks.”

Ernest J. Moniz served as the 13th United States Secretary of Energy from 2013 to January 2017. As Secretary, he advanced energy technology innovation, nuclear security and strategic stability, cutting-edge capabilities for the American scientific research community, and environmental stewardship. He strengthened the Department of Energy (DOE) strategic partnership with its 17 national laboratories and with the Department of Defense and the broader national security establishment. Specific accomplishments included producing analytically based energy policy proposals that attracted bipartisan support and implementing legislation, leading an international initiative that placed energy science and technology innovation at the center of the global response to climate change, and negotiating alongside the Secretary of State the historic Iran nuclear agreement. He received an Honorary Doctor of Science degree at the ceremony.

Roger W. Ferguson Jr. is president and chief executive officer of TIAA, the leading provider of retirement services in the academic, research, medical, and cultural fields and a Fortune 100 financial services organization. Ferguson is the former vice chairman of the Board of Governors of the U.S. Federal Reserve System. He represented the Federal Reserve on several international policy groups and served on key Federal Reserve System committees, including Payment System Oversight, Reserve Bank Operations, and Supervision and Regulation. As the only Governor in Washington, D.C., on 9/11, he led the Fed’s initial response to the terrorist attacks, taking actions that kept the U.S. financial system functioning while reassuring the global financial community that the U.S. economy would not be paralyzed. He received an Honorary Doctor of Laws degree at the ceremony. 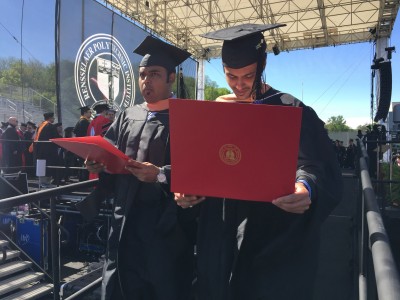 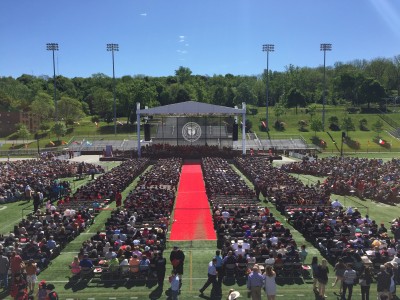