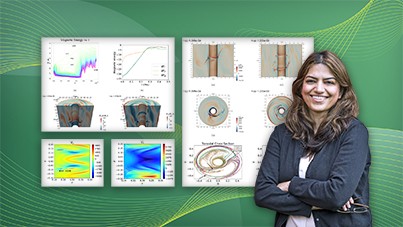 Newswise — Researchers at the U.S. Department of Energy’s (DOE) Princeton Plasma Physics Laboratory (PPPL) have uncovered a process in the swirling masses of plasma surrounding black holes and neutron stars that can cause previously unexplained emissions of light and heat. The process, known as magnetic reconnection, also jettisons huge plumes of plasma billions of miles in length. These findings can increase basic understanding of fundamental astrophysical processes throughout the universe.

Plasma, known as the fourth state of matter, comprises free-floating electrons and atomic nuclei, or ions, and makes up 99 percent of the visible universe. In addition to studying the astrophysical properties of plasma, scientists are exploring how to confine it within doughnut-shaped devices known as tokamaks to harness fusion reactions that produce the vast energy of the sun and stars. Replicating fusion on Earth could provide a virtually inexhaustible supply of power to generate electricity.

Reconnection occurs when magnetic field lines snap apart and reattach, releasing energy. The process interests scientists because it seems to happen throughout the universe, from plasma masses spanning light years to tabletop experiments in laboratories.

The researchers used a new model plus previously gathered data to find that a wiggling in the plasma known as the magnetorotational instability (MRI) forces magnetic fields together. The resulting reconnection within the accretion disks releases the observed heat and light.

“These accretion disk reconnection processes are something new in the plasma physics world,” said PPPL physicist Fatima Ebrahimi, co-author of a paper reporting the results in The Astrophysical Journal Letters. “The numerical data has been sitting there for a long time and we finally made sense of it!”

The new computer simulations showed plasma in greater detail than before. Other models only simulate small portions of the plasma known as shearing boxes and assume that the findings apply to the rest of the plasma. “Shearing boxes provide guidance, but they aren’t the whole story,” Ebrahimi stressed.

Such boxes do not show all of the plasma behavior during reconnection. The higher-fidelity simulation used in this research, on the other hand, revealed more of the in-between steps.

Lead author of the paper was Jarrett Rosenberg, a senior at the Rensselaer Polytechnic Institute (RPI) majoring in physics who in the spring of 2021 participated in the DOE’s Student Undergraduate Laboratory Internship (SULI) at PPPL. For Rosenberg, the experiments were a type of research crucible. “This was very much new ground for me,” Rosenberg said. “I hadn’t studied plasma physics in school and never written a research paper. But I was excited to dip my toe into this world.”

In the future, Ebrahimi plans to explore how the MRI affects accretion disk turbulence, disturbances in the plasma that can affect how heat, light, and motion propagate throughout the disk. “We hope to run larger simulations and get a better understanding of what exactly is happening at each step,” Ebrahimi said. “That way, you learn new physics, and when more complicated things happen later on, you know why!”