AUDIO: Ethan Crumlin, a scientist at Berkeley Lab’s Advanced Light Source, talks about the importance of interfaces in chemistry: the interaction between liquids or gases with the surface of solids. 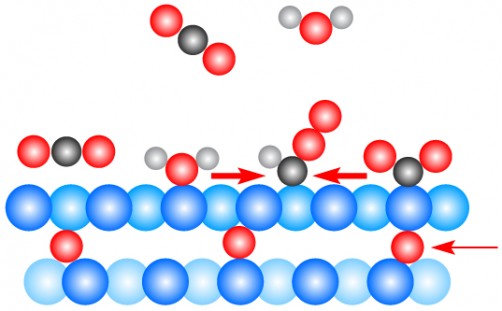 In this atomic-scale illustration, trace amounts of oxygen (red) just beneath a copper (blue) surface, play a key role in driving a catalytic reaction in which carbon dioxide (black and red molecules) and water (red and white molecules) interact in the beginning stages of forming ethanol. Carbon dioxide molecules hover at the copper surface and then bend to accept hydrogen atoms from the water molecules. X-ray experiments at Berkeley Lab’s Advanced Light Source helped researchers to understand the role of subsurface oxygen in this process. 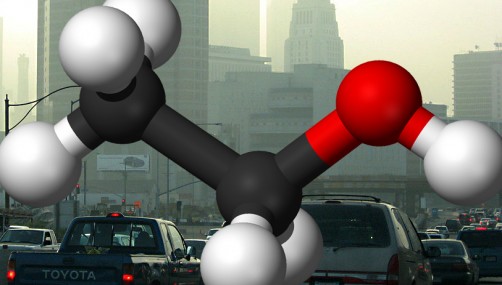 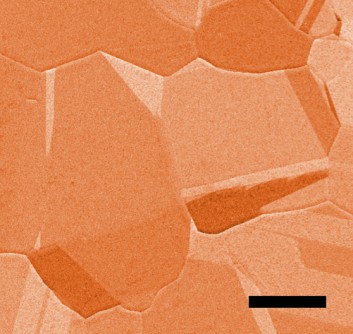 This false-color scanning electron microscopy image shows microscopic details on the surface of a copper foil that was used as a catalyst in a chemical reaction studied at Berkeley Lab’s Advanced Light Source. The scale bar represents 50 microns, or millionths of a meter.

Newswise — While using X-rays to study the early stages of a chemical process that can reformulate carbon dioxide into more useful compounds, including liquid fuels, researchers were surprised when the experiment taught them something new about what drives this reaction.

An X-ray technique at the Department of Energy’s Lawrence Berkeley National Laboratory (Berkeley Lab), coupled with theoretical work by a team at the California Institute of Technology, Pasadena (Caltech), revealed how oxygen atoms embedded very near the surface of a copper sample had a more dramatic effect on the early stages of the reaction with carbon dioxide than earlier theories could account for.

This information could prove useful in designing new types of materials to further enhance reactions and make them more efficient in converting carbon dioxide into other products. Large concentrations of carbon dioxide are harmful to health and the environment, so researchers have been pursuing ways to remove it from the atmosphere and safely store it or chemically convert it into more beneficial forms.

To explain what was at work, the research team developed computer models, and revised existing theories to explain what they were witnessing in experiments. Their results were published online June 12 in the Proceedings of the National Academy of Sciences journal.

“We found more than we thought we were going to find from this fundamental investigation,” said Ethan Crumlin, a scientist at Berkeley Lab’s Advanced Light Source (ALS) who co-led the study with Joint Center for Artificial Photosynthesis (JCAP) researchers Junko Yano, at Berkeley Lab, and William Goddard III, at Caltech.

The ALS is an X-ray research facility known as a synchrotron that has dozens of experimental beam lines for exploring a wide range of microscopic properties in matter, and JCAP is focused on how to convert carbon dioxide, water, and sunlight into renewable fuels.

“Having oxygen atoms just beneath the surface -- a suboxide layer -- is a critical aspect to this,” Crumlin said. The X-ray work brought new clarity in determining the right amount of this subsurface oxygen -- and its role in interactions with carbon dioxide gas and water -- to improve the reaction.

“Understanding this suboxide layer, and the suboxide in contact with water, is integral in how water interacts with carbon dioxide” in this type of reaction, he added.

Goddard and his colleagues at Caltech worked closely with Berkeley Lab researchers to develop and refine a quantum mechanics theory that fit the X-ray observations and explained the electronic structure of the molecules in the reaction.

“This was a good looping, iterative process,” Crumlin said. “Just being curious and not settling for a simple answer paid off. It all started coming together as a cohesive story.”

Goddard said, “This back-and forth between theory and experiment is an exciting aspect of modern research and an important part of the JCAP strategy to making fuels from carbon dioxide.” The Caltech team used computers to help understand how electrons and atoms rearrange themselves in the reaction.

At Berkeley Lab’s ALS, researchers enlisted an X-ray technique known as APXPS (ambient pressure X-ray photoelectron spectroscopy as they exposed a thin foil sheet of a specially treated copper -- known as Cu(111) -- to carbon dioxide gas and added water at room temperature. In proceeding experiments they heated the sample slightly in oxygen to vary the concentration of embedded oxygen in the foil, and used X-rays to probe the early stages of how carbon dioxide and water synergistically react with different amounts of subsurface oxide at the surface of the copper.

The X-ray studies, planned and performed by Marco Favaro, the lead author of the study, revealed how carbon dioxide molecules collide with the surface of the copper, then hover above it in a weakly bound state. Interactions with water molecules serve to bend the carbon dioxide molecules in a way that allows them to strip hydrogen atoms away from the water molecules. This process eventually forms ethanol, a type of liquid fuel.

“The modest amount of subsurface oxygen helps to generate a mixture of metallic and charged copper that can facilitate the interaction with carbon dioxide and promote further reactions when in the presence of water,” Crumlin said.

Copper has some shortcomings as a catalyst, Yano noted, and it is currently difficult to control the final product a given catalyst will generate.

“If we know what the surface is doing, and what the model is for this chemical interaction, then there is a way to mimic this and improve it,” Yano said. The ongoing work may also help to predict the final output of a given catalyst in a reaction. “We know that copper works -- what about different copper surfaces, copper alloys, or different types of metals and alloys?”

Researchers from Berkeley Lab’s Chemical Sciences Division and Molecular Biophysics and Integrated Bioimaging Division also participated in this study. The work was supported, in part, by the DOE Office of Basic Energy Science (BES) through the Joint Center for Artificial Photosynthesis (JCAP), a DOE Energy Innovation Hub. 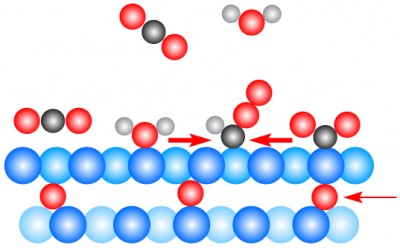 Caption: In this atomic-scale illustration, trace amounts of oxygen (red) just beneath a copper (blue) surface, play a key role in driving a catalytic reaction in which carbon dioxide (black and red molecules) and water (red and white molecules) interact in the beginning stages of forming ethanol. Carbon dioxide molecules hover at the copper surface and then bend to accept hydrogen atoms from the water molecules. X-ray experiments at Berkeley Lab’s Advanced Light Source helped researchers to understand the role of subsurface oxygen in this process. 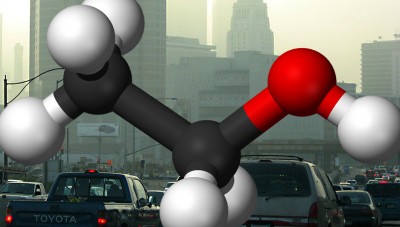 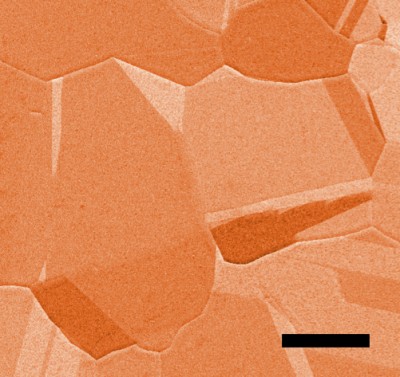 Caption: This false-color scanning electron microscopy image shows microscopic details on the surface of a copper foil that was used as a catalyst in a chemical reaction studied at Berkeley Lab’s Advanced Light Source. The scale bar represents 50 microns, or millionths of a meter.

Proceedings of the National Academy of Science, June 12, 2017