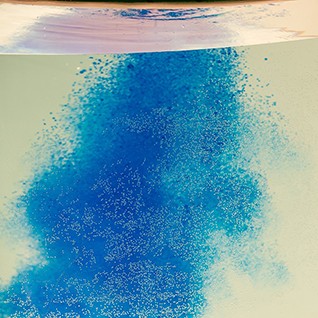 The Oleo Sponge developed by scientists at Argonne National Laboratory, including the Center for Nanoscale Materials, can pick up oil dispersed into the water column, not just a slick sitting on the surface — a property no commercially available product has.

A new foam called the Oleo Sponge was invented that not only easily adsorbs oil from water but is also reusable and can pull dispersed oil from an entire water column, not just the surface. Many materials can grab oil, but there hasn’t been a way, until now, to permanently bind them into a useful structure. The scientists developed a technique to create a thin layer of metal oxide “primer” within the interior surfaces of polyurethane foam. Scientists then bound oil-loving molecules to the primer. The resulting block of foam can be wrung out to be used, and the oil itself recovered.

At tests in New Jersey’s Ohmsett — The National Oil Spill Response Research & Renewable Energy Test Facility giant seawater tank, the Oleo Sponge successfully collected diesel fuel and crude oil from both below and on the water surface. Even after hundreds of wring and reuse cycles, the scientists have yet to observe any breakdown of the foam. The technique itself is quite flexible and can be adapted to other types of cleanup by attaching different molecules to target specific substances.

The Exxon Valdez, Deepwater Horizon, and other events highlight the devastating effects of uncontrolled releases of petroleum into oceans and other bodies of water. Scientists developed the means to modify the surface chemistry of common polymer foams, such as polyurethane or polyimide, to tailor their ability to separate fluids. They did an initial demonstration relevant to oil spill mitigation. Using sequential infiltration synthesis, they first penetrated the foam’s fiber struts with metal oxide. The oxide serves as an anchor for a subsequent reaction called silanization, a common molecular surface modifier containing silicon, to securely bind the desired molecular species. The researchers selected a molecule that is highly oleophilic, or oil loving, and hydrophobic, or water hating. The resulting foam sponge can selectively adsorb oil from water — both on the surface and as a dispersion of microscopic oil droplets within the water. The sorbent can then be compressed to recover the sorbed oil, and the sponge can be reused.

This work was funded by the U.S. Coast Guard, operating under contract HSCG32-15-X-R00006, with support from the Bureau of Safety and Environmental Enforcement. Use of the Center for Nanoscale Materials was supported by the U.S. Department of Energy, Office of Science, Office of Basic Energy Sciences, under contract DE-AC02-06CH11357.