Findings could rewrite textbooks about molecular structure for solvent ubiquitous in chemistry and biology. 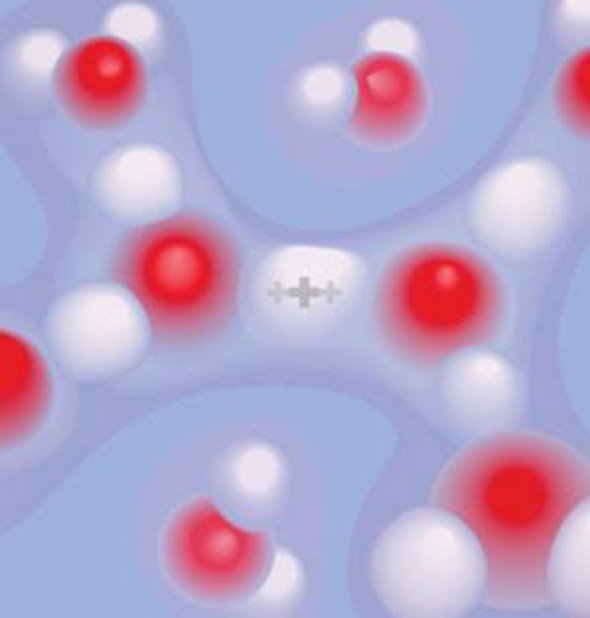 When you mix water and acid, the acid dissociates into two parts. One part, the proton, was the subject of a recent study. Scientists discovered that the proton (+) is strongly bound between two water molecules (red and white structures). This structure contradicts textbook explanations of the transient molecular structure around protons in water. The new structure could be important in any process where water plays a role, ranging from charge transport in living organisms to industrially relevant reactions in solution.

General chemistry textbooks teach that when acids (such as HCl) dissociate in water, the resulting proton associates with water as a hydronium ion (H3O+). It’s a fundamental reaction. Using the latest ultrafast spectroscopy tools, researchers found that the proton is actually bound strongly between two water molecules. They also found that many structural variations are possible, and the structures persist longer than previously thought.

Water is a ubiquitous solvent. It’s present in biological organisms and industrial processes. Discoveries about the molecular structure of water during aqueous chemical reactions could have a broad impact. Examples range from our microscopic understanding of cellular respiration to energy storage and production. The problem is that the structures in solution are very complex, and the speed of structural changes is often too fast to measure. Researchers used a new ultrafast experimental approach to verify the path of protons in water.

Water is the universal solvent, important in biology, geology, and industrial processes. For some time, computational simulations suggested that aqueous protons didn’t behave as described in general chemistry textbooks. But the protons were tough to study. They associate strongly with water molecules and structurally diffuse at rates that were too fast to follow in real time. Researchers took ultrafast snapshots of protons using 2-D vibrational spectroscopy. The technique was based on a new source of infrared light with bursts of energy only 50 femtoseconds in duration. The bursts occurred across an unusually wide region of the infrared spectrum, allowing many molecular structures to be observed instantly in water. Analyses of the data showed protons strongly bond to two waters in a fluctuating complex. There was no sign of the textbook hydronium ion (H3O+). Instead, measurements were consistent with a protonated water complex: the “Zundel-like” H5O2+. The data will benefit future computational models of transient water structure. Because of the critical role of the aqueous excess proton in redox chemistry, the data could also be important to a range of industrial reactions, including those in energy storage and production of fuels from water.

The Chemical Sciences, Geosciences, and Biosciences Division, Office of Basic Energy Sciences, Office of Science, Department of Energy funded this research. J.A.F. thanks the Arnold O. Beckman Foundation for support through a postdoctoral fellowship. N.H.C.L. acknowledges support from the Yen Fellowship programme.