Rules Are Only Suggestions in Heavy Elements

The arrangement of electrons in an exotic human-made element shows that certain properties of heavy elements cannot be predicted using lighter ones. 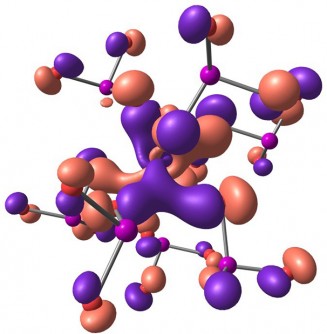 Image courtesy of Journal of the American Chemical Society

The application of Hund’s First Rule to berkelium(IV) leads to the expectation of an even distribution of parallel electrons (purple and peach) in each of the orbital subshells. This rule assumes that electron-electron repulsion is much larger than spin-orbit coupling. This rule does not hold true in heavy elements and a large deviation from the rule is observed in berkelium(IV) iodate.

The rules that are taught for predicting the arrangement of electrons in light elements do not apply well to heavy elements. Why? Because relativistic effects are much larger in an element such as berkelium than in carbon or iron. Relativistic effects follow from Einstein’s theory of relativity; it states the faster something with mass moves, the heavier it gets. Berkelium’s nucleus causes its electrons to move at significant fractions of the speed of light due to its massive positive charge. The speeding electrons gain mass, and the rules that typically apply to electron behavior break. This means that the chemical and physical properties of heavy elements cannot be predicted using lighter ones even if they have the same number of outer electrons (for example, gadolinium(III) vs curium(III) vs berkelium(IV)).

The safe use of nuclear power and environmental remediation of the Cold War legacy waste requires a deep understanding of the elements most involved in these processes, such as uranium and plutonium. Understanding how relativity changes the chemical properties of these elements may lead to improved recycling of used nuclear fuel. It could also lead to acceleration of the clean-up of nuclear sites in the United States.

The synthesis and characterization of two berkelium compounds creates rare opportunities to probe the electronic structure of some of the last elements that can be prepared on a macroscopic scale. Examination of the structure and properties of berkelium(III) and berkelium(IV) iodate, using both experiment and theory show, several unanticipated results that include shorter than expected berkelium-oxygen bonds and reduced magnetic moments. Theoretical examination of the ground states of these ions shows that they deviate from the spin-orbit coupling normally seen, and that the ground states are mixtures of electronic states instead of being just one. This admixture is created by large spin-orbit coupling that is consequence of the enhanced relativistic effects in heavy elements.

This work was supported by the U.S. Department of Energy (DOE), Office of Science, Office of Basic Energy Sciences, Heavy Element Chemistry program under awards DE-FG02-13ER16414 (Florida State University), DE-SC0001136 (F.G., J.A.), and DE-FG02-04ER15523 (G.E.S). G.E.S. is a Welch Foundation Chair (grant C-0036). The isotopes used in this research were purchased from the National Isotope Development Center (NIDC) that is funded by the DOE Office of Science, Office of Nuclear Physics, Isotope Development & Production for Research and Applications (IDPRA). Magnetization measurements were performed at the National High Magnetic Field Laboratory, which is supported by National Science Foundation Cooperative Agreement DMR-1157490, the State of Florida, and DOE. This research is supported in part by an appointment to the DOE Carlsbad Field Office Fellowship Program (M.A.S.) and a National Science Foundation Graduate Research Fellowship under award DGE-1449440 (J.W.). The team used resources at the High Flux Isotope Reactor, a DOE scientific user facility at Oak Ridge National Laboratory.