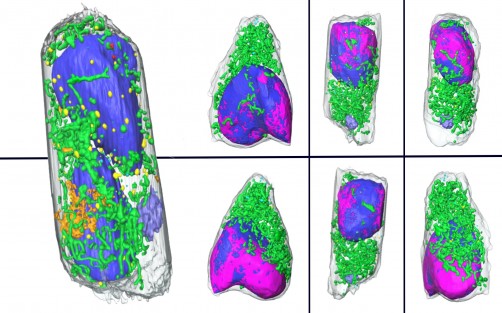 Newswise — To combat a pandemic, science needs to move quickly. With safe and effective vaccines now widely available and a handful of promising COVID-19 treatments coming soon, there’s no doubt that many aspects of biological research have been successfully accelerated in the past two years.

Their approach takes mere minutes to gather data that would require weeks of prep and analysis with other methods, giving scientists an easy way to quickly examine how our cells’ internal machinery responds to SARS-CoV-2, or other pathogens, as well as how the cells respond to drugs designed to treat the infection.

“Prior to our imaging technique, if one wanted to know what was going on inside a cell, and to learn what changes had occurred upon an infection, they'd have to go through the process of fixing, slicing, and staining the cells in order to analyze them by electron microscopy. With all the steps involved, it would take weeks to get the answer. We can do it in a day,” said project co-lead Carolyn Larabell, a Berkeley Lab faculty scientist in the Biosciences Area. “So, it really speeds up the process of examining cells, the consequences to infection, and the consequences of treating a patient with a drug that may or may not cure or prevent the disease.”

Larabell is a professor of anatomy at UC San Francisco and director of the National Center for X-Ray Tomography, a facility based at Berkeley Lab’s Advanced Light Source (ALS). The facility’s staff developed soft X-ray tomography (SXT) in the early 2000s to fill in the gaps left by other cellular imaging techniques. They currently offer the SXT to investigators worldwide and continue to refine the approach. As part of a study published in Cell Reports Methods late last year, she and three colleagues performed SXT on human lung cell samples prepared by their colleagues at Heidelberg University and the German Center for Infection Research.

Led by virologist Ralf Bartenschlager and physicist Venera Weinhardt, the German team carefully infected the cells with SARS-CoV-2 then chemically fixed them with aldehyde-based compounds – a process that kills cells and preserves them, immobilized, in their last living state (and also inactivates any remaining viral particles) – at 6 and 24 hours post-infection.

The entire team was jubilant when the resulting 3D images had the same level of exquisite detail and clarity that SXT is known for, despite the chemical fixation done to the cells. The takeaway is that their approach will allow many labs to safely image infected cells without the inherent risks – and corresponding required safety protocols – of working with live infected cells.

“This is a really important point because there's a lot of dangerous organisms that people can't study because not everybody has a BSL-3 (Biosafety Level 3) lab,” Larabell explained. “Nobody at Berkeley Lab, for example, is able to have those cells growing in their lab. So, it opens up the doors to a lot of experiments on pathogens that we couldn't image before.”

Jian-Hua Chen and Valentina Loconte, scientists in Larabell’s group, conducted the tomography sessions and image analysis, respectively, at the National Center for X-Ray Tomography. Both were pleasantly surprised to see how SXT captured changes to different organelles within the lung cells at very high resolution after very little time spent on sample preparation and without use of stains or labeling. These additional steps are often needed to generate cell maps wherein the different internal components are easily distinguishable.

“One detail that hit me was the presence of this large membrane compartment that is probably the way the cell tries to recycle or remove all of the viral reproductive machineries,” said Loconte, a postdoctoral researcher. She noted that the images showed the development of this peculiar compartment in nearly all the infected cells they studied. “It was highlighted really clearly by our technique. If we were using transmission electron microscopy (TEM), for instance, it would have taken so much longer to track a single organelle like this,” because scientists using TEM have to slice the cells, analyze each particular slice independently, and then reconstruct the area, she said.

Now that they’ve demonstrated the potential of using whole-cell SXT to safely image virus-infected cells, the authors believe that their findings will help the global scientific community study COVID-19 and potentially other diseases.

Meanwhile, Larabell, Weinhardt, and Bartenschlager are already putting the technique to good use. As part of his role at the German Center for Infection Research,  Bartenschlager and his team have begun using whole-cell SXT to examine how human cells respond to several experimental COVID-19-treating drugs. They hope the rapid turnaround for results will help expedite the drug development process, getting additional effective treatments on the market sooner. They also plan to use the technology to understand the progress of infections caused by other viral agents.

"Being microscopists, we often say ‘seeing is believing.’ However, there are still a lot of unknowns for us to explore to get a better understanding of the complexities of virus-host interactions. This will require imaging large numbers of cells to obtain statistically significant information, given the variations between infected cells that we observed,” said Chen. “SXT offers the community a very good chance to observe and investigate what happens after human cells have been infected by viruses. I'm hoping this will open a window to answer critical questions in the field of virology."