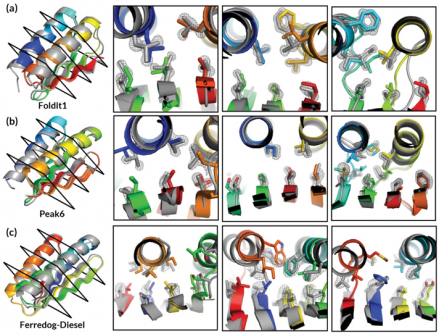 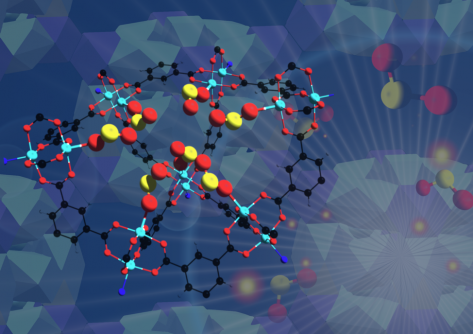 Illustration of sulfur dioxide captured within the MFM-170 material, as revealed by experiments at Berkeley Lab’s Advanced Light Source.

A visualization of the zero-energy electronic states – also known as a “Fermi surface” – from the kagome material studied by MIT’s Riccardo Comin and colleagues. The specific kagome material explored in the current work is made of only three elements (cesium, vanadium, and antimony) and has the chemical formula CsV3Sb5.

Newswise — The unique ways in which proteins fold dictate their interplay with diseases and medicines, so understanding their twists and turns is key to designing effective drugs.

While new drug design is serious work, discovering how proteins fold can be fun, too: A crowdsourcing game called Foldit allows players to try different fold configurations for points and rankings. In a recent challenge, Foldit players came up with 56 designs that were reproduced as stable structures in a lab.

These players had little or no training in this field, though their models proved to be as realistic as those created by experts and sophisticated computer programs. Their successes were highlighted in a scientific letter published in the journal Nature.

Now, the University of Washington researchers behind Foldit hope to introduce new challenges that could lead players to design actual drugs that work better than those now available. These efforts could benefit the growing field of biopharmaceuticals in which copies of existing proteins and modified versions of them are used to combat cancer and other diseases.

“Now that we’ve seen gamers can accurately design folded proteins, we’d like to challenge the gamers with more difficult design problems,” said Brian Koepnick, a research scientist at the University of Washington and Foldit developer.

Perfectly Raw or Cooked to Perfection? How Food Preparation Affects the Gut Microbiome

The gut microbiome undergoes rapid and dramatic changes in species composition and gene expression when the host switches between eating cooked or raw vegetables, according to a team of scientists led by UC San Francisco and Harvard University. Their new study, published in Nature Microbiology, is the first to investigate how this aspect of diet affects the microbiome, and included experiments in both mice and humans.

The scientists also observed that mice lost weight during their stint eating raw vegetables (groups of animals were fed cooked and raw sweet potato, white potato, corn, peas, carrots, and beets), but when the microbiomes of these newly svelte mice were transplanted into other mice, the new hosts gained weight – an unexpected result that exemplifies how the interplay of gut microbes and host metabolism is complex, and requires further study. Interestingly, other experiments within the study showed that gut microbiomes change very little when switching from cooked and raw meat, although past research has revealed that cooking affects the nutrients and bioactive compounds in meat.

“‘Raw’ diets are becoming an increasingly popular dietary trend for certain health benefits as compared to a traditional diet with cooked food, and the differences in microbiome and metabolism demonstrated in this paper begin to shed light on some of the potential underlying mechanisms,” said co-author Katherine Louie, a scientist in Berkeley Lab’s Biosciences Area. Louie, alongside three other Berkeley Lab contributors, performed molecular analyses to determine how cooking affects the metabolites and phytochemicals present in vegetables and tubers.

An international team has developed a robust material that can selectively take in toxic sulfur dioxide gas at record concentrations and preserve it for use in chemical production. The researchers verified its performance using a combination of techniques that included X-ray experiments at Lawrence Berkeley National Laboratory’s (Berkeley Lab’s) Advanced Light Source (ALS).

Sulfur dioxide emissions are typically produced by power plants, other industrial facilities, and trains, ships, and heavy equipment, and can be harmful to human health and the environment. The team developed porous, cagelike, stable copper-containing molecules known as metal-organic frameworks or MOFs that are designed to separate sulfur dioxide (SO2) gas from other gases. The team exposed the MOF material, dubbed MFM-170, to simulated exhaust gases and found that it efficiently separated out SO2 from the gas mixture at elevated temperatures even in the presence of water.

Existing techniques to remove SO2 from pollution streams can produce a lot of solid and liquid waste and may only remove 60-95% of the toxic gas, researchers noted, while the MOF has been shown to eliminate SO2 down to a level below 0.1 parts per million – or 99.99999% SO2-free. Their study was published Oct. 14 in the journal Nature Materials.

The team, led by University of Manchester scientists, used X-rays produced at the ALS to explore the detailed molecular structure of the MOF crystals. They also performed experiments at Oak Ridge National Laboratory; Diamond Light Source, ISIS Neutron and Muon Source, and Manchester University in the U.K. 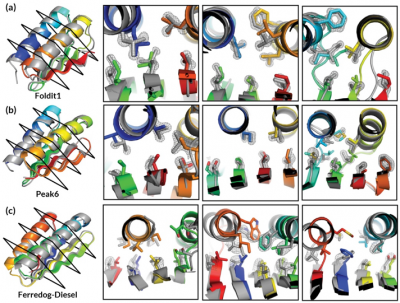 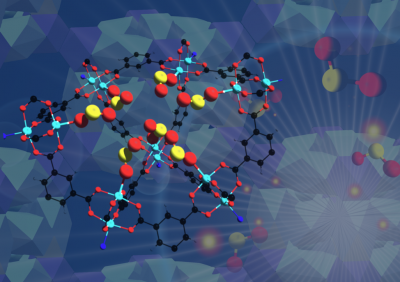 Caption: Illustration of sulfur dioxide captured within the MFM-170 material, as revealed by experiments at Berkeley Lab’s Advanced Light Source.

Caption: A visualization of the zero-energy electronic states – also known as a “Fermi surface” – from the kagome material studied by MIT’s Riccardo Comin and colleagues. The specific kagome material explored in the current work is made of only three elements (cesium, vanadium, and antimony) and has the chemical formula CsV3Sb5.