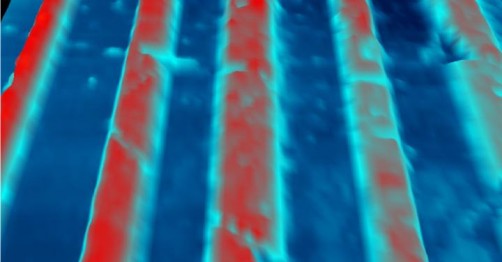 Near-field scanning microscope image of nanocircuits “written” into a 2D device made of boron nitride and graphene.

A research team led by Alex Zettl, senior faculty scientist in Berkeley Lab’s Materials Sciences Division and professor of physics at UC Berkeley, has developed a new technique for fabricating tiny circuits from ultrathin materials for next-generation electronics, such as rewritable, low-power memory circuits. Their findings were reported in the journal Nature Electronics.

Using the nanofabrication facility at the Molecular Foundry, the researchers prepared two different 2D devices known as van der Waals heterostructures: one by sandwiching graphene between two layers of boron nitride; and another by sandwiching molybdenum disulfide.

When applying a fine electron beam to the boron-nitride “sandwiches,” the researchers demonstrated that they can “write” nanoscale conducting channels, or nanocircuits, into the core “active” layer by controlling the intensity of electron beam exposure while properly controlling a back-gate electric field.

When written into the graphene or molybdenum disulfide layer, these nanocircuits allow high densities of electrons, or quasiparticles called holes, to accumulate and move through the semiconductor along narrow predetermined tracks at ultrahigh speeds with few collisions – like cars racing through a freeway within inches of each other without crashing or stalling.

The researchers also found that reapplying the electron beam with a special back-gate to the 2D materials can erase nanocircuits that have already been written – or write additional or different circuits in the same device, which suggests that the technique has great potential for next-generation reconfigurable 2D electronics.

Importantly, the researchers demonstrated that the material’s conducting states and ultrahigh electronic mobility persists even after the electron beam and the back-gate have been removed. This finding is critical to many applications, including energy-efficient nonvolatile memory devices that do not require constant power to retain data, said lead author Wu Shi, a project scientist in Berkeley Lab’s Materials Sciences Division and the Zettl Lab at UC Berkeley.

Plants can produce a wide range of molecules, many of which help them fight off harmful pests and pathogens. Biologists have harnessed this ability to produce many molecules important for human health — aspirin and the antimalarial drug artemisinin, for example, are derived from plants.

Now, scientists at the Joint BioEnergy Institute (JBEI) are using synthetic biology to give plants the ability to create molecules never seen before in nature. New research led by Patrick Shih, director of Plant Biosystems Design at JBEI, and Beth Sattely of Stanford University describes success in swapping enzymes between plants to engineer new synthetic metabolic pathways. These pathways gave plants the ability to create new classes of chemical compounds, some of which have enhanced properties.

“This is a demonstration of how we can begin to start rewiring and redesigning plant metabolism to make molecules of interest for a range of applications,” Shih said.

Engineering plants to make new molecules themselves provides a sustainable platform to produce a wide range of compounds. One of the compounds the researchers were able to create is comparable to commercially used pesticides in their effectiveness, while others may have anti-cancer properties. The long-term goal is to engineer plants to be biofactories of molecules such as these, bypassing the need to externally spray pesticides or synthesize therapeutic molecules in a lab.

“That’s the motivation for where we could go,” Shih said. “We want to push the boundaries of plant metabolism to make compounds we’ve never seen before.”

JBEI is a DOE Bioenergy Research Center supported by DOE’s Office of Science.

Researchers at Berkeley Lab have transformed lignin, a waste product of the paper industry, into a precursor for a useful chemical with a wide range of potential applications.

Lignin is a complex material found in plant cell walls that is notoriously difficult to break down and turn into something useful. Typically, lignin is burned for energy, but scientists are focusing on ways to repurpose it.

In a recent study, researchers demonstrated their ability to convert lignin into a chemical compound that is a building block of bio-based ionic liquids. The research was a collaboration between the Advanced Biofuels and Bioproducts Process Development Unit, the Joint BioEnergy Institute (both established by the Department of Energy and based at Berkeley Lab), and the Queens University of Charlotte.

Ionic liquids are powerful solvents/catalysts used in many important industrial processes, including the production of sustainable biofuels and biopolymers. However, traditional ionic liquids are petroleum-based and costly. Bio-based ionic liquids made with lignin, an inexpensive organic waste product, would be cheaper and more environmentally friendly.

“This research brings us one step closer to creating bio-based ionic liquids,” said Ning Sun, the study’s co-corresponding author. “Now we just need to optimize and scale up the technology.”

This research was funded by DOE’s Bioenergy Technologies Office through the Technology Commercialization Fund.

Vaccines, which help the body recognize infectious microorganisms and stage a stronger and faster response, are made up of proteins that are specific to each type of microorganism. In the case of a virus, viral proteins – or antigens – can sometimes be attached to a protein scaffold to help mimic the shape of the virus and elicit a stronger immune response. Using scaffolds to approximate the natural configuration of the antigen is an emerging approach to vaccine design.

A team of scientists led by David Baker at the University of Washington developed a method to design artificial proteins to serve as a framework for the viral antigens. Their study was published recently in the journal eLife. Berkeley Lab scientists collected data at the Advanced Light Source to visualize the atomic structure and determine the dynamics of the designed scaffolds.

“When bound, the scaffolds assume predicted geometries, which more closely approximate the virus shape and thereby maximize the immune response,” said Banu Sankaran, a research scientist in the Molecular Biophysics and Integrated Bioimaging (MBIB) Division. “It was exciting to collaborate on this method to predictably design frameworks, which could lead to more effective vaccines, especially for viruses that we don’t have a scaffold for.”

The Advanced Light Source is a DOE Office of Science user facility.