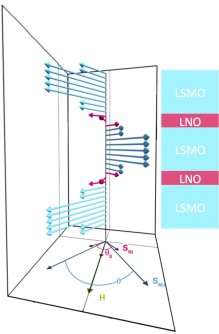 A diagram showing the “spiral” of noncollinear magnetic orientations (in pink) of a nickelate material next to a manganite material.

Newswise — Like a group of undecided voters, certain materials can be swayed by their neighbors to become magnetic, according to a new study from the U.S. Department of Energy’s (DOE) Argonne National Laboratory.

A team of Argonne researchers led by materials scientist Anand Bhattacharya examined the relationship at interfaces between layers of nonmagnetic nickel-based nickelate material and a ferromagnetic manganese-based manganite. The samples were grown with single atomic layer precision using molecular beam epitaxy at Argonne’s Center for Nanoscale Materials, a DOE Office of Science User Facility, by postdoctoral researcher and first author on the study Jason Hoffman.

The researchers found that as electrons flowed out of the manganite into the neighboring nickelate, the non-magnetic nickelate suddenly became magnetic – but not in a typical way. While most magnetic materials are “collinear”, meaning that the magnetic orientations of the electrons in the materials are arranged either in the same or opposite directions – that is, what we think of as “north” or “south” – this was not the case for the affected nickelate. As the electrons flowed into the nickelate, it created a magnetization with a twisting pattern as in a helix.

Although it is nonmagnetic on its own, the nickelate has certain proclivities that make it a good candidate for being “willing to be swayed,” Bhattacharya said.

According to Bhattacharya, magnetic noncollinearity is difficult to tailor in the laboratory. “This noncollinear twisty magnetism is shown by only a very few types of materials and is quite rare in nature,” said Bhattacharya. “It’s an exciting property to have in a material because you could conceivably use the different magnetic orientations to encode data in a novel kind of magnetic memory, or to nucleate new kinds of superconducting states that might be useful in a quantum computer.”

An article based on the research, “Oscillatory Noncollinear Magnetism Induced by Interfacial Charge Transfer in Superlattices Composed of Metallic Oxides,” appeared in Physical Review X in November. The Argonne research was funded by DOE's Office of Science. Additional components of the research were performed at the National Institutes of Standards and Technology.