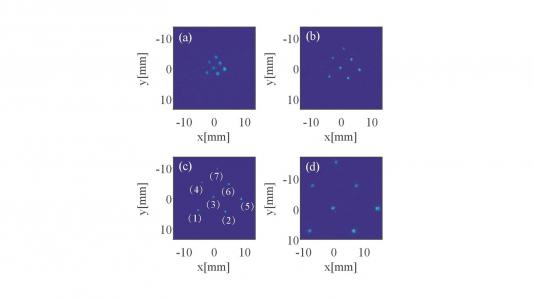 Beam images as a function of solenoid strength.

Newswise — For a wide variety of high-powered scientific instruments, from free-electron lasers to wakefield accelerators to ultrafast electron diffraction, generating a bright electron beam that has specific properties represents one of the most significant challenges. These instruments can be used for investigating the atomic level properties of matter or for accelerating particles to high energies.

Scientists seeking to create the best beams possible are interested in two particular qualities that determine how well the photocathodes that generate beams work — their quantum efficiency and their intrinsic emittance.

“The pattern dramatically reduces the time it takes to do our measurements of the entire cathode surface, because instead of having to go step by step we can sample different regions at the same time.” — Argonne physicist Jiahang Shao

Quantum efficiency measures the ratio of the number of produced photoelectrons to the photons that strike the cathode. Intrinsic emittance, on the other hand, describes the beam divergence when electrons emit.

Scientists are most interested in cathodes that have high quantum efficiency and low intrinsic emittance. But that’s not all — they also want the quantum efficiency and intrinsic emittance to be constant across the entire cathode. “You can think of our cathode like a TV screen,” said accelerator physicist Jiahang Shao of the U.S. Department of Energy’s (DOE) Argonne National Laboratory. “Our cathode is made up of 'pixels,' and like on a TV screen you want each pixel to be of a similar brightness.”

In a new study from Argonne, researchers at the Argonne Wakefield Accelerator facility have found a new and faster way to simultaneously measure the distribution of quantum efficiency and intrinsic emittance of a photocathode, and have related the distributions to better understand the emission mechanism of cesium telluride cathodes, a principal type of photocathode.

Measuring the intrinsic emittance of each point on the cathode — essentially going pixel-by-pixel — is an extremely time-consuming process, Shao said. To speed things up, the researchers used a device called a microlens array to create multiple small beamlets that they could measure simultaneously, essentially creating a pattern instead of doing individual measurements.

“The pattern dramatically reduces the time it takes to do our measurements of the entire cathode surface, because instead of having to go step by step we can sample different regions at the same time,” Shao said.

Intrinsic emittance is one component of the measured total emittance, which contains growth factors due either to effects resulting from the clustering of electrons — called space charge — or other aberrations introduced as the beam propagates. Scientists seeking to understand the intrinsic emittance of the cathode itself have to somehow reduce these compounding effects. In this study, such effects were eliminated by careful simulation and experiment effort.

In studying the properties of the different beamlets, the researchers noticed that beamlets with higher quantum efficiency also tended to typically have higher intrinsic emittance, complicating efforts to design the best possible beams. “It seems that we are always going to have some kind of a trade-off between quantum efficiency and intrinsic emittance,” Shao said. “The question is how we balance the two.”

A paper based on the study, “Rapid thermal emittance and quantum efficiency mapping of a cesium telluride cathode in an rf photoinjector using multiple laser beamlets,” was published in the May 4 edition of Physical Review Accelerators and Beams. Other authors of the paper include Argonne’s Lianmin Zheng, Eric Wisniewski, John Power, Wanming Liu, Charles Whiteford, Manoel Conde, Scott Doran and Chunguang Jing. Yingchao Du and Chuanxiang Tang of China’s Tsinghua University-Beijing also contributed.

The Argonne work was funded by DOE’s Office of Science (Office of High Energy Physics).

Physical Review Accelerators and Beams, May 2020