Scientists Get First Glimpse of a Chemical Bond Being Born

Anders Nilsson, a professor at SLAC and at Stockholm University, explains how scientists used an X-ray laser to watch atoms form a tentative bond, and why that's important. 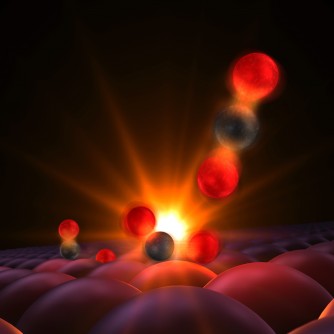 This illustration shows atoms forming a tentative bond, a moment captured for the first time in experiments with an X-ray laser at SLAC National Accelerator Laboratory. The reactants are a carbon monoxide molecule, left, made of a carbon atom (black) and an oxygen atom (red), and a single atom of oxygen, just to the right of it. They are attached to the surface of a ruthenium catalyst, which holds them close to each other so they can react more easily. When hit with an optical laser pulse, the reactants vibrate and bump into each other, and the carbon atom forms a transitional bond with the lone oxygen, center. The resulting carbon dioxide molecule detaches and floats away, upper right. The Linac Coherent Light Source (LCLS) X-ray laser probed the reaction as it proceeded and allowed the movie to be created.

Newswise — Menlo Park, Calif. — Scientists have used an X-ray laser at the Department of Energy’s SLAC National Accelerator Laboratory to get the first glimpse of the transition state where two atoms begin to form a weak bond on the way to becoming a molecule.

This fundamental advance, reported Feb. 12 in Science Express and long thought impossible, will have a profound impact on the understanding of how chemical reactions take place and on efforts to design reactions that generate energy, create new products and fertilize crops more efficiently. “This is the very core of all chemistry. It’s what we consider a Holy Grail, because it controls chemical reactivity,” said Anders Nilsson, a professor at the SLAC/Stanford SUNCAT Center for Interface Science and Catalysis and at Stockholm University who led the research. “But because so few molecules inhabit this transition state at any given moment, no one thought we’d ever be able to see it.”

Researchers used LCLS to study the same reaction that neutralizes carbon monoxide (CO) from carexhaust in a catalytic converter. The reaction takes place on the surface of a catalyst, which grabs CO and oxygen atoms and holds them next to each other so they pair up more easily to form carbon dioxide.

In the SLAC experiments, researchers attached CO and oxygen atoms to the surface of a ruthenium catalyst and got reactions going with a pulse from an optical laser. The pulse heated the catalyst to 2,000 kelvins – more than 3,000 degrees Fahrenheit – and set the attached chemicals vibrating, greatly increasing the chance that they would knock into each other and connect.

The team was able to observe this process with X-ray laser pulses from LCLS, which detected changes in the arrangement of the atoms’ electrons – subtle signs of bond formation – that occurred in mere femtoseconds, or quadrillionths of a second.

“First the oxygen atoms get activated, and a little later the carbon monoxide gets activated,” Nilsson said. “They start to vibrate, move around a little bit. Then, after about a trillionth of a second, they start to collide and form these transition states.”

The researchers were surprised to see so many of the reactants enter the transition state – and equally surprised to discover that only a small fraction of them go on to form stable carbon dioxide. The rest break apart again.

“It’s as if you are rolling marbles up a hill, and most of the marbles that make it to the top roll back down again,” Nilsson said. “What we are seeing is that many attempts are made, but very few reactions continue to the final product. We have a lot to do to understand in detail what we have seen here.”

Theory played a key role in the experiments, allowing the team to predict what would happen and get a good idea of what to look for. “This is a super-interesting avenue for theoretical chemists. It’s going to open up a completely new field,” said report co-author Frank Abild-Pedersen of SLAC and SUNCAT.

A team led by Associate Professor Henrik Öström at Stockholm University did initial studies of how to trigger the reactions with the optical laser. Theoretical spectra were computed under the leadership of Stockholm Professor Lars G.M. Pettersson, a longtime collaborator with Nilsson.

Preliminary experiments at SLAC’s Stanford Synchrotron Radiation Lightsource (SSRL), another DOE Office of Science User Facility, also proved crucial. Led by SSRL’s Hirohito Ogasawara and SUNCAT’s Jerry LaRue, they measured the characteristics of the chemical reactants with an intense X-ray beam so researchers would be sure to identify everything correctly at the LCLS, where beam time is much more scarce. “Without SSRL this would not have worked,” Nilsson said.

The team is already starting to measure transition states in other catalytic reactions that generate chemicals important to industry.

“This is extremely important, as it provides insight into the scientific basis for rules that allow us to design new catalysts,” said SUNCAT Director and co-author Jens Nørskov.

Researchers from LCLS, Helmholtz-Zentrum Berlin for Materials and Energy, University of Hamburg, Center for Free Electron Laser Science, University of Potsdam, Fritz-Haber Institute of the Max Planck Society, DESY and University of Liverpool also contributed to the research. The research was funded by the DOE Office of Science, the Swedish National Research Council, the Knut and Alice Wallenberg Foundation, the Volkswagen Foundation and the German Research Foundation (DFG) Center for Ultrafast Imaging.