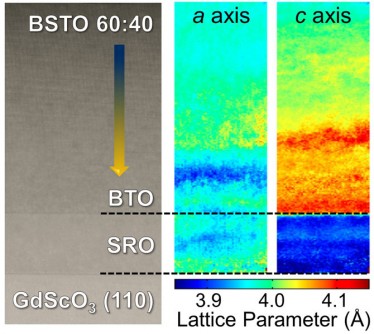 On the left is a low-resolution scanning transmission electron microscopy (STEM) image of a ferroelectric material that is continuously graded from barium strontium titanate (BSTO, top) to barium titanate (BTO, bottom). The material is grown on a gadolinium scandate (GSO) substrate buffered by a strontium ruthenate (SRO) bottom electrode. To the right are local nanobeam diffraction-based 2D maps of a-axis and c-axis lattice parameters that confirm large strain gradients in the ferroelectric material. The material is promising as electrically-tunable capacitors with extreme temperature stability.

Newswise — Scientists have greatly expanded the range of functional temperatures for ferroelectrics, a key material used in a variety of everyday applications, by creating the first-ever polarization gradient in a thin film.

The achievement, reported May 10 in Nature Communications by researchers at the Department of Energy's Lawrence Berkeley National Laboratory (Berkeley Lab), paves the way for developing devices capable of supporting wireless communications in extreme environments, from inside nuclear reactors to Earth’s polar regions.

Ferroelectric materials are prized for having a spontaneous polarization that is reversible by an applied electric field and for the ability to produce electric charges in response to physical pressure. They can function as capacitors, transducers, and oscillators, and they can be found in applications such as transit cards, ultrasound imaging, and push-button ignition systems.

Berkeley Lab scientists created a strain and chemical gradient in a 150-nanometer-thin film of barium strontium titanate, a widely used ferroelectric material. The researchers were able to directly measure the tiny atomic displacements in the material using cutting-edge advanced microscopy at Berkeley Lab, finding gradients in the polarization. The polarization varied from 0 to 35 microcoulombs per centimeter squared across the thickness of the thin-film material.

“Traditional physics and engineering textbooks wouldn’t have predicted this observation,” said study principal investigator Lane Martin, faculty scientist at Berkeley Lab’s Materials Sciences Division and UC Berkeley associate professor of materials and engineering. “Creating gradients in materials costs a lot of energy—Mother Nature doesn’t like them—and the material works to level out such imbalances in whatever way possible. In order for a large gradient like the one we have here to occur, we needed something else in the material to compensate for this unfavorable structure. In this case, the key is the material’s naturally occurring defects, such as charges and vacancies of atoms, that accommodate the imbalance and stabilize the gradient in polarization.”

Creating a polarization gradient had the beneficial effect of expanding the temperature range for optimal performance by the ferroelectric material. Barium titanate’s function is strongly temperature-dependent with relatively small effects near room temperature and a large, sharp peak in response at around 120 degrees Celsius. This makes it hard to achieve well-controlled, reliable function as the temperature varies beyond a rather narrow window. To adapt the material to work for applications at and around room temperature, engineers tune the chemistry of the material, but the range of temperatures where the materials are useful remains relatively narrow.

"The new polarization profile we have created gives rise to a nearly temperature-insensitive dielectric response, which is not common in ferroelectric materials," said Martin. "By making a gradient in the polarization, the ferroelectric simultaneously operates like a range or continuum of materials, giving us high-performance results across a 500-degree Celsius window. In comparison, standard, off-the-shelf materials today would give the same responses across a much smaller 50-degree Celsius window."

Beyond the obvious expansions to hotter and colder environments, the researchers noted that this wider temperature range could shrink the number of components needed in electronic devices and potentially reduce the power draw of wireless phones.

"The smartphone I'm holding in my hand right now has dielectric resonators, phase shifters, oscillators—more than 200 elements altogether—based on similar materials to what we studied in this paper," said Martin. “About 45 of those elements are needed to filter the signals coming to and from your cell phone to make sure you have a clear signal. That’s a huge amount of real estate to dedicate to one function.”

Because changes in temperature alter the resonance of the ferroelectric materials, there are constant adjustments being made to match the materials to the wavelength of the signals sent from cell towers. Power is needed to tune the signal, and the more out of tune it is, the more power the phone needs to use to get a clear signal for the caller. A material with a polarization gradient capable operating over large temperatures regimes could reduce the power needed to tune the signal.

Understanding the polarization gradient entailed the use of epitaxial strain, a strategy in which a crystalline overlayer is grown on a substrate, but with a mismatch in the lattice structure. This strain engineering technique, commonly employed in semiconductor manufacturing, helps control the structure and enhance performance in materials.

Recent advances in electron microscopy have allowed researchers to obtain atomic-scale structural data of the strained barium strontium titanate, and to directly measure the strain and polarization gradient.

"We have established a way to use nanobeam scanning diffraction to record diffraction patterns from each point, and afterwards analyze the datasets for strain and polarization data," said study co-author Andrew Minor, director of the National Center for Electron Microscopy at Berkeley Lab’s Molecular Foundry, a DOE Office of Science User Facility. "This type of mapping, pioneered at Berkeley Lab, is both new and very powerful."

Another key factor was the speed of the detector, Minor added. For this paper, data was obtained at a rate of 400 frames per second, an order of magnitude faster than the 30-frame-per-second rate from just a few years ago. This technique is now available for users at the Foundry.

"We're seeing a revolution in microscopy related to the use of direct electron detectors that is changing many fields of research," said Minor, who also holds an appointment as a UC Berkeley professor of materials science and engineering. "We're able to both see and measure things at a scale that was hard to imagine until recently."

Co-lead authors of the study are postdoctoral researcher Anoop Damodaran and graduate student Shishir Pandya at UC Berkeley's Department of Materials Science and Engineering. Other study co-authors include researchers from the University of Pennsylvania, the Carnegie Institution for Science, and Rutgers University.

This work included support from DOE's Office of Science, the Army Research Office, the National Science Foundation, the Gordon and Betty Moore Foundation and the Carnegie Institution for Science.