Scientists seek solar clues in a material with split nature 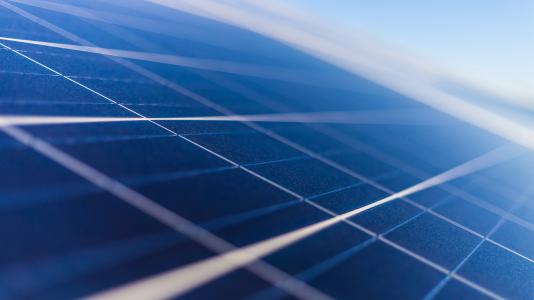 Argonne scientists have looked at the behavior of methylammonium lead iodide, which has intriguing properties for solar applications. The researchers examined how the methylammonium component of the compound transferred energy to the heavier lead iodide after it was excited with a laser pulse.

Scientists and engineers around the world are on the hunt for a new generation of highly efficient, low-cost and easy-to-process solar cells. To understand how materials for such solar cells can absorb light and convert it to electricity, researchers need to comprehend multidimensional physical processes at the atomic and electronic scales.

At the atomic level, methylammonium lead iodide has a somewhat atypical nature in that it is composed of two distinct substructures that interpenetrate each other at the nanometer level. The first, the organic methylammonium ion, has only light atoms and can vibrate at high energies. The second, lead iodide, is much heavier and vibrates only at low energies. Potential interactions of these dissimilar components has become a subject of debate and a potential source of favorable electronic properties.

In the experiment, the Argonne researchers used an infrared laser pulse to selectively excite only the methylammonium ions in the crystal lattice, then attempted to see how those atoms transferred their energy to the inorganic lead iodide.

“We were surprised to see that it took up to a nanosecond for the vibrational energy to move from one part of the lattice to the other,” said Argonne nanoscientist Richard Schaller. ​“While that might not seem like a long time with regard to timescales we experience every day, when it comes to atomic and lattice dynamics, that is a particularly slow process.”

Although the organic and inorganic molecules are very close to each other, the researchers noticed that the methylammonium molecules tended to stay ​“hot” for quite some time before transmitting their energy directly to the lead iodide sublattice. The finding shows pronounced non-equilibrium energy distributions in the material, Schaller said.

The vibrational behavior of the methylammonium molecules suggests that they may not play as significant a role in the overall performance of the material as scientists had previously thought, according to Argonne nanoscientist Maria Chan.

“It appears more likely that these organic molecules more or less serve as a kind of charge-balancing spacer material for the rest of the lattice to grow around,” Chan explained. ​“If we had seen a stronger coupling in the vibrational modes between the two materials, it would have suggested that the organic molecules play a larger role.”

As part of attempts to develop new classes of solar materials, scientists have taken organic-inorganic hybrid materials like methylammonium lead iodide and worked to either alter the organic component or replace it with a second inorganic component. ​“The inorganic components of these materials contribute strongly to their extraordinary properties,” said Argonne Enrico Fermi Named Postdoctoral Fellow Peijun Guo, the first author of the study.

In addition to the experimental excitation of the methylammonium lead iodide, the researchers performed computational simulations, using density functional theory, to examine the excited vibrational modes of the different molecules. ​“Essentially, we wanted to see how long it takes for the vibrational coupling to occur in this atypical material,” said Argonne postdoctoral researcher Arun Mannodi-Kanakkithodi. ​“The high-frequency organic mode changes to other modes before coupling to the inorganic modes.”

Although the delayed coupling between the organic and inorganic sublattices could point to a diminished importance of the organic molecules, there are other ways in which the organic ions can contribute to the optoelectronic properties of the entire material. Essentially, the charge dipole in each organic molecule could orient in a specific direction, screening the photoexcited electrons that would be generated within a solar cell.

“The lifetimes of photoexcited electron-hole pairs need to be long in solar cells for us to harvest charges to produce current; dielectric screening could increase these lifetimes,” Schaller said.

An article based on the study, ​“Infrared-pump electronic-probe of methylammonium lead iodide reveals electronically decoupled organic and inorganic sublattice,” appeared in the January 29online issue of Nature Communications.

The research was funded by the DOE’s Office of Science.